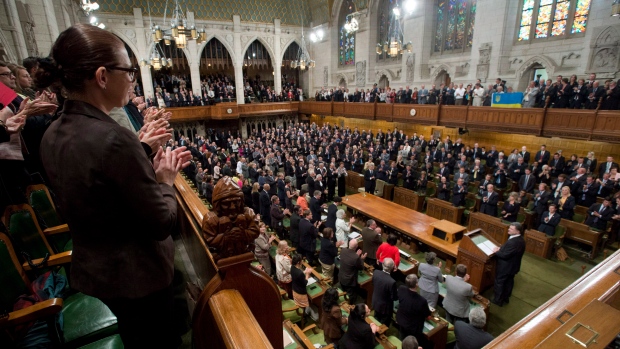 When Ukrainian President Volodymyr Zelensky addresses Parliament on Tuesday, he will be the third Ukrainian president to do so, joining a long list of world leaders and dignitaries to give a joint address to Canadian parliamentarians.

The address will be an opportunity for MPs, senators, and other special guests and government officials to hear directly from Zelensky in Ukraine on what that country is experiencing as it continues to defend itself from attacks ordered by Russian President Vladimir Putin.

Zelensky has garnered international accolades for his leadership in this moment, and continues to call on allied countries to offer his country further assistance, from military to humanitarian, while expressing thanks for the support offered to date.

He is not the first Ukrainian leader to come to Canadian policymakers with similar sentiments. His predecessor Petro Poroshenko delivered an address to Parliament on Sept. 17, 2014 as part of an official visit to Canada.

In that speech—punctuated by cheers and standing ovations—Poroshenko praised Canada for its support in the face of Russia’s military incursion in eastern Ukraine and its annexation of Crimea, and said that his country was “bleeding for its independence and its territorial integrity.”

Previous to that, on May 26, 2008 as part of a state visit, then-president Victor Yushchenko spoke about how democracy had “taken over” as the former Soviet republic pushed to assert independence following the Orange Revolution of 2004. He also expressed his gratitude for Canada supporting that country’s ongoing bid for NATO membership.

“Right now, I am overwhelmed with profound, sincere, absolutely light-filled feelings toward your country, towards this land. For me, like millions of Ukrainians, this country, this land is sacred,” Yushchenko said.

Zelensky’s address will not be preceded by the same degree of pomp and circumstance, including the on-arrival greeting by House and Senate officials, and the walk through Confederation Hall with the prime minister, given he will be the first world leader to appear virtually.

He’ll be the first to make his remarks inside the temporary West Block House of Commons, with the last world leader to speak to members of the House and Senate being Prime Minister of the Netherlands Mark Rutte in 2018, which took place in the now under-renovation Centre Block.

Here’s the full list of dignitaries who have delivered a joint address to Parliament since 1940s:

What questions do you have about Ukraine? Email dotcom@bellmedia.ca.