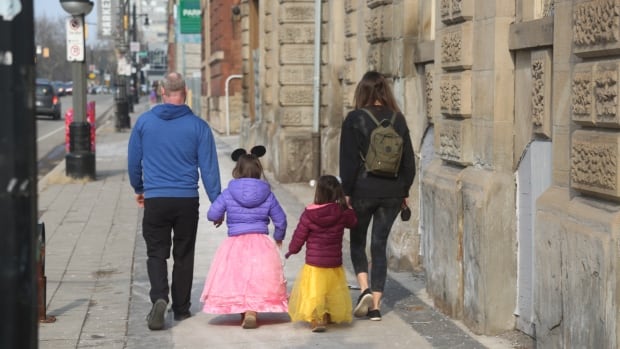 For Disney on Ice cast member Sarah Nolan, performing this week at Hamilton’s FirstOntario Centre is a full-circle moment, 12 years after she first auditioned for the show at the same venue.

The tradition to bring Disney On Ice to the city’s downtown is back until Sunday after a two-year hiatus due to the COVID-19 pandemic.

“It’s where it all started,” Nolan told CBC Hamilton earlier this week before opening night Thursday.

Since that initial audition, the Brantford resident has been touring the world with the family-friendly production, which marked 40 years of performances in 2021 and has visited 68 countries since it first began in the United States.

But Nolan hasn’t been back to perform in Hamilton since she joined the cast.

“My grandpa’s coming to the show on Thursday, and he hasn’t seen me skate in seven years. My parents are coming to the show, my sister, a couple of my cousins. So being able to be back and perform for them, oh my god, I’m getting emotional just thinking about it.”

As an ensemble cast member, Nolan plays a variety of roles when she’s on her skates, ranging from a green toy soldier in the Toy Story numbers to a seashell during “Under the Sea” performance.

Her favourite role, however, is that of a napkin during the “Be Our Guest” song.

“It’s completely different than anything you’re gonna see on any other Disney On Ice show because we skate for like a third of the number, and then all of a sudden, we’re up in the air for the rest of the number. It’s pretty cool to hear, the first time we all go up, the whole crowd going ‘wow!'”

Nolan is now hoping to get more people interested in skating for Disney On Ice, saying it’s the “best career a young skater can have.”

“There’s something super special about making a connection, especially with kids… and you give them a wave, and they wave back, it kind of breaks that barrier.”

Nolan and her husband, who is the show’s production stage manager, had plans to leave tour life and settle down before the pandemic cancelled their last tour.

“My husband and I weren’t necessarily supposed to do this tour. We were going to get off the road [before the pandemic hit], so as soon as I saw that we’re coming to Hamilton, I couldn’t believe it.”

After a nine-month forced break, Nolan decided she wasn’t ready to leave the tour just yet.

“My whole identity was really wrapped up [around skating], so it was interesting because I was able to really visit that and sit with how I had wrapped my identity [around] performing and who I was outside of that. That’s kind of a harsh reality to sit with,” she said.

“With being forced to get off the road [because of] COVID, [my husband and I] realized that the main thing was that we wanted to finish on our terms, and we’re now able to do that, and we’re so grateful for it.”

As a Disney On Ice cast member, Nolan is often away from her home in Brantford for six to nine months of the year, but the pandemic break made her realize the importance of family time.

“I think that the draw to get off the road and the draw to settle down and have a home of our own is definitely pulling a little bit harder right now.”

A return for FirstOntario Centre

Not only did cast members like Nolan have an unpredictable two years, but Hamilton’s FirstOntario Centre has also seen change in the pandemic.

The venue’s general manager, Andrew Nash, says the Disney On Ice comeback feels like a return to where things left off in March, 2020.

“March 12 was kind of the day that literally the entire year got cancelled, and we went from having one of our strongest years in the history of the venue to literally nothing in 24 hours.”

The venue served as a shelter for people experiencing homelessness for a few months in 2020 after they were forced to cancel every event that year, and it has taken a few forms since then.

“During the different waves of the [pandemic] … we went straight from homeless shelter into a little bit of the ice rentals and that kind of stuff, it looked like events might start up again, with the [Ontario Hockey League], of course, but then it all came crashing down again and back into lockdown.”

Nash said he is excited to see people ready to go back to the venue for Disney On Ice.

“It’s just really exciting to see the excitement in the community… It’s almost emotional a little bit, just the excitement to have this next step of moving forward and getting ourselves back to do what we do best.”