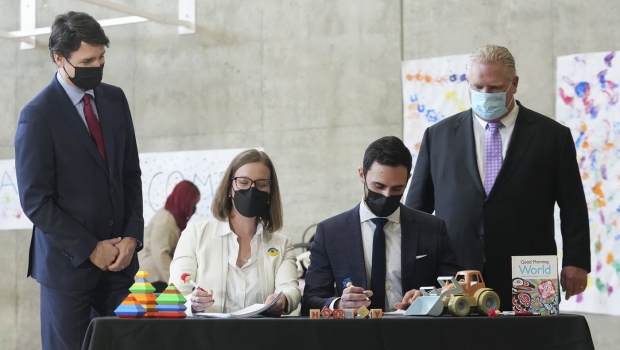 OTTAWA —
The federal families minister says coming child-care legislation will enshrine a long-term role for Ottawa in the daycare system — and the new deal with the New Democrats gives them some time to get it right.

Karina Gould says the legislation would also put into law the principles that provinces and territories agreed to in funding agreements, including to cut parent fees and create more spaces.

The original goal was to introduce a bill by this spring, Gould said in an interview with The Canadian Press. Now she has until the end of the year as part of an agreement with the NDP to land that party’s support in key votes in the House of Commons.

Experts say the government should now take its time.

Before the deal with the NDP, the thinking among child-care experts the Liberals leaned on for advice was that the Liberal minority government should move quickly on legislation, lest an election lead to a change in government and scuttle long-term spending plans.

Now that the deal would bring some stability and potentially keep the Liberals in power until 2025, the government is being urged to take the extra time to get the bill right.

Federal officials have been quietly checking in with a select number of experts on what should be in the new law.

A consultation document says the legislation could commit to “ongoing collaboration” between the federal, provincial and territorial governments over the system, including a pledge for “sustained federal funding.”

The paper, obtained by The Canadian Press, also suggests legislation could require annual public reports and a national advisory council as part of “various mechanisms” to ensure federal accountability.

But the document does not mention accountability measures for provinces should they not meet their own benchmarks. Those include creating more spaces over the course of agreements, cutting parent fees by an average of 50 per cent by the end of this year and reaching an average nationally of $10-a-day by 2026.

It also suggests a smaller role for the federal government in the national system to not step on areas of provincial and territorial jurisdiction.

The document notes that the legislation wouldn’t supersede the earlier child-care framework agreements the Liberal government negotiated with the provinces and territories during its first mandate. The law also wouldn’t “impose requirements” on provinces, territories or Indigenous Peoples, nor set conditions for funding outlined in one-on-one deals.

Those funding deals include provisions that allow the federal government to hold funding back if benchmarks aren’t met, but Gould suggested that was an avenue the Liberals are looking to avoid.

Gould said having to report on efforts may be a more powerful push.

The Liberals’ 2021 budget promised $30 billion in new spending on a national child-care system over five years, and $9.2 billion annually after that time.

The promised legislation would be a key, long-term lever to build a system that creates affordable spaces that are accessible countrywide and which also provide a quality daycare environment, said Martha Friendly, executive director for the Childcare Resource and Research Unit in Toronto.

“It’s one of the important pillars and cornerstones,” she said.

“It should be the best that it can be.”

Introducing a bill later this year and debating it through 2023 would let officials pen legislation that reflects early changes from the first tranche of federal spending, said Andrew Bevan, who has co-authored papers on the need for a child-care system and was chief of staff to former Ontario premier Kathleen Wynne.

Ontario became the final province to sign on to the system Monday.

Bevan said funding agreements with provinces and territories are a good starting point to legislate the kind of child-care system Canada needs.

This report by The Canadian Press was first published March 29, 2022.