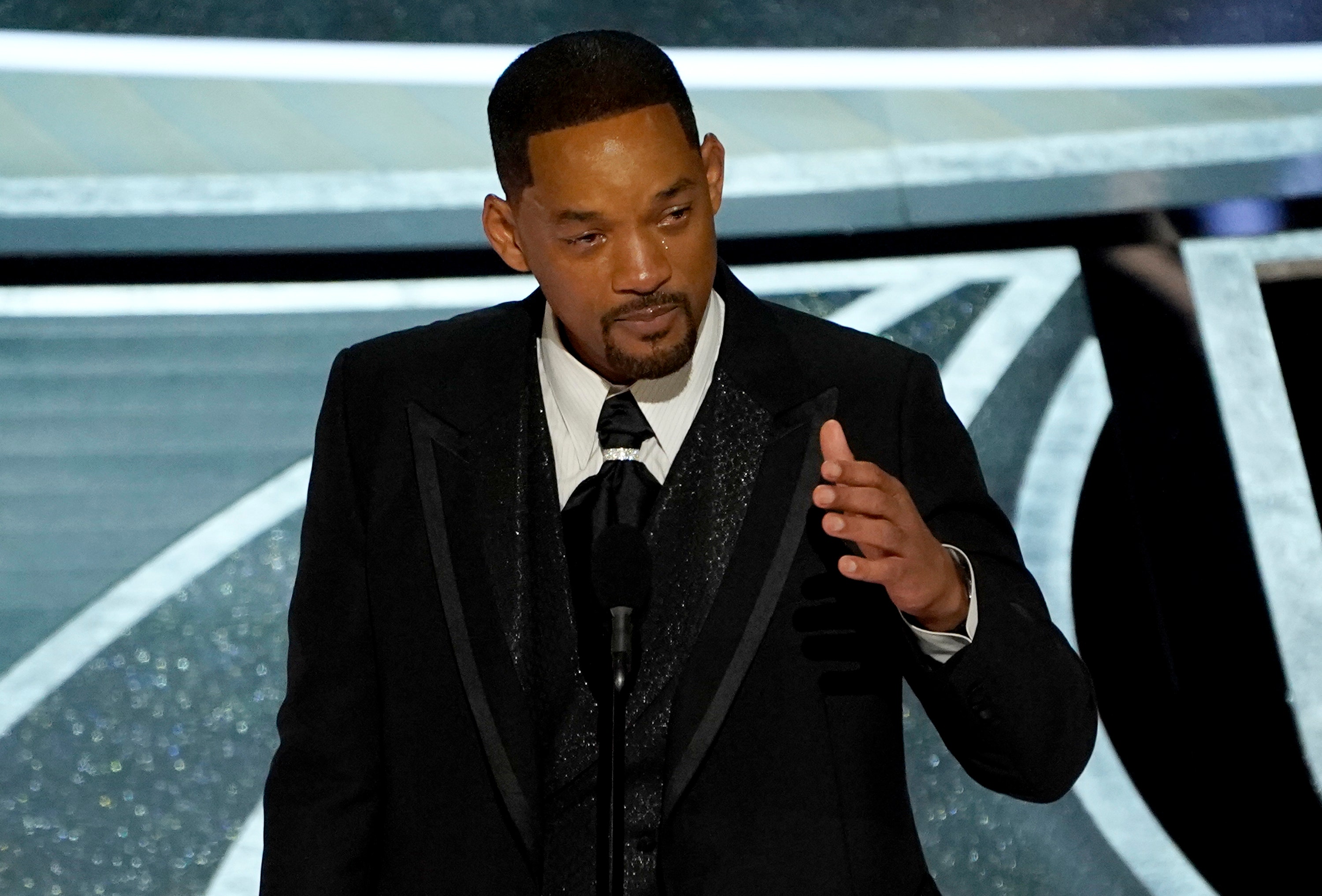 Will Smith and Chris Rock – along with the rest of the world – are still reeling in the aftermath of Smith’s viral smacking of Rock at the 94th Academy Awards.

Such was a moment that left millions of viewers stunned, embarrassed, confused – and heartbroken, especially considering to many, both men are beloved throughout the world for their careers and personalities as well as for what each has contributed to the art of showbiz.

It’s been nearly a full week since the on-camera assault and the conversation surrounding the incident has shifted in many directions as the winds from the sides of Rock, Smith, the Academy and the public continue to swirl in a hurricane-like fashion.

While it remains to be seen what type of disciplinary action, if any, the Academy will bestow upon Smith after it announced on Wednesday it has “initiated disciplinary proceedings” against Smith for violating “the Academy’s Standards of Conduct,” many questions still loom whether the “King Richard” performer will be able to lead a productive career.

Fox News Digital spoke with a number of leading crisis managers and entertainment attorneys who were watching the infamous smack. In assessing the public damage Smith might have done to his image, his career could be spared in Hollywood by the fact he carries a long record of positive action which may be enough to wash out a proverbial stain on his jacket, according to experts. However, his brand on the other hand “has been forever tarnished.”

CHRIS ROCK WAS ‘SHAKEN’ BY WILL SMITH INCIDENT BACKSTAGE AT OSCARS: SOURCE

Will Smith and Chris Rock are pictured in the “Get a Job” episode of “Fresh Prince of Bel-Air.”
( Jan Sonnenmair/NBCU Photo Bank)

Contents hide
1 ‘FRESH PRINCE’ TO ‘FRESH PRINTS’?
2 ‘CELEBRITIES ARE IN A UNIQUE PLACE’
3 ACADEMY ‘UNDER PRESSURE’
4 ‘DAMAGED GOODS’ FOR TIME BEING?

“Will Smith is a beloved performer with far too many blockbuster performances to disappear from public view or be permanently canceled or shunned by Hollywood,” Evan Nierman, CEO of global crisis PR firm Red Banyan and author of the book “Crisis Averted,” told Fox News Digital.

“However, there is no doubt that his brand has been forever tarnished by his violent actions. It used to be that he was known as the ‘Fresh Prince,’ but now when we think of Will Smith we will be thinking of the ‘fresh prints’ he left across Chris Rock’s cheek.”

Entertainment lawyer Domenic Romano believes Smith does have a viable path to regaining favor with the Academy and would need time to pass in order to do right in the eyes of his Hollywood peers who were offended by his physical action.

“He could face sanctions from the Academy short of expulsion, including potential suspension, but a lot will depend on what actions he takes to speak out against violence and whether he sends a clear and consistent message that his response against a poor-taste joke is not acceptable,” the NYC-based managing partner explained, adding, “if he goes out of his way to make amends, he should recover within the next twelve months, if not sooner.”

Whether industry insiders or the public believe Rock’s joke about Jada Pinkett Smith’s bald head was in poor taste, Niermann pressed that despite the widened spectrum of where people fall regarding their opinions of the entire incident, Smith likely has a lot of idealists who can understand why he behaved the way he did

Fellow “Girls Trip” actress and comedian Tiffany Haddish told People magazine that she saw the reaction as Smith simply defending the honor of his wife who has publicly spoken to her battle with alopecia – an autoimmune condition that causes hair loss.

Meanwhile, comedian and actor Michael Rapaport – whose wife is Black – detailed his neutral stance on the Monday edition of his “I Am Rapaport” stereo podcast and why “talking greasy” can have repercussions but maintained his position that violence should be the last resort under many circumstances.

Niermann also spoke to a sentiment expressed by Rapaport that Rock has a “firm chin” and stood strong in the face of Smith’s open right hand while keeping his composure.

The Academy will meet again on April 18 to further determine whether “any disciplinary action, which may include suspension, expulsion, or other sanctions permitted by the Bylaws and Standards of Conduct” will be levied against the Will Smith for smacking Chris Rock at the 2022 Oscars.
(iStock/Getty)

‘CELEBRITIES ARE IN A UNIQUE PLACE’

“Will Smith may enjoy some support from fans who believe his attack was somehow a display of fierce love for his wife, but those people are likely to be in his corner no matter what,” said the crisis management expert. “Celebrities are in a unique place when it comes to career and reputation rehabilitation because their massive public profile attracts die-hard supporters who are eager to forgive and forget actions that would destroy a ‘normal’ person’s career or life.”

“Expect Chris Rock to get a huge boost in his career from this ugly episode, which is perhaps a major silver lining to this crisis,” Niermann added. “Not only did Rock display physical toughness in shaking off the forceful smack, but he didn’t miss a beat, demonstrating a remarkable ability to conduct himself with poise and professionalism despite the assault.”

“Celebrities are in a unique place when it comes to career and reputation rehabilitation because their massive public profile attracts die-hard supporters who are eager to forgive and forget actions that would destroy a ‘normal’ person’s career or life.”

Rock’s ticket sales for his comedy tour have exploded following the dust-up, and he recently performed for a sold-out crowd at Boston’s Wilbur Theater.

In his first performance since the incident, Rock said, “I had a whole list of jokes. I had a whole show I wrote before this weekend, and I’m still kind of processing what happened.”

CHRIS ROCK DRAWS SOLD-OUT CROWD AT FIRST SHOW SINCE OSCARS: ‘YOU CAN’T MISS AN OPPOTUNITY LIKE THIS’

Meanwhile, the Academy said on Wednesday that it was providing Smith with “at least 15 days’ notice” before a vote occurs, giving the actor – who has since publicly apologized to Rock – an opportunity to say his piece in a written letter

The Academy’s board of governors meets again on April 18 to further determine whether “any disciplinary action, which may include suspension, expulsion, or other sanctions permitted by the Bylaws and Standards of Conduct,” will be levied against the actor.

Celebrity attorney Christopher Melcher further relayed to Fox News Digital that Smith will need to exhibit stout contrition in order to win his case versus the Academy.

Will Smith attends the 2022 Vanity Fair Oscar Party hosted by Radhika Jones at Wallis Annenberg Center for the Performing Arts on March 27, 2022,, in Beverly Hills, California.
(Photo by Kevin Mazur/VF22/WireImage for Vanity Fair)

“The Academy is under pressure to do something, but any discipline must match the conduct. When Will Smith appears before the academy to explain his actions, it is critical that Smith delivers his message correctly – in tone and content,” said the lawyer who has represented numerous A-list clients.

“[Smith] acted impulsively then, but now is the time to be strategic. When people are accused of doing something aggressive, the worst thing they can do is present an aggressive defense,” Melcher continued, adding that doing so “only confirms the allegation.”

Melcher maintained that Smith must show an honest understanding of his actions before anyone will want to hear why he acted in the manner he did on March 27.

“If Will comes to the Academy with remorse, his message will be better received. After admitting how harmful his actions were, the Academy should be more receptive to hearing why the joke triggered him. He can point out that he acted on impulse, without attempting to justify slapping Chris Rock,” he said.

“He can then share how painful his wife’s condition has been on her, and why he acted without thinking,” Melcher added. “The more he can make people understand how they might have reacted the same way, the more sympathetic he becomes. He can also point to the damage to his reputation as a consequence that he has already paid. This may lead the Academy to conclude that discipline is not needed, or perhaps a short suspension is in order.”

Will Smith cries as he accepts the award for best performance by an actor in a leading role for “King Richard” at the Oscars on Sunday, March 27, 2022, at the Dolby Theatre in Los Angeles.
(AP Photo/Chris Pizzello)

‘DAMAGED GOODS’ FOR TIME BEING?

In the interim, Niermann believes Smith will eventually be able to bounce back from the public embarrassment but is presently considered untouchable until a ruling is handed down and time has passed.

“Will Smith is an extraordinary talent who will continue to be sought after for years to come.  But until he puts this behind him, don’t expect most studios to rush to engage him,” he said. “For the time being, he is damaged goods, but I suspect he will overcome the stigma over time provided he takes the proper steps and avoids further bad decisions or other massive lapses of judgment and self-control.”