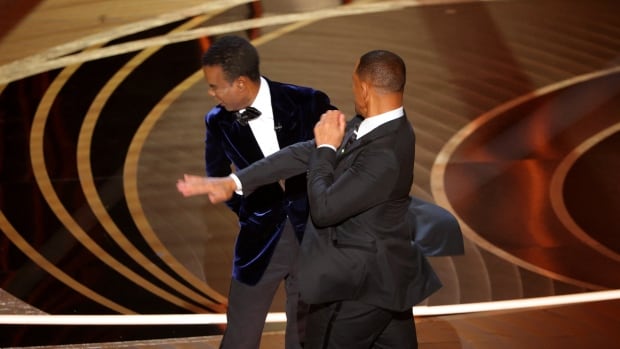 The 94th Academy Awards on Sunday maintained a buoyant spirit until Will Smith took great offence to a joke by presenter Chris Rock about the best-actor nominee’s wife, Jada Pinkett Smith.

Rock was introducing the award for best documentary when he joked to Smith that he was looking forward to a sequel to G.I. Jane. Smith then stood up from his seat near the stage, strode up to Rock and slapped him.

After sitting back down, Smith shouted at Rock to “keep my wife’s name out of your f–king mouth.”

“That was the greatest night in the history of television,” Rock said before going back to presenting the award for best documentary, which went to Questlove’s Summer of Soul, about the 1969 Harlem Cultural Festival.

The incident between Smith and Rock shocked the Dolby Theatre audience in Los Angeles and viewers at home.

Before that, the show had been running fairly smoothly.

Rock’s comment was in reference to Pinkett’s hair loss.

It’s not the first time that Rock has targeted Pinkett, having made several jokes at her expense when he hosted the Oscars in 2016, according to The Associated Press.

In 2018, the actress revealed she was diagnosed with alopecia, an autoimmune disorder.

She has frequently posted about her struggles with the condition on social media, and in July 2021, she and her daughter Willow shaved their heads.

Roughly 40 minutes later, Smith referenced the moment while accepting the Academy Award for best actor, for his performance in King Richard, the father of tennis stars Venus and Serena Williams.

“Richard Williams was a fierce defender of his family,” Smith said.

“I’ve been called on in my life to love people and to protect people, and to be a river to my people. I know to do what we do, you got to be able to take abuse. And have people talk crazy about you. People disrespect you and smile like it’s OK.”

Later, Smith said actor Denzel Washington pulled him aside after the incident, telling him, “At your highest moment, be careful, that’s when the devil comes for you.”

In a statement to ABC News, the Los Angeles Police Department said they are aware of the incident and that Rock had declined to file a police report.

“If the involved party desires a police report at a later date, LAPD will be available to complete an investigative report,” the statement said.