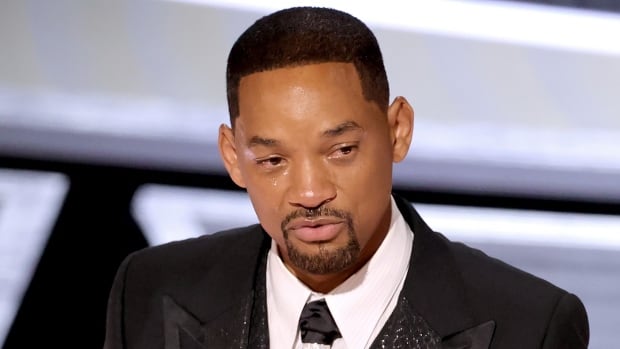 The day after slapping Chris Rock on the stage of the 94th Academy Awards, Will Smith issued an apology to the comedian, the academy and viewers at home, saying he was “out of line” and that his actions are “not indicative of the man I want to be.”

The fallout of Sunday’s show continued Monday as the Academy of Motion Pictures Arts and Sciences condemned Smith’s onstage assault and said it would launch an inquiry into it. Later in the day, Smith gave a stronger apology than he did in his best actor acceptance speech, which notably didn’t include apologizing to Rock.

“Violence in all of its forms is poisonous and destructive,” said Smith on Monday.

“My behaviour at last night’s Academy Awards was unacceptable and inexcusable. Jokes at my expense are a part of the job, but a joke about Jada’s medical condition was too much for me to bear and I reacted emotionally. I would like to publicly apologize to you, Chris. I was out of line and I was wrong. I am embarrassed and my actions were not indicative of the man I want to be. There is no place for violence in a world of love and kindness.”

Smith added apologies to the film academy, producers of the telecast, attendees, viewers and the Williams family. Smith was honoured for his role as Richard Williams, father of Venus and Serena.

“I am a work in progress,” added Smith.

Earlier Monday, the film academy said, “The Academy condemns the actions of Mr. Smith at last night’s show. We have officially started a formal review around the incident and will explore further action and consequences in accordance with our bylaws, standards of conduct and California law.”

WATCH | Will Smith smacks Chris Rock on stage during Oscars:

Fallout from Will Smith’s slap at the Oscars

Actor Will Smith issued an apology to comedian Chris Rock for the Oscar night slap, calling his behaviour ‘unacceptable and inexcusable.’ Reactions to Smith’s slap were deeply divided — some applauding him for defending his wife, while others condemned his actions. 2:02

Smith stunned the Dolby Theatre crowd and viewers at home when he took the stage during Rock’s remarks after the comedian made a joke about Jada Pinkett Smith, Smith’s wife. Rock said, “Jada, I love you. G.I. Jane 2, can’t wait to see it.”

The joke touched a nerve. Pinkett Smith, whose head is shaved, has spoken publicly about her alopecia diagnosis. Rock has also previously joked about her. Rock hosted the 2016 Oscars, when some were boycotting the ceremony over the #OscarsSoWhite group of nominees, including the Smiths. Said Rock: “Jada boycotting the Oscars is like me boycotting Rihanna’s panties. I wasn’t invited.”

Smith strode on stage and slapped Rock across the face. Back in his seat, Smith twice shouted for Rock to “get my wife’s name out your f–king mouth.” His words echoed clearly throughout the Dolby, though ABC cut the audio for about 15 seconds. Within an hour, Smith won best actor. During his acceptance speech, he apologized to the academy.

‘There will be consequences, I’m sure’

After the show Sunday night, the academy posted a statement condemning violence. The Los Angeles Police Department said Sunday it was aware of a slapping incident at the Oscars but said the person involved had declined to file a police report.

Some academy members, like writer-producer Marshall Herskovitz, called for the academy to take disciplinary action against Smith.

“He disgraced our entire community tonight,” wrote Herskovitz on Twitter.

I call upon the Academy, of which I am a member, to take disciplinary action against Will Smith. He disgraced our entire community tonight.

Whoopi Goldberg, a member of the Academy’s board of governors, said Monday on The View: “We’re not going to take that Oscar from him. There will be consequences, I’m sure.”

The Screen Actors Guild also weighed in. The film, television and radio union called the incident “unacceptable” and said “violence or physical abuse in the workplace is never acceptable.” SAG said that it had been in contact with the academy and ABC, and that it doesn’t comment on the guild’s own disciplinarian process.

Some questioned whether Smith should have been allowed to continue to sit front and centre after smacking Rock. Several stars rushed to counsel and calm Smith, including Denzel Washington, Bradley Cooper and Tyler Perry. But the timing was also awkward because the best actor category was due up soon after, and Smith had long been considered a lock for the award.

“I know we’re all still processing, but the way casual violence was normalized tonight by a collective national audience will have consequences that we can’t even fathom in the moment,” wrote Janai Nelson, president and director-counsel of the NAACP Legal Defense Fund, on Twitter.