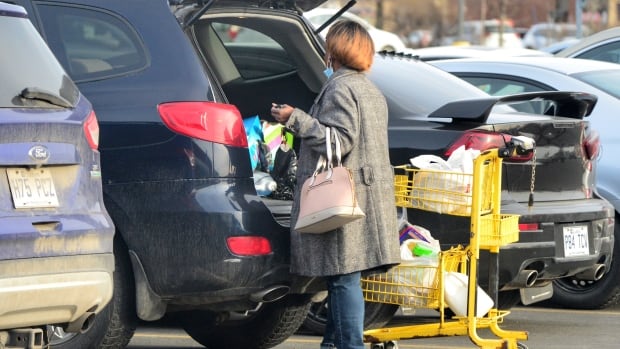 Everything seems to be getting more expensive. Food, gas and housing prices are on the rise while paycheques are slow to keep pace.

The CBC News series Priced Out explains why you’re paying more at the register and how Canadians are coping with the high cost of everything.

Not only has the COVID-19 pandemic killed or sickened millions of people around the world and shuttered parts of the global economy, but many insist it is also responsible for driving inflation to levels not seen in decades.

The latest figures from Statistics Canada show the country’s inflation rate hit 5.1 per cent in January, its highest level since 1991. Rising costs for staples such as gasoline and groceries have intensified the pressure on Canadians who were already straining to make ends meet.

Economists have attributed steeper prices to a variety of factors, including supply chain disruptions and labour shortages, although a fair few politicians and pundits across North America have also blamed inflation on the government stimulus cheques sent to people whose livelihoods were affected by COVID-19 restrictions.

While companies have cited greater shipping costs and COVID-related accommodations as reasons for higher prices, there is a growing sense, particularly in the U.S., that some companies are taking advantage of inflation anxiety to raise prices.

Profiteering is “a potential explanation ― an underappreciated one, an under-examined one,” said David MacDonald, senior economist at the left-leaning Canadian Centre for Policy Alternatives.

Jimmy Jean, chief economist for the financial services firm Desjardins Group, said the inflation narrative is so entrenched in “society’s psychology” right now that “it’s not a stretch to think that some businesses will raise prices or even exaggerate those price increases to kind of tease out to see [at what level] we’ll see a negative impact.”

Profitable times — for some

Among the items that have seen significant inflation are gasoline, real estate, new and used vehicles and groceries.

Macdonald said that record-high home prices right now are largely the result of record-low interest rates while a chip shortage is the main culprit for the high cost of cars.

The cost of gasoline is largely determined by the global price of oil, which has been influenced by Russia’s invasion of Ukraine, and has been hovering around $100 a barrel. As Macdonald points out, when the cost of a barrel of crude goes up, oil and gas companies are “not the ones being squeezed.”

Energy analysts say the current unprecedented prices at the pumps across North America are at least partly a result of producers struggling to increase capacity after the industry scaled back production early in the pandemic. At the time, already low prices plunged further as people more or less sheltered in place.

At the moment, the biggest producers, including Exxon, Chevron and BP, are posting profits they haven’t seen in years. Yet according to reporting by the U.K.’s Guardian newspaper, they have rejected efforts to reduce the pain at the pump in the U.S. by releasing more product.

No single factor behind price hikes

Oil and gas is hardly the only sector enjoying higher profits while consumers pay more. A similar story is unfolding for grocery store chains, home and auto insurance companies, Starbucks and Burger King, to name a few.

“You can’t pinpoint one single factor [for higher costs], so that tells me that there’s perhaps a broad spirit of raising prices in order to offset costs ― or just because it’s profitable to do so.”

Macdonald said some executives freely admit to raising prices on investor calls, where they are more candid and forthcoming about how they are increasing shareholder value.

In November, Noel Wallace, CEO of Colgate-Palmolive (which makes a wide array of consumer goods), said on an investor call, “what we are very good at is pricing … Whether it’s foreign exchange inflation or raw and packing material inflation, we have found ways over time to recover that in our margin line.”

Andre Schulten, chief financial officer for Procter & Gamble (another producer of household products), told investors in September, “those price increases that have gone into the market … we have not seen any material reaction from consumers in terms of volume off-take [reduction in purchases].”

These and other examples are collected in Corporate Profiteering Findings, a report by the U.S. advocacy group Groundwork Collaborative released earlier this month. The report not only includes comments by executives in investor calls but juxtaposes companies’ complaints about higher operating costs with their willingness to spend millions — as Procter & Gamble, Best Buy and Whirlpool did — on buying back their own stock, a way to return cash to shareholders.

The story of beef

In many ways, it’s in grocery stores where inflation is being felt most acutely. Statistics Canada data reveals that prices are up year-over-year for everything from fresh fruit (8.2 per cent) to baked goods (7.4 per cent) to chicken (nine per cent).

WATCH | Following food prices from the farm to the store:

Following rising food costs from the farm to the store

Increasing expenses along the supply chain and even the weather are some factors behind rising food costs Canadians are seeing at the grocery store. 2:37

Shipping costs and adverse growing conditions for certain commodities are among the challenges affecting prices.

“Our gross margins in food are not necessarily up,” Metro CEO Eric La Fleche said at a virtual news conference following the release of the grocery chain’s latest earnings report earlier this year.

“Actually, we’re not passing on all the cost increases that we’re getting from our suppliers.”

One grocery item that exemplifies a larger pricing trend is beef. A major reason it has become so expensive is market concentration, said Iain Aitken, a veteran cattle rancher in Belmont, Man., in an interview with CBC News.

In Canada, 90 per cent of beef processing is done in three plants — two owned by U.S.-based conglomerate Cargill, the other run by Brazil-based JBS. Their market power gives them the ability to dictate prices on both the production and retail side.

Meat packers “will jump on any opportunity to drop the price that they are paying for cattle,” said Aitken, which often means building up an oversupply of cattle in the system. At the same time, the packers can raise the prices they charge grocery stores, which in turn pass on the cost to consumers.

Aitken said that while retail prices have risen significantly during the pandemic ― for example, according to Statistics Canada, a kilogram of sirloin steak went from $21.88 in March 2020 to $26.09 in January 2022 ― the price for cattle has basically “flatlined.”

“As farmers, we’re feeling sorry for the consumers, paying what they’re having to pay, knowing that we’re not getting any more for our cattle than we were last year, or three years ago,” he said.

In a blog post in late December, U.S. economist Matt Stoller estimated that 60 per cent of U.S. inflation was the result of corporate profiteering, pointing out that the stock market has rewarded companies that have found ways to increase their margins during the pandemic.

Stoller, the author of Goliath: The 100-Year War Between Monopoly Power and Democracy, has written extensively on the broader economic effects of market concentration and has specifically cited U.S. beef production.

Earlier this month, JBS agreed to pay $52.5 million US to settle a beef price-fixing lawsuit in the U.S. Filed by grocery stores and wholesalers, the suit accused JBS, along with Cargill, National Beef and Tyson Foods, of colluding to suppress the number of cattle being slaughtered to drive up the price of beef.

As part of the settlement, JBS did not admit any wrongdoing. The company, along with the other major players in U.S. beef production, says supply and demand, rather than anti-competitive behaviour, is what determines beef prices.

The issue of market concentration transcends pandemic-era inflation. Economists have pointed out that a lack of competition in Canada has led to some of the highest prices in the world for products and services such as air travel, cellphone plans and banking.

“In industries where Canadian companies are sheltered for some reason from foreign competition, you’ll see a greater ability to concentrate,” said Jennifer Quaid, an associate professor at the University of Ottawa and an expert in competition law.

Denise Hearn, a senior fellow at the Washington, D.C.-based American Economic Liberties Project, has noted that “Canada has a longstanding industry-concentration problem,” which has led to, among other things, “low business dynamism, stifled innovation and harm to consumers.”

The federal government recently announced that it is undertaking a review of Canadian competition law, with an eye on addressing issues such as wage-fixing and deceptive pricing.

While academics, lawyers and regulators debate Canada’s competition laws, a grocery scandal from a few years back has resurfaced.

In January, an Ontario judge gave the go-ahead to a class-action lawsuit against the major players in Canada’s packaged bread market — including Loblaw, Sobeys and Metro — alleging a 20-year price-fixing scheme on “soft top” sandwich loaves.

David Macdonald said that while “it is tempting to think this is nefarious behaviour,” this can be “how businesses operate when there isn’t a lot of competition.”