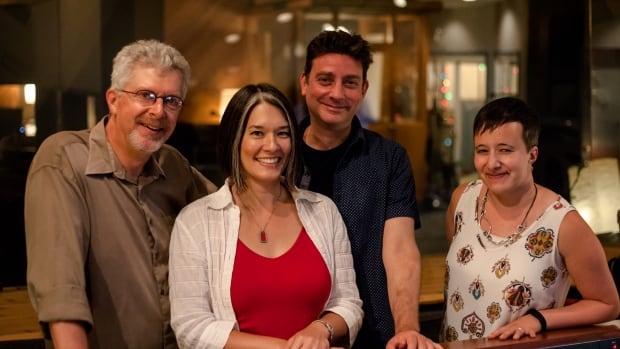 Though Whitehorse jazz singer Fawn Fritzen sang and co-wrote some songs on Arancina, an album by The David Restivo Trio, she said she felt like just a small part of the project.

So when the album was first nominated for a 2022 Juno award, Fritzen didn’t immediately realize that she was up for the award, too.

“I started getting all these messages saying like, ‘congratulations on your Juno nomination,’ and I’m like, oh, I wasn’t really thinking about this in terms of me,” the Whitehorse-based singer told CBC with a laugh.

“But I’m so thrilled that the music is getting this recognition.”

Arancina features Fritzen on vocals, and she also co-wrote a couple of the songs with her partner Restivo and designed the album cover.

The album is among five nominees for Jazz Album of the Year (Group) at the 2022 Juno Awards, to be handed out in May. The Juno nominees were announced on Tuesday.

Restivo, a B.C.-based pianist and composer, has been playing professionally since he was a teenager and over the years has played with a who’s-who of Canadian jazz. In 2001, he won a Juno as part of the Rob McConnell Tentet.

Fritzen is delighted that Restivo has now been nominated for his own project, which mostly features his own compositions.

“To me, it feels like he’s finally getting the recognition that he really deserves to have. And I’m really grateful to be along for the ride,” she said.

Several of the pieces Restivo composed for Arancina were inspired by a trip he and Fritzen took to Sicily in 2019, not long before the trio went into studio to record. Another song, Bittersweet Goodbye, was inspired by Fritzen and Restivo’s long-distance relationship.

“I remember that he’d written this melody. So I thought, oh, I’m going to go back and revisit it and see if I can make something of it. And yeah, I think that the lyric that came out of it really reflects what we were feeling at the time,” she recalls.

The album itself was recorded in one day in 2019, with bassist Jim Vivian and drummer Alyssa Falk rounding out the trio. Fritzen says the three players have a special chemistry that really came across that day.

“Hearing that in the studio, I just knew it was such a special album,” she recalled.

“The whole experience has just been so joyful for me … every step of the way.”

Fritzen hopes she can be in Toronto for the Juno award ceremony on May 15. She’s already started “scheming and planning” to make it happen, she says.

“I love Toronto, and I haven’t been back in a few years,” she said.

“Everybody else who’s nominated in that group and all the jazz categories are folks that we know and love. So regardless, you know, it’ll just be such a fun time to be able to see everybody in person and get to celebrate.”