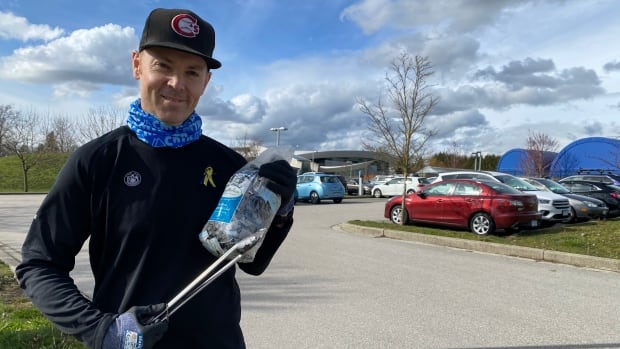 For Vancouver runner David Papineau, getting out the door to exercise involves putting on his shoes but also grabbing gloves, tongs and a plastic bag.

For the past year, the 53-year-old long distance runner has collected discarded masks, wipes and gloves — pandemic tools left as litter — as he takes excursions across the city, some as long as four hours.

During a Sunday run through the city, Papineau told CBC News that he decided to start picking up masks and other pandemic garbage as he got increasingly bored with pandemic life and had few races to train for.

“I needed something to motivate me to get out the door,” he said. “And the second thing was general disgust with the amount of litter on the ground, masks in particular.”

He also said he undertook the project as a way to “do his part” to help with the pandemic after considering the efforts other people were making, such as health-care workers.

For the past year, David Papineau, 53, has collected discarded masks, wipes and gloves as he goes on long runs across the city. 0:20

Once he started, he was amazed by how many masks and other bits of pandemic detritus he came across.

“I’ve covered probably half the city,” he said. “There are masks everywhere … Vancouverites are really good at wearing masks, but really bad at keeping them on their faces.”

In 2020, residents in the region threw out 528 million pieces of personal protective equipment (PPE), including 109 million masks, 48 million wipes and 371 million gloves, according to Metro Vancouver.

Officials like Karen Storry, an engineer for waste services with Metro Vancouver, say masks and gloves have been important over the course of the pandemic, but users should take steps to ensure they end up in a garbage bag and then the landfill rather than as litter.

“Most disposable masks in B.C. are made of multiple plastic fibres and cannot be recycled. The responsible thing is to put them in the garbage,” she said.

While the magnitude of the PPE waste may sound like it is overwhelming the system, it only accounts for about 0.5 per cent of total waste in the region.

Storry recommends people use and wash reusable masks if they want to cut down on potential waste from plastic masks.

As of March 11, British Columbians no longer have to wear masks in low-risk, indoor public spaces, which could reduce the amount of waste they produce.

Papineau is encouraging others to take up litter collection, whether it’s on their own, or through city programs such as Vancouver’s Adopt-a-Block.

That’s how he got started. The city provided tongs and reflective vests, but Papineau says he has picked up so much garbage, he had to buy a second pair of tongs.

“There’s too much litter in downtown Vancouver. We tell people what a beautiful city we have. It doesn’t take too much to pick up a piece of garbage.”

WATCH: This runner cruises Vancouver’s street picking up masks and other waste

David Papineau finds most of the masks he picks up near parked cars and says they most likely fall onto the ground as people get in and out of vehicles. 0:40

Papineau finds most of the masks he picks up near parked cars and said they most likely fall onto the ground as people get in and out of vehicles.

He said it can be tricky carrying tongs and a plastic bag while he runs, but he’s learned to manage it all and enjoys calling himself a “plogger,” which is a term devised in Sweden in 2016 for people who run and pick up garbage.

“Every little bit makes a difference,” he said.