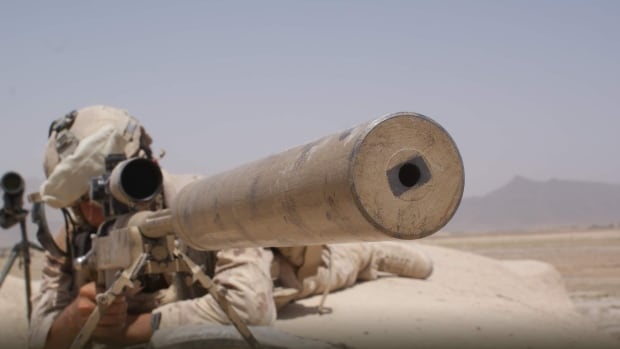 In Afghanistan, he was nicknamed Wali.

And the name stuck for the former sniper with the Royal 22e Regiment, who — earlier this week, in the dead of night — crossed the border into Ukraine from Poland, answering a call from Ukraine’s president for a foreign legion to help repel the Russian invasion.

The border was a surreal experience, even for a former Canadian soldier used to the unpredictability of war in the sun-scorched grape fields of Kandahar. Wali said he and the three other former Canadian soldiers who made the journey with him were greeted with hugs, handshakes, flags and photos by Ukrainians after they crossed the border.

“They were so happy to have us,” said Wali (CBC News has agreed to identify him only by his nom de guerre to protect his family’s safety). “It’s like we were friends right away.”

Wali wouldn’t say exactly where he crossed the border. He said he was struck by the tide of refugees washing up in Poland.

There were buses everywhere, he said, and people bundled against the cold trudging on foot toward the checkpoint and safety. On his way deeper into Ukraine, he said he saw scattered bits of garbage and empty vehicles abandoned by their owners — who apparently hiked the final few kilometres over the frozen frontier.

‘I want to help them’

The sight of people whose lives have been ripped apart by war touches everyone but it digs a little deeper for soldiers and veterans, who witness such scenes with more painful regularity.

“I want to help them. It’s as simple as that,” said Wali, who also did a stint as a foreign fighter with the Kurdish forces which battled Islamic State extremists in northern Iraq several years ago.

“I have to help because there are people here being bombarded just because they want to be European and not Russian.”

A Canadian veteran — and former sniper — heads to Ukraine to fight against the Russian invasion. 2:00

Since crossing into Ukraine, he and the other veterans have taken shelter in a partially renovated home. They are going through the final steps of linking up with Ukrainian authorities who want to place them with the army’s territorial battalions — the recently reorganized reserve unit of citizen-soldiers, a force the country had hoped eventually to build up to 10,000 officers and 120,000 volunteers.

The journey from life as a civilian computer programmer with a young family in Canada to the danger and uncertainty of the biggest war Europe has seen in seven decades has been nothing short of mind-bending, Wali said.

“A week ago I was still programming stuff,” he said. “Now I’m grabbing anti-tank missiles in a warehouse to kill real people …That’s my reality right now.”

Wali will miss his son’s first birthday this week. He called it the “hardest part” of the decision to join the fight in Ukraine. His wife was opposed to the idea, he said: “You can imagine what she said and how she thinks.”

CBC News has been in contact with half-a-dozen Canadian veterans in various stages of joining the fight in Ukraine. Most were unwilling to speak on the record.

A former member of the Royal Canadian Regiment — who asked not to be identified, even by a nom de guerre — said he has a personal stake in the war. He spent five years in Ukraine and has a Ukrainian wife and a young daughter.

“I don’t think the Ukrainians deserve what’s going on,” said the former soldier. He heads up a humanitarian organization called the Norman Group, which has volunteered to deliver aid and assistance in the eastern portion of Ukraine where Russia has fought an eight-year proxy war against the pro-western government in Kyiv.

He said the Ukrainians have been asking the foreign fighters to sign three-year contracts with the territorial defence forces. Many of the volunteers are reluctant.

In an interview with CBC News before the war, Denys Podanchuk — a civilian adviser to the commander of Ukraine’s special forces and the territorial defence units — said that the citizen-soldiers needed to sign those contracts in order to receive all of the legal protections and benefits the government in Kyiv could offer.

“We have said in our law that all members of resistance have all the [same] rights as soldiers in our army,” Podanchuk said in Kyiv in early February. “All members of this legal volunteer defence group … all of them have equal rights, social rights, as legal soldiers.”

Just before the outbreak of hostilities with Russia, the Ukrainian parliament passed sweeping legislation mandating national resistance among citizens. The aim of portions of the law was to ensure that, in the event of capture, registered citizen-soldiers would be afforded the protection of the Geneva Conventions.

The addition of foreign volunteers was not something Podanchuk discussed.

There is a law in Canada that dates back to 1937 — called the Foreign Enlistment Act — which was designed to discourage Canadians from fighting in the Spanish Civil War. It would not specifically exclude people from signing up to fight for Ukraine.

It prohibits people from fighting with a foreign country against an ally of Canada.

The peril of paramilitary service

“There’s an argument to be made, I think a very strong one, that it would be illegal to serve in the armed forces of Russia,” Tyler Wentzell, a doctoral candidate of law at the University of Toronto Faculty of Law who studied the foreign fighters and the legal responses to them.

“An individual fighting for those groups who is captured is perhaps less likely to be extended the courtesies of international humanitarian law, the protections under the Geneva Conventions and otherwise,” he said. “So I think it would be in anyone’s best interests if they were to go to serve with the recognized armed forces of Ukraine.”

The Liberal government appears to walk a tightrope every time it’s asked about Canadians signing up to fight for Ukraine.

“Of course, we understand Canadians’ desire to join our Ukrainian friends to fight,” Defence Minister Anita Anand said on Thursday — before turning the question into a straight-up recruiting pitch for the Canadian Armed Forces, which has struggled with recruitment in the last several years.