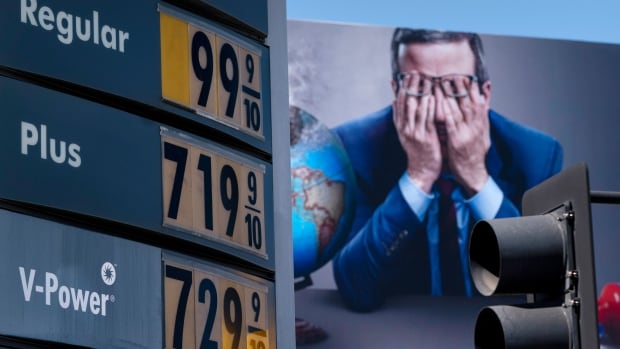 U.S. President Joe Biden announced a ban on Russian oil and other energy imports Tuesday in retaliation for the invasion of Ukraine.

Biden made the announcement at a press conference in the White House’s Roosevelt Room, saying Russian crude oil, natural gas and refined products made from them will be denied entry to the U.S. starting immediately.

“Americans have rallied to support the people of Ukraine and made it clear we will not be part of subsidizing Putin’s war,” Biden said.

The development is the latest in a series of moves designed to economically punish Russian President Vladimir Putin for his unprovoked invasion of Ukraine.

Oil prices have skyrocketed since the invasion. Russia is one of the biggest producers of oil in the world, responsible for roughly 10 per cent of global supply.

The U.S. imported roughly 200,000 barrels a day of Russian crude oil last year, and about twice that much of refined products, like fuel oil and other distillates. That’s about 10 per cent of the 6.5 million barrels of oil the U.S. imports every day, as the world’s biggest consumer. Yet the administration says it’s confident it can find alternative sources without any undue additional pain on the U.S. economy.

European nations are far more dependent on Russian oil and are not in any position to quickly replace that supply, which is why they have so far been reluctant to outright ban it. About half of Russian energy exports currently go to NATO nations.

“We’re moving forward, understanding that many of our European allies may not be in a position to join us,” Biden said. “We can take this step when others cannot,” he added, calling the move a “powerful blow”  that strikes at “the main artery of the Russian economy.”

Biden moves to ban all Russian oil imports to U.S.

U.S. President Joe Biden has banned all imports of Russian oil into the U.S. over the invasion of Ukraine, a move that’s expected to drive record gas prices even higher. 1:58

It’s an escalation from previous moves by the administration, including a Biden-led push last week for nations around the world to release 60 million barrels from their strategic petroleum reserves to reduce Putin’s leverage.

While significant, the barrel release represents about the amount that the world consumes in 14 hours, which is why it didn’t have much of an impact, energy analyst Allen Good with Morningstar said.

Which is why Morningstar said he sees very little on the short term horizon to bring prices down. “An Iran deal or demand destruction are the only real options to relieve price pressure. But the latter might take prices higher, meaning a 2008-type spike isn’t off the table,” he said.

He isn’t the only one who thinks the global balance between supply and demand is off kilter in a way that will make oil get even more expensive from here.

“How high can oil prices go? Pick a number. This is a market in disarray” energy strategist Michael Tran with RBC mused in a note to clients Tuesday.

While the U.S. may well be able to find alternatives sources, the same can’t be said of other parts of the world, especially Central and South America

“This region typically feeds itself hand to mouth from U.S. Gulf exports. Disruption to the typical flow would lead to price on price competition for product with Europe, leading to a massive inflationary event for all regions involved,” he said.

Gas prices were historically high even before the ban, with the average price for a gallon of gasoline hitting $4.17 this week, automotive group AAA said. That beats the previous all time high of $4.10 a gallon set back in 2008.

Canadian gasoline prices have spiked too, with prices topping $2 a litre in some cities for the first time ever.