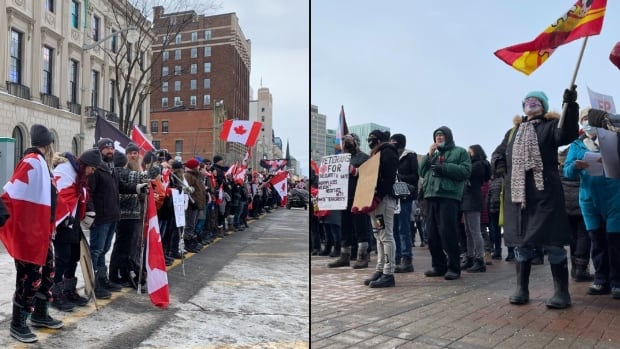 Two very different demonstrations — one calling for an end to COVID-19 mandates, another demanding accountability after the recent occupation — took to the streets of downtown Ottawa Saturday.

In front of Parliament Hill, hundreds of people took part in a “freedom protest,” although the crowd was significantly smaller than the truck convoy demonstrations that drew in thousands of people last month.

“We wanted to bring some unity back, without the noise,” said demonstrator Alex Major, who was part of a human chain that formed along Wellington Street.

“It’s about the unity of Canadian values. And there was a moment of silence for Ukraine as well,” he said.

Many provinces are in the process of lifting COVID-19 mandates, with Ontario having removed its vaccine certificate system along with capacity limits in all indoor settings.

Quebec has been lifting its public health restrictions in stages, with more changes to come March 12th.

Some protesters later relocated to near the Ottawa-Carleton Detention Centre, holding signs that read “Free the Prisoners.” Convoy leaders Tamara Lich and Pat King remain behind bars there after their arrests last month.

Down the street from Parliament Hill, Ottawans opposed to the convoy protest gathered in front of Ottawa City Hall before marching to the Elgin Street headquarters of the Ottawa Police Service.

The marchers demanded police and all levels of government take responsibility for allowing the occupation to last as long as it did.

“We’re sending them a message that there needs to be accountability,” said Hassan Husseini, an organizer with Community Solidarity Ottawa.

It took three weeks before police officers from several forces across the country gained back Wellington Street and parts of downtown Ottawa. At least 170 people were arrested and 53 vehicles were towed.

There were also open displays of hate symbols, and some residents said they were subjected to racial, homophobic and transphobic slurs.

Husseini said residents are “owed an explanation” as to what happened. He said there should be a “no-holds-barred inquiry where nobody is protected and [which] is completely transparent.”

The Prime Minister has said the implementation of the Emergencies Act, done to clear out the protesters, triggers its own inquiry, and has already pledged it will take place within 60 days.

“We are going to be organizing against hate, against white supremacy, against the new fascists and the neo-Nazis. And that’s what we have started to do,” said Husseini, who helped orchestrate a downtown solidarity rally last week.

“So this is another action on … the road of our long-term organizing in the city.”