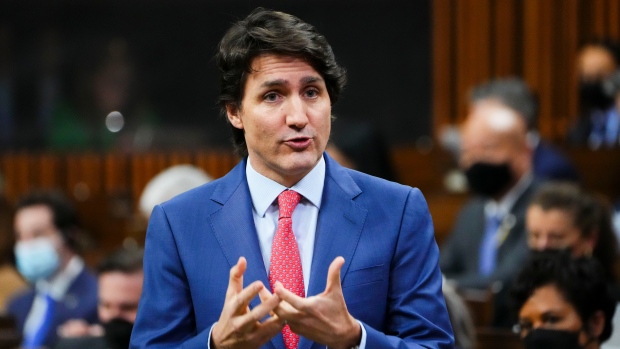 Trudeau said late Thursday that he had spoken with Ukrainian President Volodymyr Zelensky about “the horrific attacks at the Zaporizhzhia nuclear power plant.”

“These unacceptable attacks by Russia must cease immediately,” Trudeau said on Twitter.

U.S. President Joe Biden also spoke with Zelensky late Thursday about the shelling of the plant in the eastern Ukraine city of Enerhodar.

The assault sparked a fire and raised fears that radiation could leak from the damaged power station.

The White House said Biden joined Zelensky in urging Russia to “cease its military activities in the area and allow firefighters and emergency responders to access the site.”

The International Atomic Energy Agency said the fire had not affected essential equipment and that Ukraine’s nuclear regulator reported no change in radiation levels.

Earlier Thursday, a self-described Ukrainian information warrior sent her thanks to Canada from Kyiv after it tightened its economic chokehold on Russian oligarchs and opened its arms to Ukrainians fleeing the war.

The government announced Ukrainians can find a safe haven in Canada using expedited temporary visas for emergency travel, while it ratcheted up economic pressure on Russia by booting it and its ally, Belarus, off its most favoured nation list of trade partners. That now subjects their exports to 35 per cent tariffs, said Deputy Prime Minister Chrystia Freeland.

Until Thursday, the only other country that did not enjoy that preferred trading status with Canada was North Korea, she noted.

From Kyiv, a 33-year-old information technology worker said though she was not aware specifically of what Canada announced on Thursday, it was exactly what was needed to help her country fight off the Russian invasion.

“My message is: Canadian people, please support Ukraine in this war. For Canadian politicians, political people, please provide the strictest regulations towards Russia. Cut them from everything, from economical relations in business to the political things,” Olivia Milton said in an interview from her home in the Ukrainian capital.

Milton said she was part of a Ukrainian “information army” made up of public relations, marketing and information specialists who are flooding social media channels to tell the world about the horrors being inflicted on their country.

Freeland said the brainstorming of her fellow G7 finance ministers and other western allies to find new, creative ways to inflict economic pain on Russia has been driven by the heroic efforts of Ukrainians of all stripes to repel their massive military opponent over the past week.

“That incredibly brave, incredibly spirited resistance has inspired the West,” she said.

Freeland said western democracies might be “losing our mojo. You know, we were getting a little bit cynical about whether democracy really works.” But she said seeing a smaller Ukrainian military force stand up to a much larger enemy “has been transformative.”

Freeland said the new measures announced Thursday will increase the pressure on Russia’s oligarchs, whom she called the “sycophants” and “enablers” in President Vladimir Putin’s inner circle who have lived luxurious lives in the West.

“They have enjoyed a pretty fabulous lifestyle in the West with yachts and mansions and having their kids at the fanciest universities and private schools. And what we’ve done with these measures, much more forcefully than the Russian elite anticipated, is we have said, ‘You know what, you have to pick sides.'”

Freeland announced new sanctions against 10 executives with Gazprom, a major Russian state-owned energy company, and Rosneft, Russia’s leading oil company. Freeland said that brings to 1,000 the total number of people and entities sanctioned, or in the process of being sanctioned, by Canada since Russia’s 2014 annexation of Ukraine’s Crimean Peninsula.

“We’re showing that there are consequences. And it’s very important for Russia to understand that these consequences will become more and more severe,” she said. “Watch this space: there’s a lot more to come.”

Trudeau said Canada and other close partners are calling for Russia’s suspension from Interpol.

“We’re supporting this because we believe that international law enforcement co-operation depends on a collective commitment to the Universal Declaration of Human Rights and mutual respect between Interpol members.”

The government is taking steps to help Ukrainians who have chosen to flee by providing fast-tracked visas for an unlimited number of those who wish to come to Canada to work, and then return home when it is safe, said Immigration Minister Sean Fraser. He said these visas will take just weeks to process, instead of the usual year.

Fraser said a refugee resettlement program would have taken years, and he learned from his conversations with the Ukrainian community that many people will want to return to their home country when the conflict ends.

The application process is expected to open in about 14 days.

Fraser said biometric technology will be used to screen out people in Ukraine who have fought for the Russians after the annexation of Crimea in 2014 and during Russian-backed unrest in the country’s eastern region in the last eight years.

The United Nations Refugee Agency says the refugees who have fled Ukraine to neighbouring countries since Russia launched its attacks last week now number one million.

The agency warned that without an immediate end to the conflict, millions more will be forced to leave their country.

Freeland said Canada will push the International Criminal Court to pursue “architects” of what she repeatedly called a “barbaric” war for war crimes and crimes against humanity. But she made a distinction between them and young Russian soldiers who she said likely didn’t know they were about to invade a foreign country.

“I feel so sorry for them. They’ve really been sent into a meat grinder to support one man’s barbaric effort to undermine democracy,” she said.

“I feel sorry for their families.”

In addition to the economic pressure, Canada plans to send more lethal military aid to Ukraine in the form of 4,500 rocket launchers and 7,500 hand grenades from the Canadian Forces armoury.

Canada has also pledged $1 million for the purchase of high-resolution modern satellite imagery.

Fraser also announced a new reunification program for Ukrainians with family in Canada who wish to come and remain here permanently.

The government has encouraged refugees to continue to apply to come to Canada through traditional immigration streams, and says their requests will be expedited too.

About 6,000 expedited applications from Ukraine have been approved since January.

Earlier Thursday evening, the Prime Minister’s Office said Trudeau spoke with Dutch Prime Minister Mark Rutte about Russia’s invasion of Ukraine. A summary of the conversation said the two leaders “condemned these actions as blatant violations of international law” and they “agreed to meet soon.”

Rutte tweeted about the call on Thursday and said he would speak with Trudeau in London on Monday, where they would both meet with British Prime Minister Boris Johnson.

This report by The Canadian Press was first published March 3, 2022.

— With files from Laura Osman and The Associated Press.