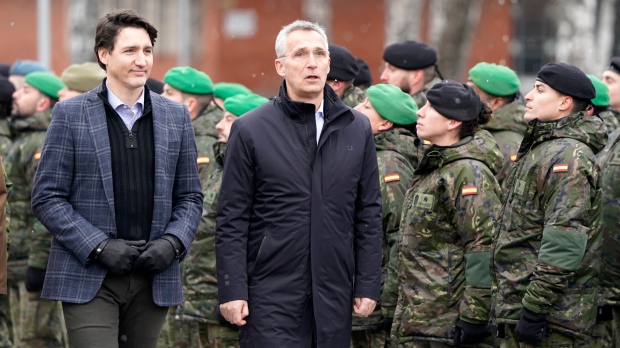 The jagged edges left after the collapse of the Soviet Union have opened old wounds and left Western leaders groping for a way to stanch the flow of blood.

Crimea is part of Ukraine but also home to two of Russia’s most important naval bases. The invasion by Russia’s Vladimir Putin eight years ago was as illegal as it was predictable, as no serious international effort was ever made to reconcile these competing interests. The result of that Russian invasion seemed to have become a fait accompli in the eyes of most Europeans, and that simply whetted the appetite of the Russian regime.

Justin Trudeau was right. The world order that had stopped the largest powers from engaging each for over 75 years has now been fractured by Russia. Once that rubicon was crossed by Putin, his threats about using nuclear weapons, though a sign of his instability, had to be taken seriously.

While Crimea and the Donbas are seen as the flashpoints, Putin’s stated goal is the elimination of Ukraine as a separate country. He denies the existence of Ukraine, period, and all talk of “denazification” or other blood libels are for domestic Russian consumption. Nobody else in the world believes it.

For the West, the real challenge is to come to grips with this new reality. There is a principle in most legal systems that holds that we all have a positive obligation to assist when someone else is in danger. Whether it’s schoolyard bullying, domestic violence or severe self-destructive behaviour we have a duty to help others. To intervene.

The question for the world is: when does that obligation become a duty to intervene, internationally? In the case of Ukraine, at what point are nations morally, and legally, required to go from handwringing and admiration, to action?

The slowly grinding wheels of international justice that eventually ensnared the Radovan Karadžić’s of this world, will one day catch up with Putin’s henchmen. But that will be cold comfort to the families of victims of the atrocities they are being perpetrated right now by Russia in Ukraine.

Targeting civilians is a war crime but there’s no sheriff in town.

Trudeau seems to relish his international role after weeks of needling and aggravation by angry truckers in Ottawa. It’s the part of his job that he’s always enjoyed the most and it had been largely on pause during the pandemic.

There is an agreed yardstick for measuring the contribution of NATO members to our common defence. We are supposed to be spending 2% of our GDP. Canada is one of the worst laggards in the Alliance. In that press conference, it should’ve been easy for Trudeau to say we’ll finally meet our NATO obligations. Trudeau hemmed and hawed instead of providing a clear commitment. Despite the horrors of the Russian aggression on Europe’s doorstep, which Trudeau had travelled to denounce, he hesitated. That too is easy to decode.

Canada talks a good game at these critical times but our failure to step up to the plate with respect to our NATO obligations speaks volumes about our lack of action to back up our brave words.

On the crucial energy front, the Dutch, like their German neighbours, can’t even contemplate an oil and gas boycott of Russia. In the middle of Russia’s brutal assault on Ukraine, they’ve said they could never take such action.

Moscow knew how to decipher that weakness and recently turned the tables on the Europeans. It is now the Russians threatening to cut off oil and gas supplies to Europe. The Russian economy is heading towards a full collapse within months. Accelerating things seems to matter little to Putin at this stage.

Germany points to its decision to delay approval of a pipeline as proof of its toughness against Russia. That gas pipeline, Nord Stream 2, has never been used, it is not in service. They haven’t cut anything off. The German posturing is as empty as the pipeline.

As the military and energy crisis deepens, action from Canada could come in an unexpected form and turn into an opportunity for the Liberals. Whatever countries like Germany do in the short term, it’s clear to anyone paying attention that Russia will never again be considered a reliable supplier of oil and gas.

Trudeau has once again postponed his government’s decision on the mammoth Bay du Nord offshore oil project in Newfoundland and Labrador. It’s a wicked problem.

When he named Steven Guilbeault environment minister, Trudeau finally garnered some respect after years of failure to meet our obligations under the Paris Accord. As Canada’s Environment and sustainable development Commissioner pointed out, Canada had the worst record in the G7.

That decision may become easier with the impending energy supply problems in Europe. There’s no way for Canada to ever meet our international obligations if we massively increase fossil fuel production. There’s no political excuse for our bad performance since 2015, despite all the promises. But now, Trudeau’s been handed a ready-made, and high-sounding, excuse: we have to help our allies!

There is a real and increasingly dangerous energy emergency developing in Europe that has been spawned by the war in Ukraine. More than anything, it could and should be a golden opportunity to use our resources to be creative and innovative and “build back better,” putting all of our effort into building a clean, renewable energy infrastructure for future generations.

Tragically, we’ll probably wind up with “drill baby drill,” and an extraordinary opportunity, born of a crisis, will have been squandered.

Tom Mulcair was the leader of the federal New Democratic Party of Canada between 2012 and 2017.