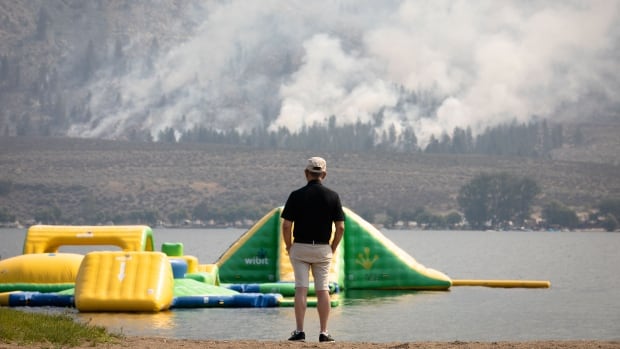 The Intergovernmental Panel on Climate Change (IPCC) released a report on Monday on the  impacts, adaptation and vulnerability humans face with rising temperatures.

It may be difficult to get through all the facts and figures on yet another tome — it’s more than 3,500 pages. But this report, much different than its predecessors, focuses on the human toll of climate change and how we may adapt.

Or, as UN Secretary-General António Guterres called it: “an atlas of human suffering and a damning indictment of failed climate leadership.”

Among all the numbers, the report’s message is clear: climate change is already taking its toll on humanity, at a grave cost. Some of that’s hard put a dollar figure on, but the concrete costs are already mounting.

And it could be much worse, depending on the trajectory we take.

What’s worse is that the report suggests that places that only experience fire every 400 years will experience them as often as once every 50 years.

“We’re kind of used to these events being sort of discrete events: there was a flood last year or there was a forest fire three years ago, kind of thing. Now the risk that’s starting to emerge is that these events start to happen closer together, that they’re more severe when they do occur,” said Robert McLeman, environmental studies professor at Wilfrid Laurier University and coordinating lead author on the IPCC report’s chapter on health, well-being and the changing structure of communities.

“It amplifies the risks to people’s physical well-being, mental health and well-being. And it increases the risk of displacement.”

The report further states that fires, combined with pests and other factors, could result in the loss of $459 billion in forestry by 2080, with the biggest losses in British Columbia, Saskatchewan and the Northwest Territories.

It’s also important to consider the financial cost of people being displaced by more frequent and intense wildfires.

The world is falling behind in adapting to the climate crisis as natural disasters get more frequent and severe, according to the latest report from the Intergovernmental Panel on Climate Change. Extreme weather events in Canada indicate that the consequences of inaction are already here. 2:06

How quickly humans act to reduce emissions changes the forecast of how bad things will get.

Wildfires may not be top of mind for the more than 80 per cent of Canadians who live in a city, but city-dwellers are facing their own challenges.

The report found that North American cities are already facing challenges from a warming planet, including the severity and frequency of “climate-induced hazards” and extreme events, such as severe storms.

These storms are costing Canadians due to infrastructure damage, such as floods in cities like Calgary and Toronto. According to the IPCC, flooding accounts for 40 per cent of weather-related disasters since 1970, the costliest being the 2013 Calgary flood which cost $1.8 billion in insurance losses and an additional $6 billion in uninsured costs. The report did not include the fires and floods from 2021.

“Cities are very complex, so their vulnerabilities are complex,” said Luna Khirfan, an associate professor at the University of Waterloo, who was involved in the IPCC report’s chapter concerning cities. “You have the direct vulnerabilities to climate hazards, to climate-related risks like flooding, urban heat islands. Coastal cities face storm surge, beach erosion. So these physical risks are compounded in cities because you have a concentration of human lives and livelihoods. So to protect the economy, to protect human lives, we need to act and we need to act now.”

Farmers have always faced the challenges of weather, but climate change brings new extremes and unpredictability. The report states that high temperatures along with extreme weather events linked to climate change — such as droughts, floods and heat waves — will “increasingly limit production in agriculture” including aquaculture and fisheries.

Maize production could fall by four per cent in a high-emission scenario or less than one per cent under rapid emissions cuts. And, with increasing warming, pests and diseases are expected to worsen. By 2050, parts of British Columbia, Alberta, Saskatchewan, Manitoba, Ontario, Yukon and the Northwest Territories will experience water scarcity in the growing season.

For those in Nova Scotia, climate change has already reduced kelp by 85 to 99 per cent. Kelp serves as a habitat for fish off the coast of the province.

Ocean acidity will affect fisheries as some shellfish struggle to make their shells. And the report says that, if emissions are high, shellfish production could drop by 51 per cent with the biggest losses in British Columbia and Quebec, and shellfish and lobster by 42 to 54 per cent.

It’s unclear how all these rapid changes will affect prices at the grocery store.

The good news is those losses could be cut in half if emissions are cut rapidly, the IPCC said.

When it comes to food, Indigenous people face some of the biggest challenges.

Due to the changes to delicate ecosystems, which includes our oceans, the study said that Indigenous groups — in particular those on the West Coast — will have “less access to traditionally harvested seafood,” which will have consequences for their health. Even if they try to replace seafood with non-traditional food, they will suffer from nutrient loss.

And because they will rely more on purchasing food, it raises their costs and could contribute to food insecurity along with impacts on their health in regions that are already suffering. Already, food prices are disproportionately high in the North.

“The reality is that most Canadians, regardless of where they live, have felt the impacts of the climate crisis,” said Julia Levin, senior climate and energy program manager at Environmental Defence, a Canadian environmental advocacy organization. “That’s been felt most most by communities in the North, whose homes are literally falling to the to the sea, and where food security is already diminishing.”

Humanity will continue feeling the effects of a changing climate, though by just how much depends on how we move forward, the report said. It’s something they have continued to echo in every report.

Levin said Canadians have the ability to make a difference.

“The decisions we make today will determine that future outcome,” Levin said. “But I think what we really have to remember is that we have all the solutions, we know exactly what we need to do. The only thing missing is that political will. And we, as a population, need to be holding our decision-makers at all levels of government accountable for doing what needs to be done.”