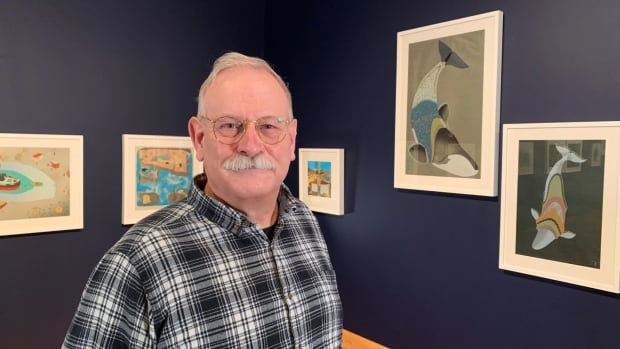 It is one of many largest and most important donations The Rooms has ever acquired: practically 400 prints by dozens of Inuit artists, capturing a singular and important interval in Canadian artwork historical past.

The gathering is being handed over to The Rooms by artist and grasp printmaker William Ritchie. Ritchie is a celebrated visible artist in his personal proper, however these works are drawn from his 30-year profession as a printmaker on the historic Kinngait Studios in Kinngait, Nunavut, previously referred to as Cape Dorset.

There, Ritchie labored with Inuit artists who would develop into main names within the artwork world, together with Annie Pootoogook, Tim Pitsouliak, Pudlo Pudlat and Kenojuak Ashevak. However whereas their prints had been flying off the partitions at Toronto artwork galleries, Ritchie received to make a copy of each print he labored on.

The result’s an enormous trove that captures a time when Inuit artwork was shifting away from conventional representations of northern life, and starting to replicate fashionable social realities and out of doors influences. As studio supervisor and grasp printmaker, Ritchie inspired this new era of Inuit artists to observe their artistic imaginative and prescient.

To listen to Ritchie’s story and look at this unbelievable assortment, watch the video above.

And be part of us Thursday at 7 p.m. NT on the CBC N.L. Facebook page for a stay dialog from The Rooms. We’re diving into the primary exhibit drawn from William Ritchie’s assortment, referred to as Serving to Fingers: 30 Years at Kinngait Studios. The exhibition is curated by Nakasuq Alariaq, an Inuk-Finnish graduate scholar, educator, curator and author from Kinngait. Alariaq will be part of Mireille Eagan, curator of up to date artwork at The Rooms, for a particular take a look at the featured artworks and to reply questions from our viewers.