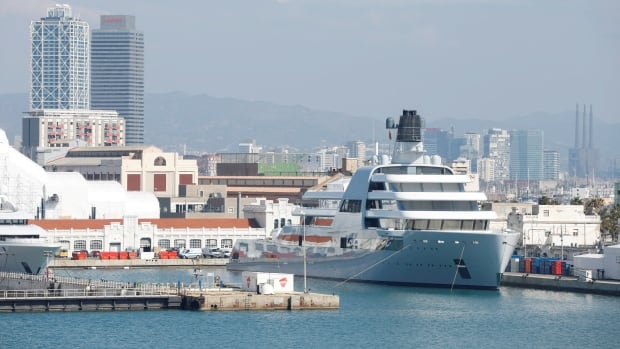 With sanctions levied and financial assets seized, Russian oligarchs have been scrambling to get their super yachts out of Western ports in search of safer harbours.

One yacht, said to belong to Russian President Vladimir Putin himself, abruptly left port in Hamburg, Germany, just weeks before the Russian invasion of Ukraine prompted wide-reaching sanctions. Others were not so quick to leave European ports.

Authorities in La Ciotat, on France’s Mediterranean coast, seized a yacht they say is linked to sanctioned Russian oligarch Igor Sechin, the CEO of state oil company Rosneft. He was Russia’s deputy prime minister from 2008 to 2012.

Industry watchers say oligarchs everywhere are trying to keep their yachts from being taken.

​​”There’s a few yachts that we are watching at the moment in the Atlantic,” said Sam Tucker, head of super yachts at the firm VesselsValue, which tracks and estimates the value of these giant luxury yachts.

“I’m expecting some of them to start doing U-turns in the middle of the ocean,” he told CBC Radio’s Day 6.

Western countries have imposed a punishing package of sanctions and export control restrictions on Russia in response to the invasion of Ukraine. Russia’s biggest banks were hit, as was the country’s central bank. Major state-owned companies and some of the country’s wealthiest individuals have seen overseas assets frozen.

The investment bank JP Morgan Chase believes Russia’s economy will shrink 35 per cent in the second quarter of 2022 and seven per cent for the entire year.

8:25Targeting super yachts owned by Russian oligarchs could hit a nerve in Moscow

White House spokesperson Jen Psaki says the suite of sanctions is meant to make every aspect of life difficult on Putin and the oligarchs who protect him.

“What we’re talking about here is seizing their assets, seizing their yachts and making it harder for them to send their children to go to colleges and universities in the West,” Psaki said in a briefing this week. “These are significant steps that will impact the people who are closely around President Putin.”

The yachts themselves are worth hundreds of millions of dollars, but experts in Russian sanctions say this isn’t just about the dollar value.

“They don’t have much value compared to the total net worth of an oligarch,” said Bill Browder, a long-time advocate for stiff sanctions against Russian oligarchs, in an email to CBC Radio.

But they are “a highly symbolic attack on something coveted by the oligarchs.”

These ultra-luxurious ships became a status symbol for the oligarchs as they amassed fortunes in the 1990s and early 2000s.

“There is a bit of oneupmanship,” Tucker told Day 6. He says the biggest and most expensive ships are cloaked in secrecy. They have extreme privacy and security features, including bulletproof glass, and some require crew to sign non-disclosure agreements.

But Tucker says the biggest security and privacy feature of all is the opaque ownership structure of the yachts. He says precious little information about who actually owns these ships is available.

“[Only] basic information is disclosed — for example, the registered owner — which is often a shell company or a ‘special interest vehicle’ registered in Monaco, Malta, [or the] Cayman Islands,” he said.

Untying those knots is a notorious problem, but one usually confined to taxation issues.

“One thing that I think may come out of this whole situation is the increased call for transparency and transparent ownership,” said Tucker.

Yachts on the move

So far, only four super yachts have been seized, including a 213-foot yacht owned by Alexei Mordashov in Imperia, Italy.

While authorities sift through the byzantine paper trail of ownership, other oligarchs have scrambled their crews to get the yachts to somewhere safe.

“One of the things I’ve been trying to figure out is, where do they go [next]?” asked Alex Finley, a former CIA officer living in Barcelona, in an interview with As It Happens host Gillian Findlay.

This week, Finley tweeted photos tracking a ship said to be owned by Roman Abramovich, the Russian billionaire who owns the Chelsea Football Club.

“A lot of these yachts that we’ve been looking at are heading towards the Maldives or the Seychelles. A few are in Montenegro, but they look like they’re probably going to be on the move,” Finley said in the interview.

Here you can see the sterns of both Aurora and Valerie, and in the other pic, the empty slip where Solaris used to be (which is the size of the empty hole in my heart). 7/ <a href=”https://t.co/Luvj5vyWXp”>pic.twitter.com/Luvj5vyWXp</a>

Neither the Maldives nor the Seychelles signed onto the sanctions, so the ships are probably safe from seizure there. Another major hub is Dubai.

“I think we’re going to see Dubai as a big hotspot for these yachts,” said Tucker. “It has hot weather all year round and … Russians can fly to Dubai without going through the EU airspace.”

Tucker agrees that targeting the yachts is a symbolic move.

“It’s really sending the message that they aren’t untouchable. We’ve closed the skies on both sides of the Atlantic so their private jets can’t operate, and now we’re going after their super yachts,” he said.

“I’d be feeling quite vulnerable if I was an oligarch right now.”