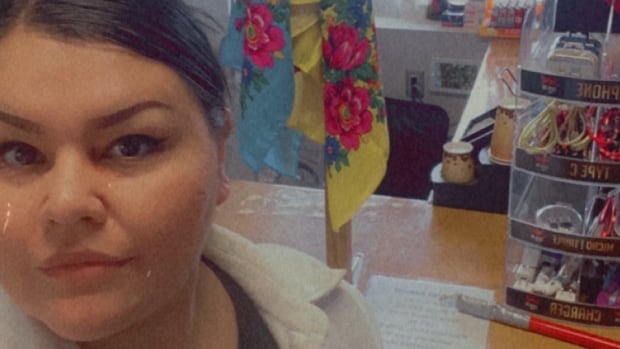 When Olivia Holloway learned Russia had invaded Ukraine, she took it to heart, she says.

So as a sign of support for Ukraine, she displayed some kokum scarves her family carries at The Boy Chief Trading Post, located at the west end of Siksika Nation, about an hour east of Calgary.

“I put the blue and yellow scarves up because of the colour of their flag and the meaning behind the scarves,” Holloway said.

Kokum is Cree for grandmother.

The scarves date back to when the first Ukrainian settlers arrived in Canada in the late 19th century.

Among the goods traded were scarves from Ukrainian women, known as babushkas.

“A lot of people wear them, younger people, older people, we all wear them,” Holloway explained.

People are coming through the store, asking about the scarves and what the significance of them is, she said.

“I explain them even to our people, some of our people don’t even know the history, and they’re like, ‘Wow, I didn’t know that,'” Holloway said.

Candace Linklater is from the Moose Cree First Nation in northern Ontario. She is an educator who focuses on Indigenous resurgence and reconciliation through education, advocacy and feminism.

Ukrainian settlers started arriving in the 1800s, and Indigenous people helped them survive the harsh living conditions by teaching them traditional practices, she says.

She adds that connection between the two cultures is still felt even today.

“I know there are many across Turtle Island that are wearing these scarves in solidarity, because we understand what it is like to be bullied around,” Linklater said.

At the Boy Chief Trading Post, Holloway says Ukraine is in her thoughts and prayers.

“I hope a lot of people, Indigenous or any kind of people, take the time to learn what the scarf actually means and what it represents.”