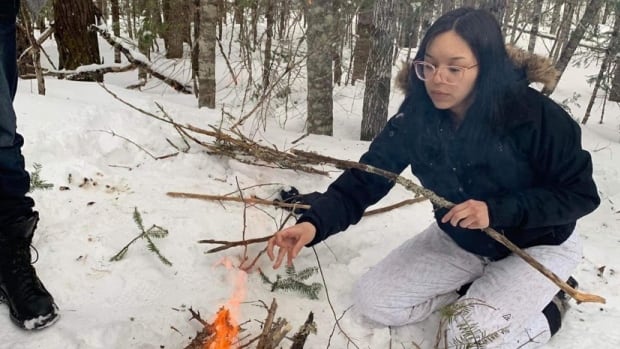 Eight Mi’kmaq youth from Elsipogtog First Nation, about 91 km north of Moncton, N.B., snowshoed into the deep woods earlier this week as part of a two-day program to teach them winter survival skills.

Kayleigh Augustine, 17, was one of the participants who spent the days learning how to build and set snares, track rabbits, build shelter and start a fire in the deep woods on the reserve, among other skills.

She said she was glad to see this type of programming in her community.

“It feels amazing because when I was younger, I wasn’t offered these opportunities,” she said.

The 10- to 17-year-olds taking part learned useful survival skills such as how to hydrate using snow that has accumulated on trees rather than on the ground because it’s cleaner and how to safely start a new fire from an existing one and provide heat for shelter.

The most challenging part, Kayleigh said, was building the temporary shelters, or lean-tos. She said it was tough but really fun, and it helped to share the experience with a great group of fellow kids and mentors from the community.

“I paid such good attention. I helped the other students and staff with their snares,” said Kayleigh.

Respecting the animals you kill

The group never did end up finding any rabbits, Kayleigh said, and were told by the program leaders that was likely because the rabbits could sense an impending storm and stayed in their burrows.

Stephanie Simon is an outreach worker with the land-based program at Oetigoapeniag Elnoei Family Services that hosted the survival-skills course. She said watching the youth out on the land was rewarding.

“It was a beautiful experience just watching them because they were all involved,” said Simon.

She was happy to see the young participants take a break from screens and learn to enjoy the smell of the woods and the sounds of nature.

Simon said a lot of the youth enjoyed snowshoeing and were attentive and eager to learn.

Oetigoapeniag Elnoei’s survival courses have become an annual event for the past three years and in the summer, organizers have more land-based education planned, including lessons on harvesting sweetgrass.

“It’s important that they learn this stuff, all the land based activities, so in the long run, they can show their kids someday,” said Simon.