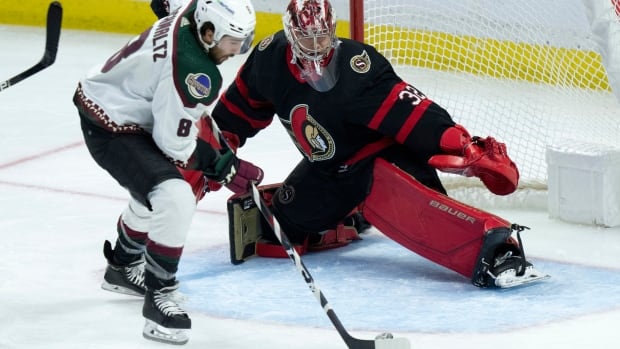 Nick Schmaltz scored the game-winner to extend his point streak Monday, and the Arizona Coyotes beat the Ottawa Senators 5-3.

Lawson Crouse scored three goals, one at even strength, one on the power play and shorthanded. Barrett Hayton had an empty-net goal.

Scott Wedgewood made 40 saves to pick up his tenth win of the season.

With the win the Coyotes take the season series, having beaten Ottawa 8-5 nine days earlier in Arizona.

Connor Brown and Josh Norris, with a pair of goals, scored for the Senators (21-33-5). Filip Gustavsson, making his first NHL start since Feb. 20, stopped 12 shots.

Ottawa trailed 3-2 to start the third, but tied things up at the seven-minute mark when Connor Brown buried a Brady Tkachuk rebound, but 16 seconds later the Coyotes regained the lead as Schmaltz took a pass in front and beat a sprawled Gustavsson.

Despite being outshot 17-3 in the second period, the Coyotes managed to finish the period leading 3-2.

Crouse completed the hat trick when he beat Gustavsson shorthanded late in the period after taking advantage of a Senators giveaway and winning a foot race for a loose puck to break in alone.

An eventful first period saw the teams tied 2-2 after the opening 20 minutes.

In the opening minutes, Tkachuk went hard to the net and Norris was there to jam home the rebound.

Crouse then scored back-to-back goals for the Coyotes. The first was a great shot high glove side and the second was on the power play as he tipped a Shayne Gostisbehere point shot.

Norris tied the game on the power play with his second of the night.

WATCH l What Canadian teams might do ahead of NHL trade deadline:

What Canadian NHL teams might do ahead of the trade deadline

March 21st is fast approaching, and Rob Pizzo looks at what changes we could see from the teams north of the border. 6:02