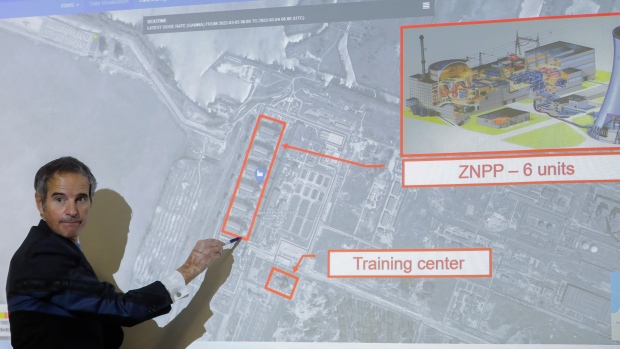 The chances of a nuclear attack by Russia are currently quite low, but there is ongoing worry around the possibility of a nuclear accident, defence policy experts and nuclear scientists say.

The fire at Zaporizhzhia, Europe’s largest nuclear power plant, in the early hours of Friday heightened concerns around the security and safety of Ukraine’s nuclear facilities. The International Atomic Energy Agency (IAEA) called for an end to armed conflict that put the plants at “severe risk” and jeopardized the safety of the public and environment.

At the same time, Russian President Vladimir Putin’s order less than a week ago to put Russian nuclear forces on high alert also fuelled debate over its significance. Concerns over escalating tensions were such that a planned, routine test launch of U.S. intercontinental missiles, the Minuteman III, was postponed on Thursday.

CTVNews.ca interviewed nuclear scientists, policy and military experts who outlined their views on some of the potential nuclear risks and what that could mean for Canada and North America.

While the risk of a catastrophic accident at a nuclear facility is low, most experts say it is a more likely scenario than a deliberate bombing.

“I think that an attack with a nuclear weapon is very unlikely right now,” Cheryl Rofer, a retired nuclear scientist who worked at the Los Alamos National Laboratory for more than 36 years, said in an email Friday.

“A nuclear accident is more likely, especially when there is warfare around nuclear plants.”

Scenarios for a plant like Zaporizhzhia include a fire in a spent fuel pool or a core failure like what happened at Fukushima, she says.

The problem, scientists say, is that reactors continue to produce heat even when they are turned off because of the radioactive material that’s inherent in the reactor. Cooling water is required to keep the reactors from overheating, but if that system fails, then it is no longer able to keep the reactor core from melting down.

Fuel that has been taken out of the reactor, known as “spent fuel,” is stored in pools of water, Cofler explained.

“It is both radioactively and thermally hot when it comes out of the reactor. If the flow of water around it is stopped, or the pool is breached, the fuel heats up to where it could catch fire. This would release radioactive material.”

The Fukushima nuclear disaster occurred in 2011 following an earthquake and tsunami, and is the worst nuclear accident since Chornobyl in 1986. The reactors automatically shut down when the earthquake hit, but power grid issues also caused the electricity to fail. This in turn automatically kick-started the emergency diesel generators. But the tsunami that resulted from the earthquake was so high that it breached the nuclear facility’s sea wall. The generators failed because they were flooded with sea water. The domino effect meant there was no power to keep the cooling pumps in operation, which led to several nuclear meltdowns and hydrogen explosions, along with radioactive contamination.

Even though five of the six reactors at the Ukraine plant that was attacked are now shut down, the fuel remains hot and radioactive.

“Cooling the reactor core is essential to prevent the reactor from actually being damaged,” says Pekka Sinervo, a professor of physics with the University of Toronto, in a phone interview.

Sinervo noted that an accident like Chornobyl is unlikely, however, because it uses a completely different technology.

To get a sense of Zaporizhzhia’s size, Sinervo says it generates twice as much power as the Darlington Nuclear Generating Station, Canada’s second-largest nuclear plant.

The worry, however low, is if a missile attack were to somehow knock out the cooling system.

“If you use dumb munitions that do not have a GPS guided system on it or whatnot, the potential for catastrophic disaster is there,” CTV News military analyst David Fraser told CTV News Channel on Friday.

The containment buildings for each reactor – the large concrete structure commonly associated with nuclear facilities – are built to contain any radioactivity that’s released from the reactor itself. Damage to the buildings could result in significant risk of radiation being released.

Despite these concerns, experts note that nuclear plants are built to withstand very strong impacts, including earthquakes and missile strikes.

“Nuclear reactors, power stations are incredibly resilient to attacks or to anything striking. Even the possibility that there’s an airliner that falls out of the sky entirely accidentally – they’re designed to withstand that sort of effect,” Thomas Hughes, a Post-Doctoral Fellow at the Centre for International and Defence Policy at Queen’s University, said in an interview on Friday.

“The fact that Russia was comfortable with firing missiles towards a nuclear reactor, obviously, does increase the risk of a disaster, even if that risk remains very low.”

Strategically, Russia’s efforts to take control of Zoprozhzhia was not unexpected, according to Fraser, a retired Major-General with the Canadian Forces. Destroying the plant itself would go against Russia’s military strategy.

“This is exactly what any invader wants to do is to take over all communications, all the utilities to control it, so he can control the population,” said Fraser.

“They’re trying to take over any or all of Ukraine. So he’s going to be as concerned as everyone else, and nothing happens to this nuclear plant. And we should expect that all nuclear plants inside of Ukraine will be an objective for the Russian army.”

“I think we need to be very careful about hyperbole around the likelihood of use of nuclear weapons. I think the chances of their use is actually extremely low, thankfully,” said Hughes.

“The fact is, these missiles and these bombs exist. They could be deployed, their deployment would be extremely harmful. So we need to be aware of it and we need to understand the consequences of it. But I think we need to be careful of extrapolating that into a perception that it’s likely.”

Even a “small” nuclear attack would be devastating, experts say, with the blast radius stretching for kilometres.

However, Maj. Gen Robert Latiff, who serves on the Science and Security Board of The Bulletin of the Atomic Scientists, the organization behind the Doomsday Clock, believes that a chance of a nuclear weapon attack is greater than a power plant accident, even though he too says the overall risk is low.

“If they take them out of wherever they’re stored, the danger of something happening rises pretty dramatically,” said Latiff, who retired from the U.S. Air Force, in a phone interview.

“If one went off over there, it wouldn’t matter what size it was. Just the whole idea of breaking through that threshold is a monumental event. I mean, it would be more monumental, I think that anybody can possibly even imagine, because once those floodgates open, no closing.”

Should the unimaginable occur in Europe, experts say Canadians should be safe from any radiation impact. It took about two-and-a-half years for radioactive contamination from Fukushima to reach close to California, but levels were so minuscule that they were not considered a threat.

“I think the immediate risk of any radioactive fallout or exposure is very small for Canadians. I would worry more about crossing the street and getting hit by a car,” says Sinervo.

But there will most likely be policy, secondary or tertiary impacts on countries around the world, including Canada. Following Fukushima, many governments abandoned or moved away from nuclear energy, according to Sinervo. Chornobyl, meanwhile, impacted food and grain supplies, Latiff said.

“But a nuke going off anywhere in the world would have a really large impact obviously, policy-wise….there would be a lot of fear and trepidation in North America. We would begin thinking about coming to the aid of our allies,” said Latiff.

Hughes says conversations around a North American anti-ballistic missile system – one that would shoot down a missile coming towards North America – could also shift.

“One of the big conversations … [is] whether Canada would be involved with the United States anti ballistic missile program. And the answer to that has historically been no, we don’t want to be a part of that. That’s just the United States,” he said, noting that the shortest missile path to the U.S. from Russia would be over the Arctic and Canada.

“I think that conversation is going to be very much more pointed in the aftermath of this conflict.”