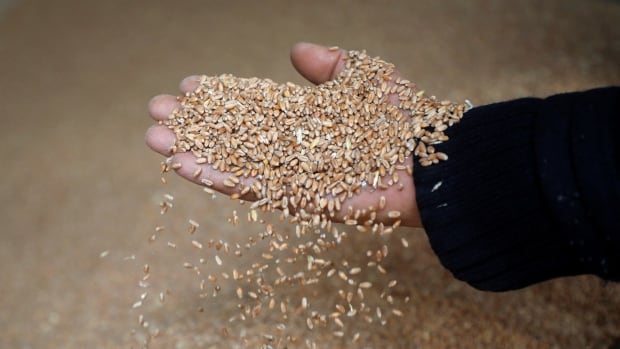 The Russian invasion of Ukraine is driving up global wheat prices as the conflict curbs exports of the crop, triggering shortages and setting the stage for worsening food inflation in Canada.

Canadian wheat producers have warned that the situation will make it extremely difficult for Ukrainian farmers to get their seeds in the ground.

The impending shortages could send retail prices of food like bread and pasta ballooning in Canada, while jeopardizing food security in other countries.

Chicago benchmark wheat prices have soared more than 50 per cent since the invasion began. The price of a bushel of wheat hit $12.94 US on Monday, up from about $7.58 US at the start of the year.

Prices of the food staple are expected to continue climbing as the Russian attack risks disrupting the farming season in Ukraine, one of the largest wheat exporters in the world.

“We rely heavily on Ukraine and Russia to feed the rest of the world, particularly when it comes to wheat,” said Sylvain Charlebois, professor of food distribution and policy at Halifax’s Dalhousie University.

Those increases would be stacked on top of staggering inflation at the grocery store so far this year amid rising labour and input costs.

Statistics Canada reported last month that bakery product prices rose 7.4 per cent in January compared with a year ago, for example, outpacing the food inflation rate of 6.5 per cent.

WATCH | Why the price of wheat is surging:

With Russia and Ukraine being major exporters of wheat, people can expect the price of wheat to go up and for buyers to shift their purchasing toward other markets, says the University of Saskatchewan’s agricultural economics professor Richard Gray. (Photo credit: Orlin Wagner/The Associated Press) 1:27

The agency said higher bakery costs were due to unfavourable growing conditions, in addition to supply chain disruptions. Experts say there’s also been consolidation in the bakery market in Canada in recent months, reducing competition.

Still, it could be months before escalating wheat prices hit the bread aisle.

“Wheat futures have gone up significantly but it will take time to ripple through the supply chain and impact consumers,” said Stuart Smyth, associate professor in the Department of Agricultural and Resource Economics with the University of Saskatchewan in Saskatoon.

“The way a futures price works is it looks at a delivery price down the road,” he said. “It’s indicating to the market where it sees the potential actual price going, but it’s still fluid.”

The rise in wheat prices appears to be a potential boon for Canadian farmers. Yet agriculture observers say a drought across the Prairies last year curtailed crop yields, leaving farmers with little to sell amid surging prices.

“That’s a big jump in a short period,” Goff said. “The trouble is there isn’t much grain to sell this late in the season, especially after the growing season we had. Most people have already sold the bulk of their product, so they can’t take advantage of that.”

For the coming season, the conflict in eastern Europe is also threatening the supply of fertilizer, a key input for wheat crops.

“Ukraine is a major place for fertilizer production, particularly potash,” said Simon Somogyi, University of Guelph professor and Arrell Chair in the Business of Food.

“Fertilizer prices are already very high, so depending on how long this conflict lasts we could see prices increase even more.”

“Feed prices will be going up and that can impact the price of meat and particularly the price of dairy,” he said, noting that dairy costs are already up more than eight per cent this year.

Still, while Canada faces the threat of sustained inflation, other countries could face food security issues.

Prime Minister Justin Trudeau said Monday the “ripple effects”‘ of Russia’s invasion in Ukraine include major disruptions to the United Nations Food program, which helps prevent hunger around the world.