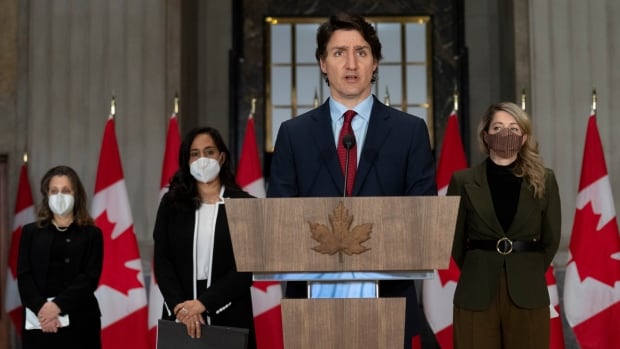 The move is a response to Canada’s aggressive stance toward Russia following that country’s unprovoked invasion of Ukraine.

Along with other Western powers, Canada has levied sanctions on Russian President Vladimir Putin, his close political allies, senior government leaders and the billionaire oligarchs who control Russian industry and other entities abroad.

Canada and allies like the U.K. also have led the charge to essentially disconnect Russian financial institutions from the global economy while restricting Russia’s exports and imposing steep tariffs on its imports.

The effects have been devastating for the Russian economy but Putin’s troops have only pushed further into Ukraine since the onset of sanctions and tariffs, shelling major cities and killing thousands.

In an address to Canada’s Parliament Tuesday, Ukrainian President Volodymyr Zelensky thanked Trudeau and Canada for its contributions to this point — Canada has sent lethal aid, including ammunition. He also urged Canadian leaders to contribute to a no-fly zone to shut down Ukrainian airspace to Russian warplanes.

This isn’t the first time Russia has banned top Canadian officials. Deputy Prime Minister Chrystia Freeland, a former financial journalist who lived and worked in Moscow for years, was secretly added to the black list in 2014 after Canada and other Western countries imposed sanctions on some Russian entities following Putin’s annexation of Crimea from Ukraine.

A Russian foreign ministry spokesperson confirmed in 2017 that Freeland and a dozen other Canadian officials would be banned from Russia until Canada lifted similar restrictions on Russian officials.

After Moscow imposed sanctions on her, Freeland, a frequent Putin critic, posted on social media that she considered it “an honour to be on Putin’s sanction list.”