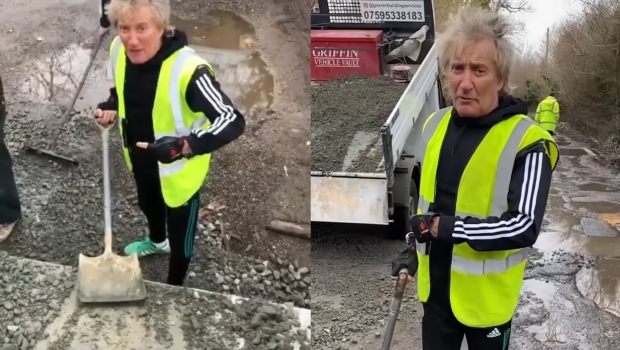 They lurk under puddles and hide where asphalt once was. No matter their size, potholes are not only a pain, but can be a serious safety hazard.

Sir Roderick David Stewart, better known to his fans as Rod Stewart, is taking the matter into his own hands. Tired of dealing with these asphalt craters, the U.K. rocker has swapped a mic for a shovel in a crusade to conquer the vexing potholes near his posh Essex estate.

The 77-year-old, spike-haired singer posted videos on Instagram of himself dressed in a yellow safety vest, filling in several potholes on his street with a shovel

“I’m repairing the street where I live, because no one can be bothered to do it,” Stewart said in one of the videos.

In the second video, Stewart explains that the roads “have been like this for ages” and that the deep potholes were becoming a difficult obstacle for his fancy, low-to-the-ground Ferrari.

“The other day, there was an ambulance with a burst tire. My Ferrari can’t go through here at all. So, me and the boys thought we’d come and do it ourselves,” he said.

“This is the state of the roads where I live.”

For his efforts, the vocalist is getting mixed reviews for his pothole prowess. Some on social media are applauding his effort while others doubt his street patches will stick.

In Canada, March is one of the busiest months for repairs to city streets. The CAA estimates that damage from poor-quality, pothole-laden roads cost Canadian drivers an average of a $126 per year in extra costs.

As for Stewart’s rough road, local officials have now inspected the area and plan to patch things by April.