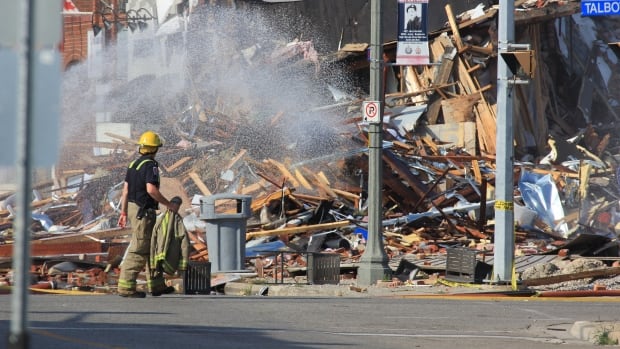 Wheatley residents forced out of their homes due to an explosion last summer will be able to access assistance funding until the end of the year.

In a news release Friday, the municipality of Chatham-Kent said the Ministry of Municipal Affairs and Housing is extending funding until Dec. 31, 2022, to “provide flexibility in the event the evacuation continues longer than expected or some residents are delayed in being able to return home.”

Dozens of residents have been displaced from their homes since Aug. 26, 2021, when an explosion suspected to be the result of a gas leak in collapsed two buildings and injured 20 people in downtown Wheatley.

The municipality and province have been working to resolve the issue, but the surrounding area has been evacuated for the last several months.

Prior to this announcement, the funding was set to expire this month.

The deadline to apply for funding was Jan. 31, 2022, and Chatham-Kent’s general manager of community human services April Rietdyk said that deadline won’t be extended.

But she said they’ve had more than 60 residents apply to the funding program and she believes they have everyone.

If someone missed the deadline, Rietdyk said they can call 311 and work with a Wheatley case manager.

“The uncertainty of accommodations has understandably been a cause of great anxiety for residents,” Rietdyk said in a news release.

“This program will provide some stability in terms of residents’ ability to have accommodation costs covered.”

The Wheatley Residents Assistance Program provides up to $4,000 a month for additional rental housing costs while people are unable to live at their home.

In January, some residents told CBC News that they were experiencing issues with the funding program in place.

Deductions possible based on insurance support

If the evacuation order is lifted before Dec. 31, 2022, the province said residents can continue to receive financial assistance if they are not able to live in their home.

The province added that if the home is damaged and not livable, people can access coverage for additional living expenses under their insurance policy while repairs are underway.

Those who do not have insurance coverage and cannot return to live in their homes after the evacuation order is lifted due to damage can continue to receive funding until the end of the year. Any insurance payments received for living expenses will be deducted from the provincial funding payments.

Insurance payments for repair or replacement of property will not be deducted from the provincial assistance, the province said.

The province is contacting those who are participating in the project and the municipality said it urges residents to work with case workers who are helping them with their claims.

The money residents receive from this assistance program do not need to be reported on the 2021 income tax return, according to the province.

It said that payments from provincial disaster financial assistance programs are not taxable so residents don’t need to report the money they’ve received.