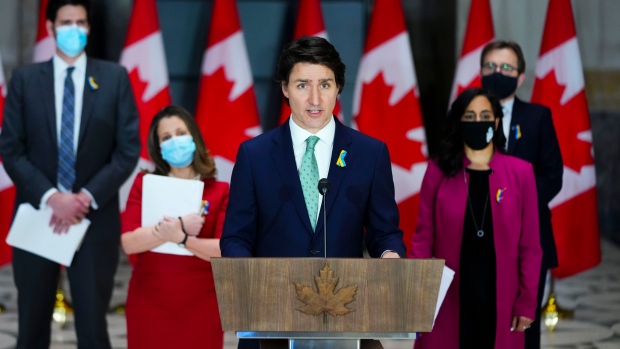 Nanos Research findings show the war in Ukraine has changed the channel for the Liberals, acting as a “reset” in the minds of Canadians following the COVID-19 pandemic and the so-called Freedom Convoy.

On the latest episode of Trend Line, Nanos Research’s Nik Nanos said the federal Liberals’ response to the war in Ukraine, including having Ukrainian President Volodymyr Zelensky directly address Parliament, has boosted the party in the latest ballot numbers.

“When we were talking about the Freedom Convoy and during that period, there was a time when, although Canadians supported the actions of Justin Trudeau, his brand took a bit of a hit,” Nanos said. “This has been a bit of a reset. The war in the Ukraine has changed the channel.”

While it used to be a numerical tie, the latest numbers from Nanos show the Liberals polling at 32 per cent, the Conservatives at 29 per cent, the New Democrats with 22 per cent, Bloc Quebecois at 6.4 per cent, People’s Party at five, and the Green Party coming in just under that at 4.9 per cent.

The rise remains within the margin of error of 3.1 percentage points, 19 times out of 20, according to Nanos.

“The Liberals are starting to show some positive movement,” Nanos said.

The bump is worth taking notice of, Nanos says, and may prove favourable for the party looking ahead.

“It speaks to Justin Trudeau having a platform looking very prime ministerial, putting… the Freedom Convoy behind him and controversies related to the pandemic and all that other stuff, and him looking like a world leader alongside Canada’s allies in trying to support the Ukraine,” Nanos said.

Generally speaking, Nanos said, the government in power usually experiences a bump in polling when the public sees the party taking initiative on major issues.

When looking at the latest ballot numbers, Nanos said it is also important to note that the NDP have seen a bump in polling.

Nanos said it is likely these votes are coming from those who are unhappy with the Liberals or Conservatives. He added that they also may be from those who politically align with the trailing parties, but recognize their vote may be more impactful if thrown behind the NDP.

“I think that the New Democrats have to be watched as a bit of a parking space for voters that might be disaffected with the with the front-line parties,” he said. 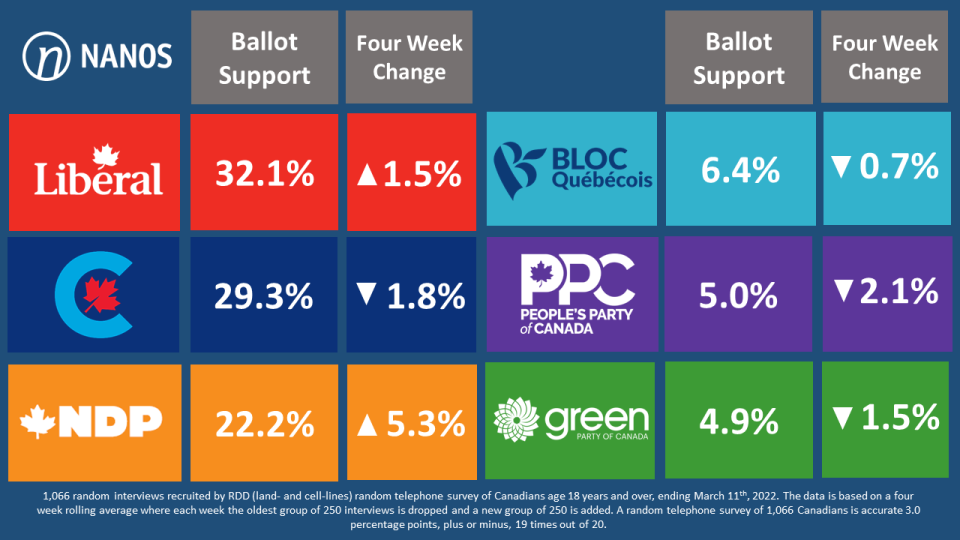 Listen to the full episode of Trend Line with CTVNews.ca’s Michael Stittle and Nanos Research’s Nik Nanos wherever you get your podcasts or by clicking on the video at the top of this article.