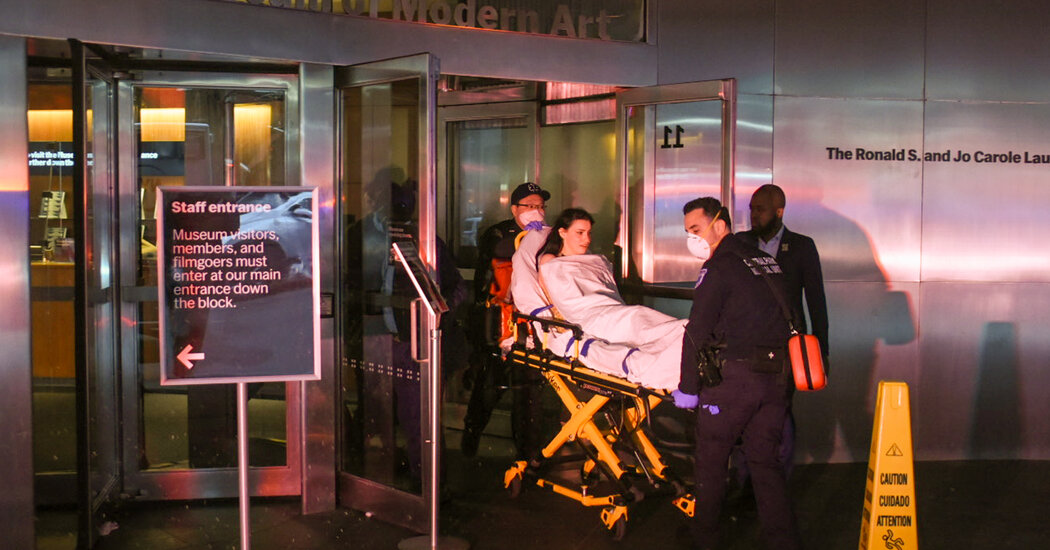 A man who was denied entry to the Museum of Modern Art because his membership had been revoked jumped over the reception desk and stabbed two employees on Saturday afternoon, the police said.

The attack was captured by surveillance video from the museum on West 53rd Street that police released on Sunday along with photos of the suspect, Gary Cabana, 60, who was still being sought. The victims, a 24-year-old woman stabbed in the back and neck and a 24-year-old man stabbed in the left collar bone, were listed in stable condition at Bellevue Hospital, the police said.

The video shows the man barrel through a revolving door and climb across the wooden counter with a knife in his hand, cornering three people behind the desk. After stumbling into a wall, he begins jabbing and swinging the knife while the employees cower under the desk.

Mr. Cabana’s last-known address was a supportive housing residence in Midtown operated by a nonprofit, Breaking Ground, offering shelter for the homeless, the mentally ill and those diagnosed with H.I.V./AIDS, the police said, and he had no prior arrests.

Mr. Cabana remained at large on Sunday, but appeared to post his version of what occurred on social media. The Police Department said it was aware of the posts and was investigating them.

In the posts on Facebook and Twitter, a user writing as Mr. Cabana said that he had bipolar disorder and was “triggered” by a woman who tried to silence him when he laughed during a film.

“Bipolar is a tough road to hoe,” the user wrote. “Dr. Jekyll to Mr. Hyde. THEN U get framed ind evicted from MoMA (not just the movies, ALL THE ART too) by a bitter old woman who shushes U when U LAUGH during a comedy.”

The person posting as Mr. Cabana accused the museum of “a frame job” and said that he had never caused a disruption or been escorted from the museum by security. He said he was blindsided when he received “the letter,” an apparent reference to a letter museum officials sent rescinding his membership.

During a news conference after the incident, police officials said the letter revoking the attacker’s membership had gone out on Friday, but he appeared at the museum on Saturday, seeking to watch a film.

John Miller, the deputy commissioner for the Police Department’s Intelligence and Counterterrorism Bureaus, said the membership had “expired as a result of two incidents involving disorderly conduct here at the museum on two separate dates in recent days.”

When the attacker was denied entry, he became “upset,” and then “proceeded to attack and stab two employees of the museum multiple times,” Mr. Miller said.

He added that the assailant was recorded on video leaving the museum after the attack. He was described as a white man wearing a colorful patterned shirt under a black jacket and a blue surgical mask.

Mr. Miller said that he was “known to the department” because of two earlier incidents in the same area, and had been a regular at MoMA. But he did not have “an extensive record or any arrest records that we are aware of,” Mr. Miller said.

The museum was closed on Sunday. A press representative said it would reopen on Tuesday.

On Sunday afternoon, police pulled up to the building where Mr. Cabana lives but would not comment.

A fellow resident said Mr. Cabana spent a great deal of time in the computer lab in the basement of the building. “He goes down there and chats on the computer,” said Will Fredo, 65.

The attack occurred shortly before a 4:30 showing of the 1938 film, “Bringing Up Baby.” Alessandro Pugliese, 24, who works in communications, said he had arrived at MoMA for the movie when three attendants at the desk near the museum’s film entrance started screaming.

After turning around, he said he witnessed the attacker stab one person in the back and another in the neck. The security guard near the entrance proceeded to pick up what appeared to be a large binder and throw it at the attacker to distract him.

The attacker was still holding his knife when he asked where the security guard’s gun was. Then he ran outside the museum.

“I was absolutely shocked and just sort of froze,” Mr. Pugliese said.

Many visitors said shouts about gunshots stoked panic. The police said there was no indication that shots had been fired.

Julia Garcia Valles, 24, a tourist from Spain, was waiting in line on West 53rd Street to enter MoMA when people shouting, “Shooting!” began to rush out the doors in a panic. Some fell to the floor in the confusion, she said.

“We were really scared,” she added.

Fabien Levy, a spokesman for Mayor Eric Adams, said the mayor had been briefed on the attack, which appeared to be “an isolated, criminal incident.”

Alyssa Katz, deputy editor for the local news site The City, was on her way to meet up with friends at the museum when she saw people running out. Ms. Katz, 53, said she spoke to two frightened French tourists who said they had seen someone stabbed in the underarm area.

Her friend Mike Rubin, 55, a writer who contributes to The New York Times and other publications, was waiting for Ms. Katz in the lobby when a security guard told his group to leave the building immediately. “It was like a game of telephone,” among people who had to rush out, he said. “No one knew what was happening.”

Christian Desrosiers, 34, an entrepreneur, said he was getting his ticket scanned when the commotion began.

He added that he was one of the first people to run out, after he saw three women in front of him bolt for the exit.

“They turned around on a dime and started sprinting out, so I figured that I would join them,” he said.

Wendy Keffer, 42, was visiting the city from Austin, Texas, with her husband and two children. She was walking in for a 4 p.m. slot when they were told to evacuate.

“We were entering the museum and as we were about to walk inside we saw hundreds of people running out and everybody was yelling shooter, shooter,” she said. “It was very scary.”

Jo Walker, 24, a graduate student at Yale University who uses the pronouns they and them, was in a second-floor cafe when the incident occurred. They left through an emergency exit because the escalator was so crowded.

“We had no idea what was going on,” they said.