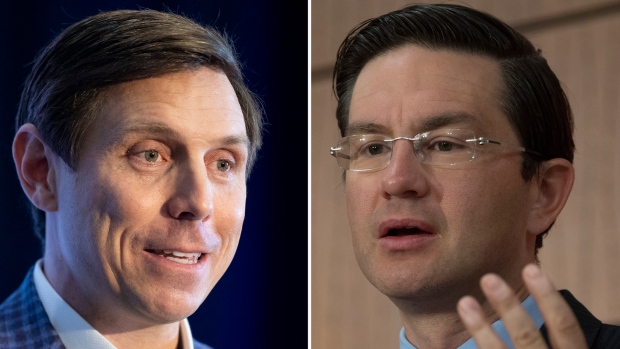 OTTAWA —
Brampton Mayor Patrick Brown and high-profile Conservative Pierre Poilievre spent Monday battling over a seven-year-old election promise to prohibit face coverings during citizenship ceremonies — a sign of what could be the makings of a tense rivalry between candidates in the Tory leadership race.

Brown, who launched his bid on Sunday, blasted longtimeOttawa-area MP Poilievre over his actions back in 2015 when the party promised to create a “barbaric cultural practices” tip line and require people’s faces to be visible during citizenship oaths.

The attack came as Poilievre spent the past few days meeting with cultural community leaders in the Greater Toronto Area and promising to cut red tape for immigrants wanting to access the necessary licences they need to work in regulated industries.Among those he met with were members of the Armenian, Muslim and Pakistani communities as well some of the party’s candidates from the area.

Regardless of who is chosen as leader Sept. 10, Conservatives know they must make inroads with immigrants and racialized Canadians if theyhope to pick up seats in the region as well as other major cities and suburbs, considered key to defeating three-term Liberal Prime Minister Justin Trudeau.

Poilievre pledged Monday to revive similar programs that were in place under the last Conservative leader who did well in communities of visible minorities: former prime minister Stephen Harper, at least prior to 2015.

He promised toincentivize provinces to require occupational licensing bodies to decide on an immigrant’s application within 60 days of receiving their paperwork, rather than forcing them to wait for months.

As well, Poilievre pitched offering small loans to immigrants who might need to take extra courses to gain a professional or trade licence to work in their respective field.

As Poilievre made these pledges, Brown, who is positioning himself as the candidate who stands for religious freedoms, released a statement saying the MP lacks credibility on any policy that impacts minority communities given his role in the Conservatives’ 2015 election campaign.

It was during that race when the party, then led by Harper, promised to create a tip line for so-called “barbaric cultural practices.” Conservatives at the time said it was meant to report things like forced marriage.

During that election, Poilievre was running for re-election as a candidate. He was also a member of Harper’s government when it introduced a bill banning people from wearing face coverings during citizenship ceremonies. That was ultimately struck down in court. The promise was also included in the party’s election campaign, when Harper also mused about possibly extending it to federal public servants.

Brown said Monday that Poilievre has never spoken out against these measures. The MP also has Jenni Byrne on his team, who was the party’s national campaign manager in 2015.

“This is the same campaign which platformed those two abhorrent policies, and lost the Conservatives the 2015 general election,” Brown’s statement read.

“Even if he attempts to distance himself from his silence today, it would be a hollow gesture in an insincere bid to gain votes.”

Poilievre responded Monday by calling Brown a “liar,” accusing him of mischaracterizing what Harper was doing.

“There was no niqab ban,” he said in a statement released on social media.

“I would never support that, nor did Mr. Harper. What Mr. Harper proposed was that a person’s face be visible while giving oaths at citizenship ceremonies.”

Poilievre, whose statement didn’t address the past proposal of a “barbaric cultural practices” tip line, added he would continue to support immigration and equality.

In response, National Council of Canadians CEO Mustafa Farooq tweeted that “leadership requires accountability” and pointed out some of Poilievre’s fellow MPs have apologized for what happened in 2015.

Among those is Edmonton MP Tim Uppal, a co-chair on Poilievre’s campaign, who has apologized for his role as a minister in promoting the ban on niqabs during citizenship ceremonies.Before the leadership race, Uppal said the party was still dealing with the fallout from racialized communities because of the 2015 campaign.

A post-mortem from the Conservatives’ 2021 election loss submitted in January came to a similar finding, according to three sources who spoke to The Canadian Press on the condition of anonymity.

Melissa Lantsman, a newly elected Ontario MP who is also supporting Poilievre in the race, shared on social media last fall that while she was stood in favour of banning the niqab during citizenship ceremonies in 2015, her “view has since evolved.”

Michael Diamond, a campaign strategist who, among other campaigns, worked on Peter MacKay’s 2020 Conservative leadership bid, said Brown’s attack over the issue and targeting of Byrne is a “proxy” attack on Harper, who is highly respected among the membership.

“It seems like folly to me to attack the last campaign of the man who remains the most popular figure in this party.”

He added it’s still early days in the race and cautioned that the debates playing out between the campaigns and on social media were occurring in an “echo chamber.”

This report by The Canadian Press was first published March 14, 2022.