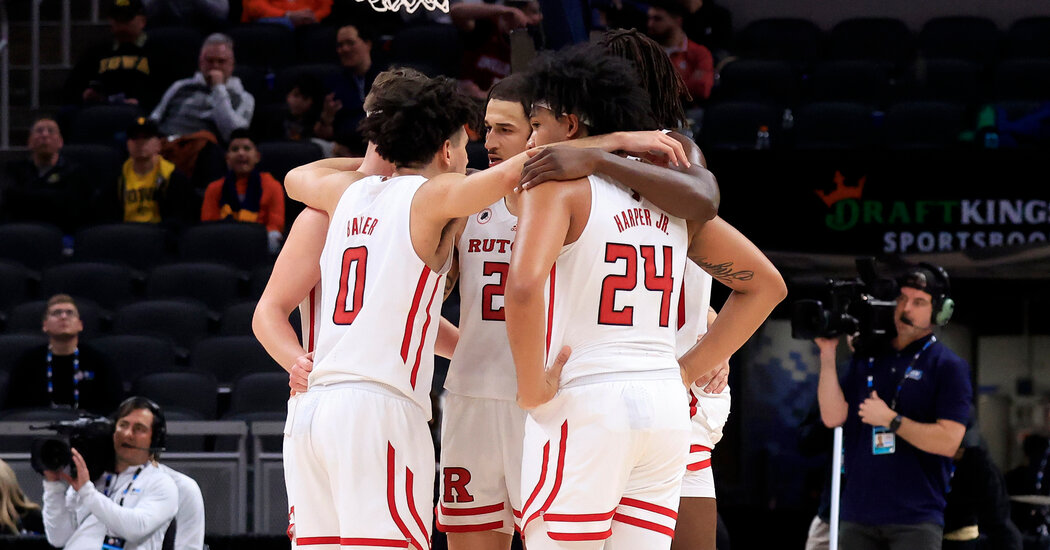 The questions going into each N.C.A.A. men’s basketball tournament tell us about a moment in time.

Last year, those questions centered on coronavirus restrictions and player-led protests over gender equity and the right for players to earn money for their fame.

Gonzaga tried to become the first team since Indiana in 1976 to run through a season unbeaten — until it lost to a worthy champion, Baylor, in the title game. There were upsets galore, with 12th-seeded Oregon State nearly making the Final Four, and indelible moments, like Gonzaga guard Jalen Suggs’s nearly halfcourt heave that broke U.C.L.A.’s heart in the semifinals.

As the tournament begins Tuesday with the first of four play-in games, last season, and even the start of this one, seems so long ago. Coronavirus protocols have been eased, as have concerns about players or teams missing games because of a positive test.

And the questions again tell us about a moment in time.

Who are the favorites to reach New Orleans, the site of this year’s Final Four? Who are the sleepers? Who is going to beat Duke?

The questions now, for the first time in more than two years, are more centrally about basketball.

Upset special: No. 11 seed Rutgers over No. 6 Alabama. The Crimson Tide aren’t close to the same defensively this season and neither is their 3-point shooting. If Rutgers beats Notre Dame in a play-in game and then contains Alabama’s speedy Jahvon Quinerly, it can move on.

Keep an eye on: Teddy Allen, at his fifth school in five seasons, gives New Mexico State a gunner’s chance of taking down Connecticut.

Best pro prospect: Gonzaga’s Chet Holmgren is not only the best player on the best team, but the 7-foot-1 freshman is likely to be the top pick in the N.B.A. draft.

Best story: Hyunjung Lee, a South Korean forward for Davidson, is getting N.B.A. looks and drawing comparisons to Stephen Curry for his 3-point stroke. But if the Wildcats make a deep tournament run, as Curry did in 2008 when they were also a 10th seed, you’ll learn about Lee’s rock star status among Koreans.

Familiar face, new place: Kevin Obanor, who helped carry Oral Roberts on a stunning run to the round of 16, has fit in seamlessly at Texas Tech.

Upset special: No. 10 seed Loyola-Chicago over No. 7 Ohio State. The Buckeyes have lost four of their last five — only one to an N.C.A.A. tournament team. The Ramblers hunt good shots on offense, have a battle-tested leader in Lucas Williamson and it is hard to go against everyone’s favorite smack-talking, geriatric nun, Sister Jean Dolores Schmidt.

Best pro prospect: Arizona guard Bennedict Mathurin, a sophomore with a silky stroke and elite athleticism, has a game built for the N.B.A.

Best story: Colorado State guard David Roddy was a 270-pound, all-state high school quarterback who was recruited by Iowa — to play defensive line. He was the Minnesota state champion in the discus. Now, sticking to one sport, he is knocking in 45 percent of his 3-pointers and 65 percent of his 2s. He also passes and rebounds. The Mountain West player of the year is a nightmare matchup for anyone, beginning with Michigan.

Familiar face, new place: Silvio De Sousa found nothing but trouble in Kansas. He was suspended by the N.C.A.A. for a season after the F.B.I. college basketball corruption investigation found his guardian had received illicit payments from an Adidas representative. He was also suspended two other times — once for a brawl against Kansas State and another time for a bar fight. De Sousa is now at Chattanooga, where he had 17 points and 14 rebounds in the Southern Conference title game.

Upset special: This bracket is rife with upset candidates (see below), but the one that screams out is No. 11 seed Iowa State over No. 6 Louisiana State, which suddenly finds itself without Coach Will Wade and his assistant Bill Armstrong, who were fired on Saturday.

Keep an eye on: Creighton’s 7-1 center, Ryan Kalkbrenner, was Gonzaga center Chet Holmgren’s backup on the U.S. under-19 team and is starting to play like him. A sophomore, he is averaging 17 points, 9 rebounds and 2.4 blocks over the last 11 games. He is a difference maker on defense and frees up the Bluejays’ shooters by being a threat inside.

Best story: Grant Golden, a slick passing sixth-year senior for Richmond, was granted an extra year of eligibility after collapsing on the court as a freshman with what was diagnosed as an irregular heart beat. He underwent a cardiac ablation procedure and returned the next season.

Familiar face, new place: Walker Kessler, Auburn’s 7-1 center, was stuck to the North Carolina bench last year. But he — along with his fellow transfers K.D. Johnson (from Georgia), Wendell Green Jr. (from Eastern Kentucky) and Zep Jasper (from the College of Charleston) — could lead Auburn back to the Final Four for the second time in four seasons.

Upset special: No. 11 seed Virginia Tech over No. 6 Texas.Texas will slow the game down, but that suits the Hokies just fine, giving Storm Murphy time to probe the defense.

Keep an eye on: When Kellan Grady, the Kentucky sharpshooter who previously played for Davidson, made seven 3-pointers in a rout at Alabama last month, he was shooting 45 percent beyond the arc for the season. He is only 5 for 22 on 3-pointers since, including 0 for 5 in a SEC tournament semifinal loss to Tennessee. The Wildcats’ Final Four hopes hinge on Grady’s return to form.

Best story: Akron forward Enrique Freeman showed up on campus four years ago on an academic scholarship with no plans to play basketball. He turned up at an open tryout the next year, and Coach John Groce thought he would be a nice scout team player. Then he put on 25 pounds and became the Mid-American Conference defensive player of the year this season. He put up 23 points and 8 rebounds in a win over Kent State and was named the MAC tournament most valuable player.

Familiar face, new place: Brady Manek, who played for four years at Oklahoma — as did his brother and parents — has thrived at North Carolina, stretching the floor for Armando Bacot as the Tar Heels have played much better down the stretch.