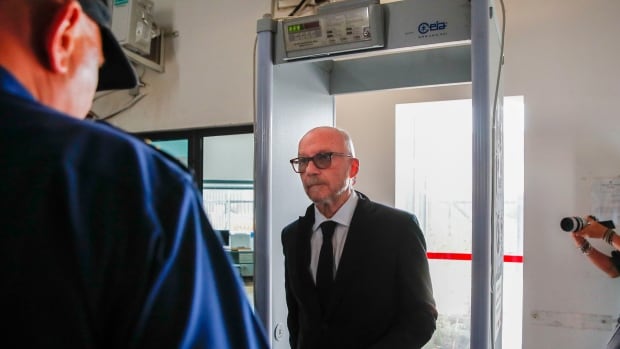 Canadian-born director and screenwriter Paul Haggis, who was arrested on Sunday evening in Italy on charges of sexual assault and grievous bodily harm, declared his innocence before a judge on Wednesday.

Haggis, 69, made a court appearance in the southern town of Ostuni, presenting his version of events through an attorney after a British woman accused Haggis of sexually assaulting her over the course of several days last week.

“The [sexual] relations he had with this woman were totally consensual during these three days spent together in Ostuni,” said Haggis’s lawyer, Michele Laforgia. “Contrary to what is assumed in the charges, there is no sign of injury and no sign of violence. I believe the judge misinterpreted the report from the hospital emergency room where the young woman was examined after the complaint.”

A statement from prosecutors says authorities at the Brindisi airport found the alleged victim in a dazed and “precarious psychological and physical state” early in the morning after Haggis dropped her off. Airport workers contacted the state police in Brindisi, with whom the woman filed her report of being raped by Haggis.

She was examined at the hospital under Italy’s “pink protocol” for sexual assault victims.

Haggis has been under house arrest near Ostuni since Sunday night, where police tell CBC News he is with members of his family who were already in Italy before his arrest.

Haggis is now awaiting the judge to rule on his arrest and his request to remain under house arrest, rather than in jail, until what is known in Italy as “an evidentiary incident,” when the accused and the alleged victim appear before a judge and may be cross-examined.

A judge will then decide whether to proceed with a trial or not.

Born in London, Ont., Haggis began working in episodic television in Hollywood in the 1980s. He earned an Academy Award for just the second motion picture he directed, 2004’s Crash, and has screenwriting credits for the Clint Eastwood films Million Dollar Baby and Flags of Our Fathers, as well as the James Bond movies Casino Royale and Quantum of Solace.

The director was in the tourist town in the heel-shaped southern Italian region of Puglia to attend the Allora film festival, where he and his adult children were scheduled to speak and lead master classes on filmmaking and screenwriting.

Oscar-winning filmmaker Paul Haggis is under house arrest near Brindisi, in southern Italy. He is being investigated over allegations he sexually assaulted a young woman over two days.

The festival was launched this year by Los Angeles-based Italian journalist Silvia Bizio and Spanish art critic Sol Costales Doulton. Organizers after the arrest distanced themselves from Haggis, cancelling all the events involving him and his children, and issued a statement expressing “full solidarity with the woman involved in the matter.”

Haggis has been accused of sexual assault by four other women in the U.S., with one civil lawsuit still pending. If convicted of the charges in Italy, he could face up to 10 years in prison.

CBC sent messages to Bizio and Doulton asking them if they knew of the sexual assault accusations in the U.S. against Haggis before inviting him to the festival. Neither responded.

Prior to the festival, Haggis was hired to direct a promotional film for the town of Mesagne in Puglia, which is a European Capital of Culture for 2024.