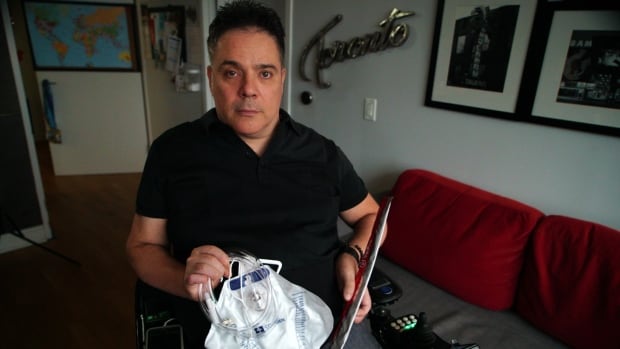 Paralyzed from the chest down, Chris Stigas has to use catheters and other medical supplies to urinate — but the Toronto man says he has no choice but to roll the dice on his health by reusing supplies because the system won’t provide enough clean ones and he can’t afford to buy them.

Stigas suffered a severe spinal cord injury in 2014 after slipping in his bathroom in the middle of the night and hitting his neck on the tub.

He said he’s been forced to reuse urine collection bags needed for his catheters — against medical warnings that reusing them can cause infection and other serious health complications.

“It makes me feel like I’m a second-class citizen,” Stigas told Go Public. “It’s a constant source of anxiety, always having to consider where I’m going to find money to pay [for] my medical supplies.”

Stigas gets slightly more than $1,000 a month from the Ontario Disability Support Program that is supposed to cover his medical supplies. That funding falls about $600 short of the amount he needs to purchase what’s medically recommended each month.

Research studies show an estimated 47,000 Canadians with spinal cord injuries rely on catheters as essential medical equipment. But advocates say Canada’s medical system is leaving many short because the ability to urinate without taking health risks depends on where you live and what you can afford.

Each province and territory decides what medical supplies it will cover and for how much, leaving many patients without, said Peter Athanasopoulos, director of public policy and government relations for Spinal Cord Injury Ontario.

Stigas’s funding covers about one-quarter of the cost of the catheters he needs, not counting the other related equipment. Because of that, he said, taking medical risks and shortcuts is the norm.

And he’s not the only one.

Go Public interviewed spinal cord injury patients and advocacy groups across the country who say some catheter users are also risking their health because of the shortfall: intentionally dehydrating themselves to avoid filling their bladders, boiling medical equipment to try to disinfect it or using cheaper, unlubricated catheters, which research shows doubles the risk of urinary tract infections.

Several studies, including this one by a task force headed by the Urology Nurses of Canada, shows the safest type of catheter is self-lubricated, which minimizes the risk of infection.

The average patient needs four or five of those a day, with a potential out-of-pocket cost of $2,500 for bladder management supplies per month, according to a 2021 policy paper by Spinal Cord Injury Ontario.

Some patients have their equipment covered by extended health-care insurance, workers compensation programs or insurance settlements. Many others, though, are at the mercy of the provinces they live in.

“It seems completely unbelievable that we all live in Canada and there’s different levels of coverage for medical supplies when it should be the same for everybody. A spinal cord injury is a spinal cord injury…. It needs to be more equal,” Stigas said.

A Toronto man paralyzed in a fall years ago is now struggling to pay for some basic medical supplies because they’re not covered by the province’s health system. Advocates say it’s a problem many Canadians face. 2:01

“There really isn’t a standard of practice across Canada … related supplies to all [intermittent catheter] users, not just people with spinal cord injuries,” he said, referring to others who need catheters, like patients with multiple sclerosis or  Parkinson’s disease.

Since launching its #peeforfree campaign in 2018, Spinal Cord Injury Ontario has been pushing health-care authorities for a program that would cover the use of home catheters regardless of income, location or insurance status.

As it stands, Stigas’s home province of Ontario is among the provinces with the least coverage, with no dedicated catheter supply programs except for people with very low incomes on social assistance.

That’s also the case in Manitoba and British Columbia. There is partial coverage in Alberta and New Brunswick that includes income-based and prescription-based programs.

Saskatchewan’s funding, on the other hand, is considered by advocates to be the gold standard, based solely on the needs of the patient, where the medical supplier bills the government directly and supplies are shipped directly to the patient’s door.

It’s not clear what fully funding these kinds of medical supplies would cost the provinces and territories.

Another question is why there is so much inconsistency in funding and patient access across the country.

“The short answer is we really don’t know,” said associate Prof. Kristine Cowley, director of the spinal cord research centre at the University of Manitoba.

She said catheters are not the only example of medical essentials being excluded from government funding. She cites insulin, for example, and how Type 1 diabetics are not guaranteed funding for it everywhere in Canada.

Athanasopoulos suspects limiting coverage is a cost-saving effort, but says the math doesn’t add up.

The study says better management of those complications could reduce the costs.

Another study from 2016 shows a single hospital admission from a urinary tract infection complication can result in a cost of $5,000 to $190,000 to the Canadian health-care system.

An update to the 2013 Health Canada-funded study is in the works, but no publication date has been announced.

Athanasopoulos said besides the substantial savings to the health-care system, improving access to catheters would have a social benefit, too.

“Downstream of savings from going to the hospital, reducing infection, improved quality of life, more capability of sustainable gainful employment, the amount of opportunities just by giving people the ability to pee for free is tremendous.”

Stigas has had temporary relief from the cost for almost two years. As a temporary solution to care worker staffing issues, he was given an “in-dwelling” catheter during the pandemic, more commonly used in hospitals.

It’s changed monthly by a nurse and covered by the health-care system, but that type of catheter holds an even higher risk of infection and can become dislodged or plugged.

Stigas said in the next few months he will likely return to using the intermittent catheters, so he wants Health Canada and the provinces to step up and fund the medically recommended catheters and related medical supplies — not only for himself but for the thousands of others in similar situations.

“In the early years when people were having spinal cord injury, they would pass away from kidney failure because they couldn’t manage their bowel and bladders properly. So the fact that we still have to fight for this kind of stuff in 2022 is completely outrageous,” he said.

Go Public asked both Ontario’s Ministry of Health and Health Canada about the health implications and financial hardship being caused by the lack of universal coverage for catheter products for those with spinal injuries.

The Ontario Ministry of Health didn’t address the problems patients are facing, only saying “Ontario will continue to review the evidence and funding models of other jurisdictions.”

Health Canada said “the health and safety of Canadians is the government’s top priority,” but said medical devices, including catheters, are the jurisdiction of provinces and territories.

Go Public is an investigative news segment on CBC-TV, radio and the web.

We tell your stories, shed light on wrongdoing and hold the powers that be accountable.

If you have a story in the public interest, or if you’re an insider with information, contact GoPublic@cbc.ca with your name, contact information and a brief summary. All emails are confidential until you decide to Go Public.