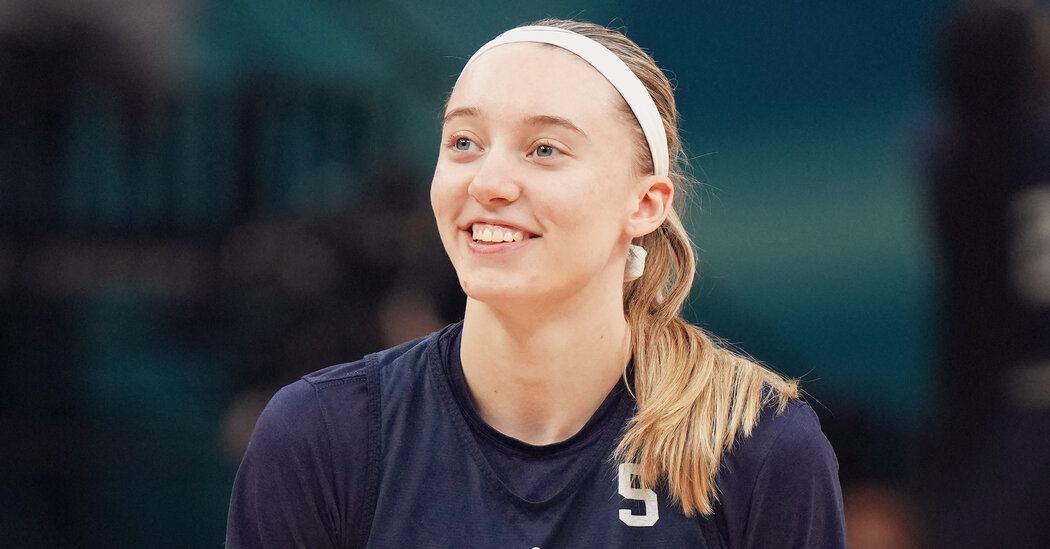 MINNEAPOLIS — Brian Cosgriff first saw Paige Bueckers play when she was in second grade, during a scrimmage at the University of Minnesota.

She was playing against fourth graders “and dominating.”

“Paige was a peanut, she was a tiny little thing,” said Cosgriff, Bueckers’s former head basketball coach at Hopkins High School. “As a seventh grader she was still a peanut, only this time, she was dominating the junior varsity team.”

This has been a common refrain for Bueckers, all the way to the Final Four in Minneapolis this weekend. Bueckers is a field general, even by the demanding standards of point guards, constantly moving and directing to all corners of the court as she fills in gaps where she’s needed most.

She’s no peanut anymore, either. Bueckers, a 5-foot-11 sophomore, will try to lift No. 2-seeded Connecticut out of its worst regular season since 2004-5 to its first national championship since 2016.

The moment could not be more significant for Bueckers, with the potential of a championship this weekend and the less immediate, though no less clear, prospect of a W.N.B.A. career down the line. The 20-year-old returned to the court in late February, two and a half months after undergoing major knee surgery, and has ramped up her playing time as UConn has made a title run.

A month ago, she was playing just 13 minutes a game; on Monday night, she played 45 when UConn needed double overtime to get past North Carolina State in the round of 8.

“I was just really motivated. The doctors and people around me, we had a conversation and they told me that there’s a chance I could play this season,” Bueckers said on Thursday. “So I was going to do whatever I could to get back, to get healthy and to get back on the court with my team.”

UConn’s game against Stanford, a No. 1 seed and the reigning champion, will be a homecoming of sorts for Bueckers, who grew up just 15 miles from Target Center, the home of the N.B.A.’s Timberwolves and the W.N.B.A.’s Lynx, where she plans to play on Friday night. After Bueckers scored 15 of her 27 points in overtime against North Carolina State on Monday, the significance of the team’s next stop was not lost on the Minnesota native.

Crazy is one way to describe Bueckers’s remarkable journey back to Minneapolis.

Her varsity debut at Hopkins came as an eighth grader, when Bueckers came off the bench to hit seven 3-pointers in a row to win a game. “Everyone saw her greatness,” Cosgriff said.

She would go on to lead her team to five consecutive state championship games, graduating with a 62-game winning streak. Bueckers’s performances drew crowds of 4,000 fans to the school’s arena in Minnetonka, Minn., Cosgriff said. The coach was so confident in her that he called her “my coach on the floor.”

“She was so smart, she had such a high basketball IQ,” he said. “She would call stuff on the floor and she was so spot on, I didn’t even have to say anything.”

Early in her time at Hopkins, Cosgriff threw out a question: If Bueckers could play for one college team, which would it be? Her answer was definitive: UConn. Cosgriff flagged the former Minnesota Golden Gophers star Marisa Moseley, who was an assistant at UConn when Bueckers was starting to gain attention as the top recruit in the country. Moseley and UConn’s coach, Geno Auriemma, responded with a heavy recruiting effort.

When Bueckers arrived at UConn, the Huskies began to rely on her for nearly everything. She led her team in points, assists, steals and 3-point field goal percentage her freshman year, becoming the first player in UConn history to score 30 points in three consecutive games. Spectators were quick to compare her to other great Huskies like Maya Moore, Sue Bird, Diana Taurasi and Breanna Stewart. But none of them earned a women’s national player of the year award as a freshman, as Bueckers did last year for the first time in the award’s history.

So when she started her sophomore year, expectations were high. Bueckers came in hot, opening the 2021-22 season with 34 points against Arkansas on Nov. 14. She was averaging 21.2 points, 6.2 assists and 5.5 rebounds by Dec. 5.

Then came the injury.

With less than a minute to go in a game against Notre Dame, Bueckers dribbled up the court to set up the a play. There was no rush, UConn was up by nearly 20 and the game was in the bag. But just as she approached half-court, her left knee buckled. Bueckers tried to keep going, but stumbled to the floor. A whistle blew, Bueckers drew a fist to her mouth in agony and her teammates huddled around her in front of their bench.

Bueckers had suffered an anterior tibial plateau fracture and a lateral meniscus tear.

“I was devastated,” Bueckers said. “I was just trying to make sense out of it, trying to find the positives, the lights in it. My teammates, my coaches did a really good job of helping me out. Its easy to isolate yourself and get down and upset, but they kept my spirits high.”

The Final Four in the Men’s and Women’s Tournaments

The national semifinals. March Madness is narrowing down to the top teams, and will culminate with the Final Four teams facing off in the women’s and men’s tournaments on April 1 and April 2, respectively. Here’s a closer look at the semifinals:

Women’s: Stanford vs. Connecticut. After injuries, losses to unranked teams and a second-round scare, the UConn Huskies advanced to their 14th straight Final Four, where they will face Stanford, the reigning champion. The Cardinal bested Texas to reach the national semifinals.

Auriemma said he had not been sure whether Bueckers would be able to play at a high level this season, but that her “positivity” helped speed her recovery.

“If you’d have asked me two weeks ago, ‘Can Paige play 40-some minutes in a double-overtime game this past Monday night, against as good a team as we’ve ever played in this tournament?’, I would say, ‘No, she can’t,’” he said on Tuesday. “But she got better and better as the game went on.”

He added: “She just happens to do things that are difficult to explain.”

Tara Starks, the women’s basketball coach at Hopkins, who has known Bueckers since she was in fourth grade, credited her success to staying consistent on and off the court.

“You always know what you’re going to get with her,” Starks said. “She’s been exactly the same since she was a kid. She’s always been extremely loyal and protective of the people she’s closest to.”

Bueckers seized on the N.C.A.A.’s new name, image and likeness rules and became the first college athlete to be signed by Gatorade, among other lucrative deals. She has also used her reach to shine a spotlight on issues close to her, including gender and racial equity. Bueckers’s nine-year-old brother, Drew, has a Black mother and a white father, and in the wake of police killings of Black men and women in the summer of 2020, Bueckers used Instagram to call for change.

“At what point do they stop looking at my little brother as a cute little boy and instead as a threat to society?” she wrote. “It scares me. I’m going to work for change little brother. I want you to grow up in a world that accepts you for who you are.”

At the 2021 ESPY Awards, Bueckers used a speech to spotlight the Black women in her life and to call for better representation in basketball. Starks said she knew “a small bit of that was meant for me.”

She added: “When she sees that sort of thing and is in a position to speak up, she does.”

Bueckers is confident in everything she does, Starks said, for better or worse.

“She always thinks she’s got the best moves, even the best dance moves,” Starks said, laughing. “Every now and again I have to tell her her rhythm is a little off.”