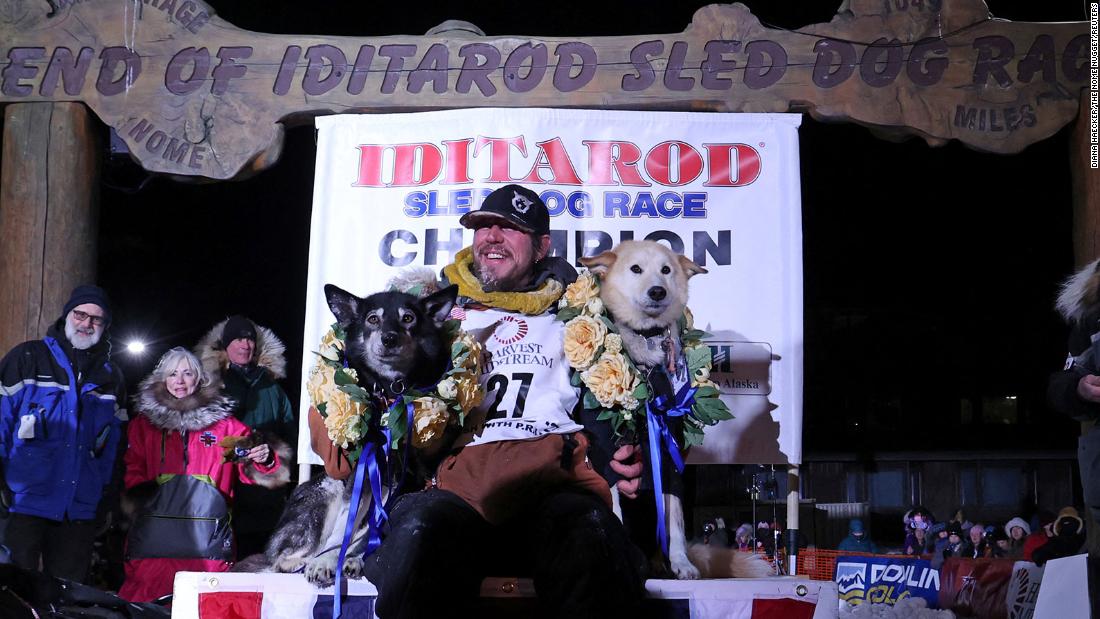 A cheering crowd greeted Sass and his dog team when they reached the finish line on Nome’s Front Street at 5:38 a.m. His elapsed time of eight days, 14 hours and 38:43 minutes was one of the fastest times in the Iditarod’s 50-year history.

It was the first Iditarod victory for Sass, who lives in Eureka, a tiny settlement outside of Fairbanks.

Until now, his third-place finish in last year’s Covid-19-altered race was his best Iditarod result. Even so, as three-time winner of the Yukon Quest International, a separate 1,000-mile sled dog race, Sass was considered a top contender from the start of this year’s Iditarod.

His win seemed assured for days. He held a steady lead from the race’s halfway point at Cripple, an abandoned mining settlement that he reached last Wednesday.

In the final stretch, he was consistently more than two hours ahead of his nearest rival, five-time champion Dallas Seavey. Seavey managed to make up some time in the last miles to Nome and finished a little more than an hour after Sass.

For his victory in the world’s most famous sled-dog race, Sass will take a share of the Iditarod’s total $500,000 prize purse. The exact amount of his prize is yet to be determined, but winners in the past 10 years have usually taken home at least $50,000, according to Iditarod records.

Sass grew up in Minnesota and moved to Alaska in 1998 to attend the University of Alaska Fairbanks where he was a member of the cross-country ski team.

His time on the local Nordic trails exposed him to dog mushing, and he learned the sport from Susan Butcher, the legendary four-time Iditarod champion, and her husband, David Monson.

For all the teams, this year’s race represented a return to normalcy, for the most part. A year after Iditarod mushers raced on an altered, out-and-back 860-mile (1,384-km) course that deviated from the usual route through Native villages, this year’s race was back on the traditional trail.

Forty-nine teams started on March 5 with a ceremonial 11-mile (18-km) run through Anchorage, and timed competition started the next day from Willow Lake, a site about a 75-mile (120-km) drive north of Anchorage.

This year’s race featured a few Covid-related alterations. Mushers, officials and volunteers were required to be vaccinated and had to submit to regular testing, and checkpoints were relocated slightly to minimize risks of disease spreading into remote villages, which have sparse medical services.

One last-minute change forced by the pandemic was a high-profile substitution.

Nic Petit, a French-born musher who was considered a top contender, tested positive for COVID-19 just days before the start. Four-time champion Jeff King, who had not been planning on running this year’s race, stepped in to drive Petit’s dog team to Nome.

The Iditarod has changed drastically since race founder Joe Redington Sr. mortgaged his house to stage the first race in 1973. That year, the winner reached Nome in 20 days, and the event was likened to a 1,000-mile camping trip.

Now top Iditarod mushers are professionals with corporate sponsors, and they travel with much more speed through the Alaska wilderness. The Iditarod speed record is eight days, three hours and 40:13 minutes, set by Mitch Seavey in 2013.