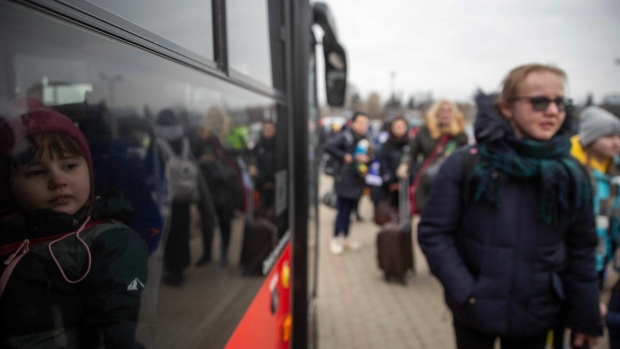 Canada has not set a limit on how many Ukrainian refugees, wishing to come temporarily, it will accept for one main reason — most want to return home, Canada’s immigration minister says.

“One of the first things we heard from the Ukrainian-Canadian community is that the vast majority of the people who want to come to Canada don’t want to stay,” Immigration, Refugees and Citizenship Minister Sean Fraser told CTV’s Question Period on Sunday.

“If we learned anything about Ukrainians who are fleeing this conflict, it’s that they love their homeland and they want to go back when the war is over.”

The federal government announced two new programs for Ukrainian refugees earlier this week: one for those wishing to stay permanently and another for those who want to come temporarily, referred to as the Canada-Ukraine Authorization for Emergency Travel.

It comes as Canada has accepted 6,265 Ukrainians since the beginning of January, Fraser says.

Canada is home to the world’s second-largest Ukrainian diaspora after Russia, with about 1.3 million people.

Fraser says in considering how to bring Ukrainians to Canada, a refugee resettlement program would have taken too long. The federal government also is waiving most visa requirements to help those wishing to come to Canada temporarily.

In response to calls to make travel for Ukrainian refugees visa-free, he says the necessary changes from a regulatory and IT point of view would have taken anywhere from 12 to 14 weeks to set up.

He also says the federal government wants to prevent those fighting against Ukrainian forces, such as in the separatist Donbas region of Ukraine, from getting into the program.

“We’ve managed to get biometrics in the region over the past six weeks, so we can process people for security on an expedited basis and welcome people here as fast as possible, but also in the safest possible way,” Fraser said.

Asked about the difference in programs for Ukrainian versus Afghan refugees, Fraser says one of the biggest differences is those fleeing Afghanistan are looking to come to stay permanently.

Canada has pledged to resettle 40,000 Afghans, many of whom helped Canadian Armed Forces during the war in Afghanistan. As of March 4, Canada has resettled 8,580 Afghan refugees.

While Ukrainians fleeing their country have safe passage to other neighbouring countries such as Poland, Slovakia or Hungary, Fraser says Canada is helping a specific group of Afghan nationals who are largely still in Afghanistan, which remains under Taliban control.

“So the circumstances are quite different between the two efforts, but I’m very proud because Canada in both Ukraine and Afghanistan has really become the world leader when it comes to welcoming those fleeing humanitarian crises,” Fraser said.

With the current conflict in Ukraine continuing unabated following Russia’s invasion of the country about a week-and-a-half ago, Prime Minister Justin Trudeau is set to meet with his European counterparts starting Monday, including the prime ministers of the United Kingdom and the Netherlands, as well as leaders in Riga, Latvia; Berlin; and Warsaw, Poland.

Canada has sent, or pledged, weapons and millions of dollars in non-lethal support to Ukraine.

Fraser says while Canada wants to do everything it can to support Ukraine’s efforts to defend its homeland and those fleeing the country, NATO’s allies also don’t want to be seen by Russia as the “aggressor.”

Despite calls from Ukraine for a no-fly zone, NATO has ruled out that option as it would effectively mean the shooting down of Russian planes.

“We want to avoid giving any excuse for Putin to start labelling this as a war of aggression on the part of NATO or our western allies,” Fraser said.

“We’re going to do whatever we can to support Ukraine in its time of need, but we do want to avoid creating an excuse to launch a Third World War in Europe.”