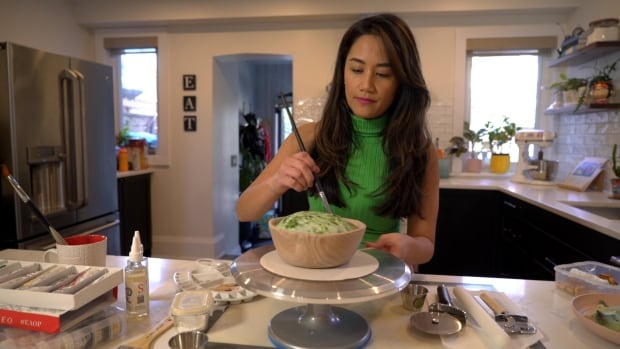 Toronto baker April Julian says she’s a horrible liar. But with the right ingredients and access to a kitchen, she’ll easily fool you with her hyper-realistic cakes.

Her unique skill set was exactly what Netflix was looking for in its new show Is it Cake? that premiered Friday, where Julian competed against other talented bakers to create cakes deceiving enough to win over the judges for a prize of $50,000.

“The thing about cakes that look like cakes, they’re actually, to me, harder to make than hyper-realistic ones because they have to be so perfect,” said Julian on CBC Radio’s Metro Morning.

“Real life is imperfect, and that’s a lot easier to mimic.”

April Julian is a local cake artist and contestant on a new Netflix reality show called ‘Is It Cake?’ 6:13

After baking for years, the Filipino-Canadian threw herself into hyper-realistic decorating after being asked to make a cake look like a running shoe. She’s since participated in the trend that’s gone viral on the internet — fooling viewers into thinking she’s cutting or biting into real objects that are revealed to be cakes at the last second.

Outside of making cakes, Julian says she has no artistic background beyond a high school art class. She spends a lot of time looking at reference photos for the cakes she wants to make.

Some of her favourite cakes to cut into are her chicken wing and running shoe cakes, which she says have a high shock value to people who watch her filmed content.

“It’s a real range of reactions — people cringe, people are angry, people are obviously delighted about the surprise,” said Julian. “I don’t know what it is. It’s just there’s so many cool details to mimic.”

The baker has garnered thousands of likes and views on TikTok, but she’s perplexed as to how Netflix found her before she started gaining traction on social media.

“This is a question that still evades me,” said Julian, who is also the director of education at the Canadian Civil Liberties Association. “[It was] just this random thing that came into my inbox that I immediately thought was a phishing scam, and it just turned out to be the real deal.”

Since she can’t eat all her cakes by herself, many of her creations end up going to not only clients, but friends and family happy to take her latest experiments off her hands.

The next thing on her to-make list is from a popular Filipino fast food chain as an homage to her culture.