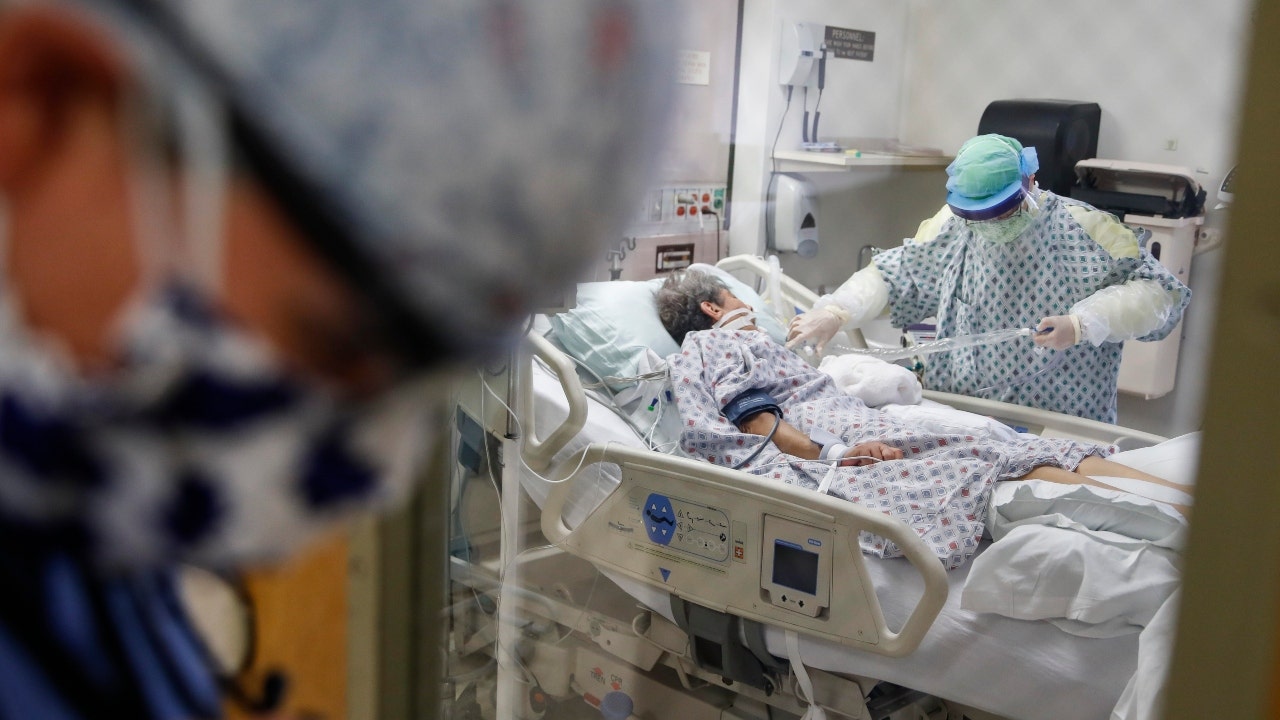 Different variants of SARS-CoV-2, the virus that causes COVID, may give rise to different long COVID symptoms, according to a study that will be presented at the European Congress of Clinical Microbiology & Infectious Diseases (ECCMID 2022) in Lisbon next month.

FILE – In this April 20, 2020, file photo, resident physician Leslie Bottrell stands outside a room at an Intensive Care Unit as a nurse suctions the lungs of a COVID-19 patient at St. Joseph’s Hospital in Yonkers, N.Y.
(AP Photo/John Minchillo, File)

The study led by Dr. Michele Spinicci and colleagues from the University of Florence and Careggi University Hospital in Italy performed a retrospective observational study of 428 patients who were treated at the Careggi University Hospital’s post-COVID outpatient service between June 2020 and June 2021. According to the release, that was the period when the original form of SARS-CoV-2 and the Alpha variant were affecting the population.

According to the report, at least three-quarters 325/428 (76%) of patients reported at least one persistent symptom. The most common symptoms reported by the group of long COVID patients were shortness of breath (37%) and chronic fatigue (36%).  These were followed by sleep problems (16%), brain fog (13%) and visual problems (13%), according to the release.

The researchers’ analysis suggested that individuals with severe cases, who required immunosuppressant drugs such as tocilizumab, were six times as likely to report long COVID symptoms and those who were treated with high flow oxygen support were 40 percent more likely to experience long hauler symptoms.

The release also noted that women compared to men, were almost twice as likely to report long COVID symptoms. The authors noted that patients with type 2 diabetes seemed to have a lower risk of developing long COVID symptoms and said further studies are needed to better understand this finding.

Upon further evaluation of the long COVID symptoms, the researchers discovered a substantial change in the pattern of neurological and cognitive/emotional problems reported by patients infected during the period between March and December 2020, when the original SARS-COV-2 was dominant, compared to those reported by patients infected between January and April 2021 when alpha was the dominant variant.

The release stated that the researchers found when the alpha variant was the dominant strain, the prevalence of muscle aches and pain, insomnia, brain fog and anxiety/depression significantly increased, while loss of smell, dysgeusia (a distorted sense of taste), and impaired hearing were less common.

“Many of the symptoms reported in this study have been measured, but this is the first time they have been linked to different COVID-19 variants”, Dr. Spinicci said in the release. “The long duration and broad range of symptoms reminds us that the problem is not going away, and we need to do more to support and protect these patients in the long term. Future research should focus on the potential impacts of variants of concern and vaccination status on ongoing symptoms.”

Data for the study was obtained from electronic medical records of patients who were hospitalized with COVID-19 and discharged 4-12 weeks before being seen for outpatient service. The data for the study included a questionnaire on persistent symptoms completed by the individuals on average 53 days after hospital discharge. Additional data included patient demographics, medical history, and microbiological and clinical COVID-19 course, the release said.

Emergency Room nurses speak to each other at the Houston Methodist The Woodlands Hospital on August 18, 2021, in Houston, Texas.
(Brandon Bell/Getty Images)

Dr. Aaron Glatt, chief of infectious diseases at Mount Sinai South Nassau in New York, was not part of the study but told Fox News that it would be surprising if there were not such differences.

Glatt, who is also a spokesperson for the Infectious Diseases Society of America also said, “It is eminently clear that the different variants have different capabilities. Clearly, some of them are more contagious, and some of them are able to cause more severe illness. Likewise, some variants have a greater predilection for different age groups. Therefore, it is no surprise that there may be differences in “long COVID” between the variants as well.”

The release also stated that the authors acknowledged, “The study was observational and does not prove cause and effect, and they could not confirm which variant of the virus caused the infection in different patients—which may limit the conclusions that can be drawn.”