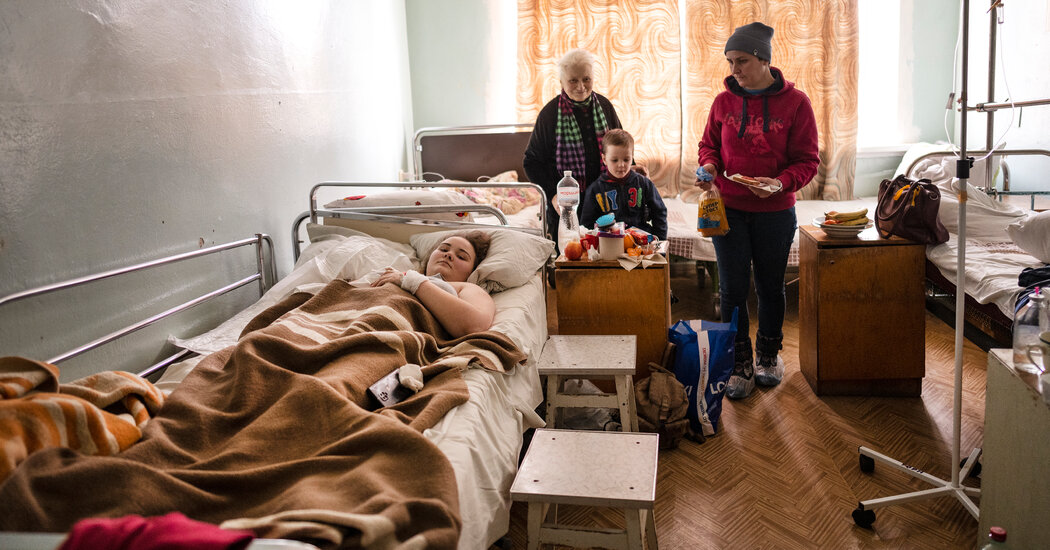 Huda Khayti endured years of deprivation under siege by Syrian government forces in a rebel-held Damascus suburb. The thing she said she remembers most is the screams of her neighbors’ hungry children in the middle of the night.

When she saw the reports of similar sieges playing out in Ukraine, this time at the hands of Syria’s closest ally, Russia, she said it stirred up bitter recollections for Syrian survivors of their own government’s attempts to starve them into submission. Many of them spent years in blockaded towns with dwindling supplies of food, fuel and medicine, where people eventually resorted to eating grass, leaves and even cats.

“I would wake up from their screams because they wanted to eat,” recalled Ms. Khayti, now a 42-year-old manager of a women’s center in the last rebel-held Syrian province of Idlib. “With every image I see, I am going back and living the moments that I lived in Ghouta,” she added, her voice beginning to tremble. “It’s very similar.”

Ghouta, a Damascus suburb besieged from 2013-2018, was just one of a long list of rebel-held towns and cities that the Syrian government forces and their allies surrounded and cut off from the rest of the country to crush an armed uprising against President Bashar al-Assad’s authoritarian rule that morphed into an 11-year-old civil war. Such sieges enabled the Assad government to claw back control over much of the country.

Russia’s military played an integral part in the Syrian war and supported Mr. al-Assad in many ways, including airstrikes that targeted and killed civilians. The Russian Air Force repeatedly bombed hospitals in Syria in order to crush the last pockets of resistance to the government, according to an investigation by The New York Times.

The war in Ukraine, in many respects, is following an eerily similar playbook to the war in Syria, with sieges of cities like Mariupol and the targeting of hospitals and schools — all tactics meant to cower the population into surrendering quickly. Many Syrians blame Russia for introducing the military tactic of sieges to Syria after using it notoriously against the city of Grozny to crush separatism in the Russian region of Chechnya.

Houaida Muhi Deen, 48, said her family lived for two years in the town of Madaya, near Damascus, which was held by rebels at the time and endured one of the worst sieges of the war. One day, her brother, after much effort to secure a few bullets, shot a sparrow to feed his family, she recalled. After he cleaned the bird, he stepped away for a moment to light a fire to cook it. But his 5-year-old son grabbed the bird and began to eat it raw.

Others in Madaya ate stray cats and wild hedgehogs, she said. Her mother spent a week eating nothing but broth.

The Syrian Network for Human Rights, an independent monitoring group, said about 1,000 civilians, among them more than 400 children, have died as a result of sieges over the course of the war, from causes including starvation and lack of medicine.

In the northern city of Aleppo, once the commercial capital of Syria, the opposition-held half was blockaded by government forces for nearly six months in 2016.

Some people added wood pulp to za’atar, a thyme spice mix, in order to bulk it up and make it last longer, said Ahmad Aziz, a survivor of the Aleppo siege and a program officer with the Big Heart Foundation, one of the aid groups that was in the city at the time.

Bakeries stopped operating because of a lack of flour and targeted airstrikes. Pain killers and antibiotics ran out quickly and people relied on medicinal herbs used in teas such as chamomile, lemon balm and wild thyme to treat illness and pain. But even those soon became scarce and people would scour networks of friends and neighbors just to find a small amount.

Like in Ukraine now, the weather near the end of Aleppo’s siege was bitterly cold. Anything that could be burned was, including doors, sofas and window frames. At his home where 11 people lived, Mr. Aziz said he burned an entire suitcase of summer clothes once — using a few items of clothing as kindling each day to stay warm.

“I’m extremely pained when I see what they are living through and that it’s the same enemy that was shelling me and my family,” Mr. Aziz said of the Ukrainians under Russian assault. “We feel for them and say, may God be with you.”

To keep generators running, especially those that powered field hospitals, most besieged areas in Syria turned to burning plastic once regular fuel ran out. But the fuel extracted from the plastic bottles and containers was particularly toxic, residents said, and often clogged the generators.

In Ghouta, Ms. Khayti said she spent months in basements and eventually was forced to leave her home. As desperation set in, long after residents had eaten all the chickens, they resorted to eating the chicken feed, grinding it down and making bread out of it. She recalled how her family would buy one potato — all they could afford — to be used as a remedy in case of any stomach illness.

Even as Ms. Khayti closely follows the news from Ukraine, she said that some images are too difficult to watch, like the video of the aftermath of a deadly airstrike.

March 7 was the four-year anniversary of her brother’s death in Ghouta. He and a neighbor had ventured out of the basement where they were sheltering to get water for the families there. Minutes later he was killed in an airstrike, she said. It was just days before the area surrendered and Ms. Khayti and the surviving members of her family boarded evacuation buses to the country’s northwest province of Idlib, never to return to their homes.

“We don’t wish this on anyone,” she said, “not even our enemies.”

In the Damascus suburb of Moadamiya, after a generator running on plastic-bottle fuel broke down at night, doctors had to operate on a patient using only four or five small flashlights, the ones on the end of cigarette lighters, said Nooraddeen Mokhiber, 34, who now lives in France.

The Syrian regime repeatedly deflected blame for the sieges of opposition-held areas, saying it was the fault of the rebels.

“We didn’t understand what a siege was when it began,” Mr. Mokhiber said. “We didn’t think it would last that long and people would be starved in such a systematic way.”

In the early weeks of the three-year Moadamiya siege, which ended in 2016, some residents tried to flee through the town’s farming fields. But they were shot and killed by regime snipers, he said.

“This was a message to us,” he said. “You will die by snipers, shelling or starvation.”

The attacks on those fields made them inaccessible. Instead, people began planting tomatoes, lettuce and chard in any patch of soil in between homes and along roads, Mr. Mokhiber recalled. People lived on one meal a day and in the last months of the siege, that often consisted of raw, bitter and barely edible olives and any foraged greenery.

Once he returned home after a day of not eating anything. He had been out all day documenting airstrikes and asked his mother what there was to eat.

“‘I wasn’t able to get anything,’” she told him. “Go in the kitchen. There is a plate of olives.”

He ate five raw olives, despite their bitter taste which he still remembers to this day. They made him sick for two days.

It was common for people to faint from malnutrition, he said.

Having lived through a war that left hundreds of thousands dead and forced millions from their homes, Mr. Mokhiber had hoped that their experiences could at least serve as a lesson for the international community.

“The same scenes are being repeated,” he said. “If you weren’t going to intervene in Syria, at least learn from it and protect other people.”