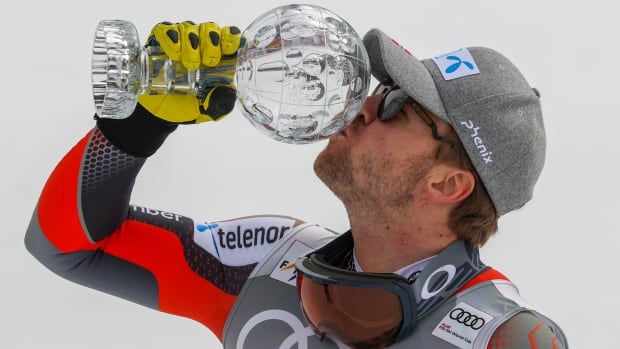 Kriechmayr led at every checkpoint down the new, steep Eclipse course at Courchevel to be 0.34 faster than Marco Odermatt, who sealed his first overall World Cup title.

Jack Crawford was the top Canadian, finishing 1.59 seconds back of Kriechmayr for seventh place. Cam Alexander finished 22nd, and 3.70 behind the winner.

Odermatt was already sure this week to win the giant crystal globe trophy that is the sport’s biggest prize. By finishing ahead of his closest challenger Kilde, the 24-year-old Swiss padded his lead further beyond the uncatchable 300-point mark with three races left this week. Neither skis in slalom which ends the season Sunday.

The pre-race tension was instead about Kilde trying to maintain his 23-point lead in the downhill standings and deny Feuz a World Cup record-tying fifth straight title in the marquee discipline.

Feuz opted to go first wearing the No. 1 bib down the steep 3.1-kilometre hill and posted a target that Kilde, starting minutes later as No. 3, could not match.

Kilde was unbalanced landing the long jump soon after the start, then recovered to lead by 0.07 approaching the flatter, twisting final section. He lost almost four-tenths of a second to the technically correct Feuz.

On seeing his time in the finish area Kilde smiled and opened his arms wide in a gesture toward Feuz, who was seeking to match Austrian great Franz Klammer’s five career downhill titles.

Kilde ended with 13 points more than Feuz and added the downhill title to the crystal globe trophy he already secured in super-G, which is raced Thursday.

Kriechmayr, the 2021 world championships gold medalist, got his 11th career World Cup race win and his fifth in downhill.

You can watch live action from the FIS World Cup Alpine Skiing Finals on CBCSports.ca and the CBC Sports app.

Coverage continues on Thursday with the super-G events, with the women’s race at 4 a.m. ET and the men’s event at 5:30 a.m. ET.

A full schedule of events is below.