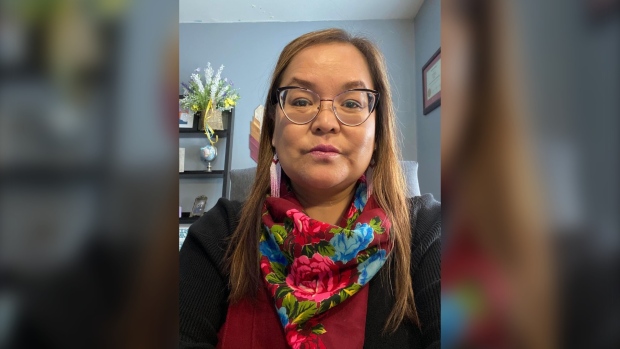 Tania Cameron was watching the fallout from Russia’s invasion of Ukraine from her home in Kenora, Ont., when she felt the need to express her solidarity with Ukrainians on both sides of the world.

“There are Ukrainian people in our towns and cities that are having a very hard time. They aren’t my people, but we are connected, so I’ll stand with you,” Cameron said in a phone interview.

Indigenous people across Canada have been showing their support of Ukraine by posting photos and videos of themselves on social media wearing what is known in many communities as “kokum scarves.”

Cameron, who is Anishinaabe, saw the social media campaign and decided to join. She sourced the scarves from Indigenous and Ukrainian shops and distributed them Canada-wide at cost. She also held a raffle with proceeds going to the Red Cross.

One Ukrainian senior in Kenora found out what Cameron was doing and asked if it was possible forCameron to hand deliver some scarves.

The two spent some time sharing their histories over coffee.

“It was an emotional moment when I was welcomed into her home,” said Cameron.

“She gifted me her grandmother’s scarf and gave me sunflower seeds as a way to thank me for my efforts.”

The sunflower is the national flower of Ukraine and has become a symbol of peace and solidarity.

The square scarves are often embroidered with bright, floral patterns and have been used historically by kokums, the Cree term for grandmother.

Oral history has suggested the scarves were originally brought over to Canada by women from Ukraine and other Slavic countries in the early 1890s when the first Ukrainian settlers came to the country. The scarves are known by various names including khustkas, hustkas or babushkas.

Stories of trading between First Nations, Metis and Ukrainian women were passed down through families on all three sides.

Cameron recalls wearing a kokum as a child.

“We would wear them when we went blueberry picking to try and keep the bugs out of our head and our ears … in the bush in the summertime.”

Cameron was surprised to learn of the headwear’s origins. She said it makes sense Anishinaabe and Cree women would enjoy them as floral patterns are often present in their artwork.

Today, the scarves are often used as a fashion accessory by Indigenous women and men. Powwow dancers incorporate them into their regalia.

Traditionally, Slavic women would wear them when they were married and afterwards, said Ukrainian author Marion Mutala. Women would also wear them for protection while they worked outdoors and for different celebrations.

Mutala is the author of a children’s series called “Baba’s Babushka,” which is based on her relationship with her own grandmother who died when she was four.

About seven years after writing her first book, Mutala met an Indigenous man at a book fair who told her about the significance of the scarf in Indigenous communities.

She decided to research the relationship. Her book “Kohkum’s Babushka” was released in 2017.

“I looked at the commonality of the relationship between Indigenous people and Ukrainians. The Metis people have the fiddle and so do Ukrainians. We have a lot of beadwork the same and spiritual life. There’s a lot of similarities,” she said by phone from her home in Saskatoon.

Tamara Malcolm remembers using the scarves as a teen when she danced at powwows. The Anishinaabe woman recalls her great-grandmother wearing one but, like Cameron, Malcolm didn’t become aware of the history until recently.

“I have a kokum scarf hanging outside my store to symbolize that I’m in solidarity with Ukraine,” she said.

Malcolm started selling the scarves a year ago, but the COVID-19 pandemic stopped large gatherings like powwows, so the items sat on her shelves. Now she’s decided to donate half the proceeds from each scarf to humanitarian efforts for Ukraine and said she has sold nearly 120 of them in the past week. Only a handful are left.

This report by The Canadian Press was first published March 5, 2022.

This story was produced with the financial assistance of the Facebook and Canadian Press News Fellowship.