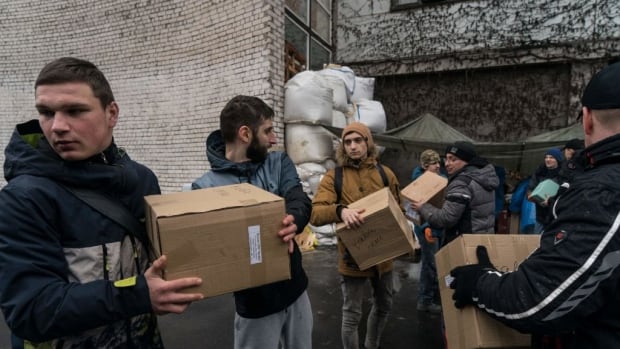 The road from Zaporizhzhia in southeastern Ukraine to Dnipro about 80 kilometres north is riddled with concrete blockades, iron anti-tank barriers, Molotov cocktails and several military checkpoints where soldiers check passports and trunks of cars for war-time contraband.

Drivers hurry on to their destinations, not to avoid oncoming strikes, but to make it home before curfew kicks in at 8 p.m.

Civilians seen on the roads between 8 p.m. and 6 a.m. are considered a threat, and discerning civilians from invaders in the dark can be tricky. The only vehicles on the road at that time are buses carrying soldiers, ambulances and other emergency vehicles and cargo transport trucks.

The city of almost a million people, known as Dnipropetrovsk until recently, is an industrial hub that was once one of the Soviet Union’s closed cities on account of its space and defence manufacturing.

It sits on the Dnieper River between east and central Ukraine and has not come under the kind of shelling that other urban centres to the north, south and east have since Russian forces invaded the country Feb. 24.

Still, during curfew not one pedestrian dares to wander outside. There is no point anyway. The stores close early at 5 p.m., and some businesses have shut down completely, with sandbags covering their windows in anticipation of possible air strikes, artillery shelling or firefights.

Dnipro is a relatively safe distance from the parts of the country experiencing the fiercest attacks from Russian forces. Refugees from Kharkiv to the north, Kherson in the south and Donetsk in the east arrive in Dnipro on a daily basis.

From here, they either find shelter or board a train heading west to Lviv near the Polish border. The trains are packed to the brim. As of Saturday, more than 1.2 million people have fled to neighbouring countries, according to the UNHCR.

But some youth who’ve arrived here travelled in the opposite direction, boarding trains in the west and heading toward danger, instead of away from it.

This is the case for Ilias Spiridis, 25, who is originally from Zaporizhzhia. He’d been living and working in Poland, but when war broke out over a week ago, he returned to Ukraine, first to Lviv and then his hometown.

He spent the 22-hour-long train ride to Zaporizhzhia frantically checking his phone for updates from the war, a common habit now for all Ukrainians, young and old, and reassuring his family.

He, like the other men on the train he took, came this way to volunteer to help resist the Russian invasion, he told CBC News.

“For me, this is not Ukraine’s war against Russia,” said Spiridis, who was born in Ukraine and is of Greek descent.

“For me, this is a war of life against death, not absolute good, but against absolute evil. Freedom against dictatorship.”

His plan is to help evacuate vulnerable citizens from the region, he said, and then protect Zaporizhzhia by signing up with one of the volunteer civilian units helping the military defend Ukrainian cities.

He had hoped to get one of the rifles local authorities were giving out to arm the so-called Territorial Defence Forces, he said, but they had run out.

Alarm over strike at nuclear plant

The war in Ukraine raised fresh global alarm Friday after Russian forces attacked and seized control of a key nuclear plant, also called Zaporizhzhia but about 120 kilometres southwest of the town.

The attack came as the Russian military advanced on nearby Enerhodar, a strategic city on the Dnieper River, and gained ground in their bid to cut Ukraine’s access to the Black Sea. That move could worsen an already dire humanitarian situation.

The UN human rights office, in its latest count of casualties released Friday afternoon, said it had confirmed that 331 civilians had been killed and 675 injured since the beginning of the Russian invasion. The rights office only reports casualties it has confirmed. It says the real figures are much higher.

Russia in control of Ukraine nuclear plant after attack

The UN’s atomic agency says Russia now has control of Europe’s largest nuclear power plant after its attack last night. The IAEA says Ukrainian staff are still operating the Zaporizhzhia plant, and the safety of its reactors was not affected. 13:05

Dnipro stretches along the banks of the wide Dnieper River near where it meets the Samara. Several garrisoned bridges connect the two parts of town. Tramway lines trace the boulevards in every direction.

Near the train station, there is always a family walking on the sidewalk dragging colourful suitcases toward what they hope is a safer future.

On the platform, men who must stay behind kiss their wives, children and elderly relatives goodbye. Martial law prevents men aged 18 to 60 from leaving the country.

‘We serve all the military defenders of our country’

Anna Chaikovskaia, who leads a local volunteer corps uses her social media following to request provisions for those fighting on the front lines.

People bring them to a distribution centre where they are dispersed to different organisations, good Samaritans and soldiers.

“We serve all the military defenders of our country,” Chaikovskaia said.

“We will provide them with everything they need, [whether] it’s food, toilet paper, soap, medicine … because they protect our native Ukraine.”

In Zaporizhzhia to the south, locals have already placed sandbags around the train station in anticipation of an attack. Inside the town, dust kicks up like in a scene from a cowboy Western. Only a few people walk the streets of the industrial hub. Young people are mostly absent but those who are still around show a readiness to fight.

Ukraine isn’t without its problems, Spiridis says, but he will protect all the country has achieved since it broke from the Soviet Union two decades ago and declared independence.

“[Ukraine] was able to achieve fair elections and a real president despite the pressure of the Putin regime, the annexation of Crimea, the war in Donbas and the deadly inaction of the West.”