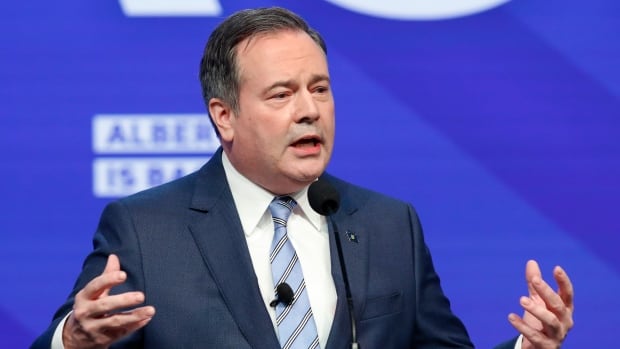 Alberta Premier Jason Kenney was speaking to his party’s caucus staff on Tuesday when he told them how close he came to stepping back from his job ahead of the upcoming leadership review.

“What’s the easiest path for me? Just to take a walk. I don’t need this job. I could go to the private sector, have my evenings, weekends off,” the premier told the gathering.

The remarks are contained in an audio file secretly recorded by someone in attendance and obtained by CBC News.

Kenney then pivots to why he decided to fight to remain in charge of the United Conservative Party (UCP). The leadership review is scheduled to take place in the coming weeks by mail-in ballot after the party board made a last-minute switch from in-person voting because of unprecedented registration numbers.

“I thought a lot about it, honestly, before Christmas, and I decided that would be grossly irresponsible because if we were to have a leadership election in this context, it would, I think, permanently divide us [and] hand the NDP the next election.”

That context, Kenney explained, is the co-ordinated surge of organization from factions of the party he says subscribe to conspiracy theories, COVID denial and general angry sentiments — many of whom also want him replaced.

“I don’t say this stuff publicly, these are just kooky people generally,” he told staff, thanking them for their efforts to motivate “mainstream conservatives” to support him.

“Preston Manning used to say that a bright light attracts a few bugs, well, there’s more than a few bugs attracted to us, this party, right now.”

CBC News asked the premier’s office for comment on and confirmation of the contents of the five-minute recording.

“The comments made by the premier to staff are consistent with previous public statements on this matter,” read the response, in its entirety, from Kenney’s press secretary.

‘A fundamental lack of trust’

On Wednesday, the UCP president announced the party board had voted to change the format of the review to mail-in ballots, after the number of registered voters surged far beyond expectations.

The announcement triggered accusations of cheating, faulty memberships and new questions about the validity of the results little more than two weeks in advance of the scheduled vote.

A group of current and former United Conservative Party MLAs are furious with the party’s last-minute changes to Alberta Premier Jason Kenney’s leadership review process, suggesting the use of mail-in ballots would favour him. A secret recording obtained by CBC News reveals Kenney came close to quitting his job, but decided to stay so he could fight for the party’s identity. 1:58

The party president had originally been firm that an in-person event was the only way to ensure the integrity of the vote.

On Thursday, five government MLAs stood with several constituency association presidents to demand the party not switch the leadership review to mail-in ballots. One called on the premier to resign and another for a leadership election to be launched immediately.

Kenney speaks in the recording about the threat he says some of those against him pose to the survival of the party. He echoed language his campaign staff have been using, with one telling CBC News this leadership review is an attempted “hostile takeover of our party by fringe elements.”

Duane Bratt, a political scientist at Mount Royal University, said the fact a political staff member would feel the need to record and share the premier’s comments shows the party has a major problem.

“It’s a fundamental lack of trust between many grassroots UCP members and the party executive and the premier. This is evidence that that lack of trust extends into his own staff,” he said.

Some party members and MLAs have been pushing back on Kenney’s language when speaking about his opponents within the party.

“This is completely unfounded and unwarranted. It’s a kind of politics of personal destruction,” UCP MLA Peter Guthrie said.

“I am not a right-wing radical,” Rob Smith, an anti-Kenney constituency president from Olds, said on Tuesday, adding this is the time for the party to decide “who we are in our hearts and souls.”

‘The lunatics are trying to take over the asylum,’ Kenney tells staff

In the recording, the premier says this isn’t a typical leadership review.

At a normal convention, he says, “1,300 hungover [Progressive Conservatives] would wake up at a convention hotel on Saturday morning and they’d grab a coffee and they’d stumble in to cast a ballot in the leadership review.

“And 15 or 20 per cent or so — the people that didn’t get the appointment, didn’t get the funding, or the premier didn’t send flowers on their birthday or whatever — they would come and vote against the leader. And then everything was fine. And if that was what I was dealing with, no problems. No problem. Normal internal politics I can handle. I can handle that. There’s nothing normal about this.”

The registration number for this leadership review topped 15,000 people before the party decided to move to mail-in ballots. When the event was originally planned, they expected just under 3,000 people.

According to data from the Kenney campaign, 49 per cent of those 15,000 bought their first UCP membership in the last four months.

Kenney’s tone gets more serious toward the end of the recording.

“I will not let this mainstream conservative party become an agent for extreme, hateful, intolerant, bigoted and crazy views. Sorry to be so blunt with you but you need to understand what the stakes are here,” he said.

“The lunatics are trying to take over the asylum. And I’m not going to let them.”

The UCP said more details are coming on how the online meeting and mail-in ballots will work, and how members can apply for a refund or tax receipt for the $99 registration fee.

The party has also opened up voting to anyone with a valid party membership prior to midnight on March 19. The vote ballots must be received by the party by May 11, and the results of the leadership review will be made public on May 18.

The minimum bar for Kenney to remain as leader is a simple majority of 50 per cent of the vote plus one, per the party’s rules. Kenney has also said that’s his personal definition of success.