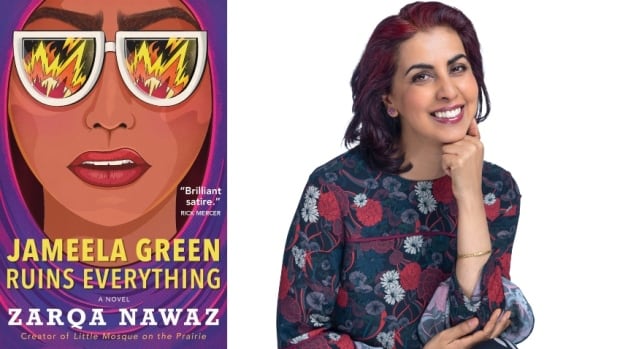 Regina-based author and screenwriter Zarqa Nawaz is perhaps best known as the creator of the mid-2000s CBC TV series Little Mosque on the Prairie, a lighthearted sitcom that tackled the issue of representation and Islamophobia well ahead of its time.

The show’s gentle comedy that poked fun at stereotypes while humanizing ‘The Other’ is a far cry from Nawaz’s latest project: a novel that’s a biting satire about, well, ISIS (though in the book, their amusing acronym is DICK).

If that sounds a tad eyebrow-raising, it’s only one of many wild and wacky plot points in Nawaz’s debut novel, Jameela Green Ruins Everything. With many twists and turns along the way, the book follows Jameela, a disillusioned American Muslim woman who becomes embroiled in a plot to infiltrate an international terrorist organization — and in the process, reconnects with her loved ones and her faith.

Nawaz, who is also the star and creator of Zarqa, a new comedy series airing on CBC Gem later this year, spoke with CBC Books about the process of writing her first work of fiction and navigating a tricky but timely narrative.

From the news to a novel

“The idea for the book first came about when ISIS hit the newspaper headlines all over the world. And I thought, ‘Muslims are forever losing the PR game.’ [laughs] And no one even knew those days where they came from, why they existed, what was happening, what the attraction was — and I wanted to talk about it and write about it, and learn more about it.

“And so it was sort of a journey of learning more about the background [of the group] that informed the book, and in the many years it took to write, the origins and political context in which they emerged started to become more clear.”

“I was chipping away at the book, and it was rejected by the publisher who had published my first book. When I gave them the first draft, they said, ‘No, this is just too over the top.’ And when your editor or your publisher rejects something, that means they won’t give you an advance or work with you. That’s sort of the end of the line.

It was almost like getting a creative writing degree by working with editors because each one would teach me something different about how to write.

“And so that means that you have to hire editors privately on your own — which was in a way a good thing for me. It was almost like getting a creative writing degree by working with editors because each one would teach me something different about how to write — how to create that emotional spiritual character arc, how to ground the character and story.”

“I always had non-Muslim editors, which helped a lot. When there were things that they didn’t understand, they would point them out. But for the most part, they let it ride out, because they felt that people would get it contextually.

“And everybody, even if they’re not Muslim, if they have a relationship with religion — and most people do have some sort of relationship with a religion — they could relate to those specific instances of the prayers, the closeness to God, the questions about the doubt: ‘I don’t understand why God does so many wonderful things for other people, but not me when I’m the one asking.’ That sort of universal spiritual doubt, I think everyone can relate to — maybe even atheists.”

“It was like writing an entire season for a television series — that would have been the parallel. But I have this bad habit of writing without an outline and not knowing what’s going to happen. It’s a more difficult way of writing, because you get caught in plot holes, and you’ve got to solve them as you go forward. It was a really tricky story to write and figure out. And it had to be hilarious — who wants to read a heavy novel about ISIS? [laughs]

“I think of Stephen King — he has a saying that sometimes the process is like where you’re wearing glasses that have Vaseline on them. And that’s what it was like for me in writing this book — I wasn’t always sure where the story was headed. I didn’t even know that Jameela was going to eventually go overseas. And then all of a sudden, I realized she had to go because the imam disappeared. I was inspired by Maher Arar’s story. And that’s why I kept pushing back with the original publisher when they said this is a bit too over the top.  It’s like, no, actually — these things are happening in real life all the time.

It was like writing an entire season for a television series — that would have been the parallel.

“My first book was a memoir, so I knew where the tales were going, and I was very familiar with the story. This, I had no idea — I’d be walking around the lake in Regina, talking to my husband, and he didn’t understand a word I was saying: ‘How is she going to get out of it? How was she going to get there? How is she going to come back?’ And I was just working on the plot and talking my way through it to sort it all out.

“And the book also surprised me — there were days when I would put my writing down and come back to it, and I would be shocked. Like, ‘Oh, I didn’t see that coming.’ And I think maybe when you don’t outline something, you can’t predict it as easily because you’re still coming up with it.”

“I was really nervous [to write a satire about ISIS]. I think that was one of the reasons that the book was such a hard sell. I think the publisher was like, this stuff is too edgy — and maybe too dangerous to publish. But I felt like there was a story that had to be told that was often so misrepresented in the news. There was this period of history where so many people suffered in Iraq and Syria. You know, there’s so much attention now to the invasion of Ukraine. But those things happened to Iraq — the U.S. bombed them for having weapons of mass destruction that never existed. No apology, no reparations — it’s just what happens, as if it’s a normal thing for Muslim people to suffer.

I  was really nervous [to write a satire about ISIS]. But I felt like there was a story that had to be told that was often so misrepresented in the news.

“But it was scary, and I wasn’t sure if [the novel] would ever see the light of day. And to be honest, I don’t think it could have been published at any other time than the one we’re in now. Because now war and invasion are on people’s minds, and we’re seeing the double standards of how one group of people are being treated versus others. And I think the book is coming out at the right time, because that consciousness has been raised, and people are primed to hear the story — and to compare the two wars, and to see how much all people suffer.”

“I mostly write at home. I just find that I’m one of those writers that needs a lot of distractions, and then somehow those distractions just work for me. I’ll give myself a goal of, say, ‘OK, if you write 1,000 words, you get 10 minutes of [online] surfing time.’ [laughs]

So I’ll give myself little goals and rewards. And I like to do a lot of running up or down making tea, eating snacks, that kind of thing. I have to continually take breaks in between — I think what’s happening is that because I haven’t outlined anything, my brain needs a break from the constant churn.

I have four kids — and I find that being a woman with children, you just figure out how to do it in the quiet time that you have.

Two writers I know, Uzma Jalaluddin and S.K. Ali, they invited me to one of their writing retreats at a hotel in London. It was the first and last writing retreat I’ve ever done — I don’t have a lot of those opportunities. But it was really amazing to just sit in a hotel room quietly and just write. I think I wrote something like 50,000 words in that period over a couple of days.

I have four kids — and I find that being a woman with children, you just figure out how to do it in the quiet time that you have. I remember when the school bus would come and take them in the morning, and I knew that they’d be back by 3, 4 o’clock. And that was the only time I was going to have to sit down and just do it — you had to make it work.

Strangely enough, I think I was more efficient with my time when I had less of it — because when they were little, there was a lot less of it. I was more concentrated on my work. And now that they’re older and I have all day, that focus went away, unfortunately. You hear about male authors like Ernest Hemingway, who got up at noon and had a smoke and started writing. Who has that luxury, right? Now suddenly, I do — just without the drinking and smoking.”

She’s the creator of Little Mosque on the Prairie, and now Zarqa Nawaz is starting production on a new sitcom — but this time she’s the showrunner and lead actor. It’s even called ZARQA. Host Shauna Powers checks in. 11:43

“I wanted a novel that had real meaning and depth but also lightness — where if you just want a good beach read and want to lay there and laugh and then put it away, that’s fine; but if you wanted to learn something about the Middle East and its history and open up a lot of doors that you could follow through on, that’s there also.

I don’t really set out writing for a particular audience. I hope it appeals to different people on a lot of different levels.

“Or if you’re not into any of that but are going through a really difficult time emotionally and spiritually, even if you don’t believe in God, there’s a lesson in there about how sometimes we spend a lot of time feeling sorry for ourselves but just need to stop and be grateful for what we have and help other people. And somehow, some way, it always works and things will turn around.

“And so those are the messages that I wanted to get through in the book. I hope it appeals to different people on a lot of different levels. I don’t really set out writing for a particular audience. I just write about things that are affecting me that I try to sort out, and then it just comes out in the world. And this book is interesting in the context of where we’re at in the world.”

Zarqa Nawaz’s comments have been edited for length and clarity.