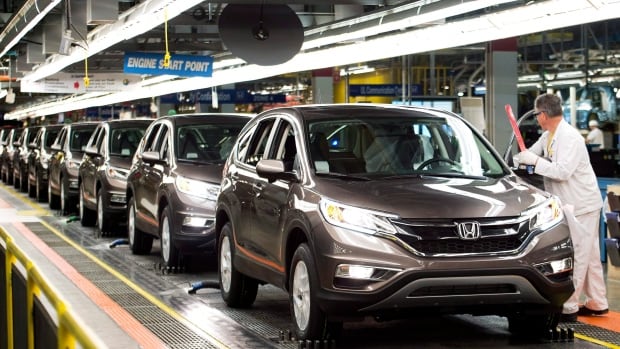 A division of Honda Canada Inc. is set to announce Wednesday that it will spend $1.38 billion over six years to upgrade an Ontario manufacturing plant to make electric hybrid vehicles, an investment that includes millions in funding from the federal and provincial governments.

Honda Canada spokesman John Bordignon confirmed that the 2023 CR-V and CR-V Hybrid will be built in the company’s Alliston, Ont., plant.

A draft news release obtained by The Canadian Press says it will be the lead plant for the 2023 CR-V Hybrid crossover.

The release says the federal and provincial governments will chip in $131.6 million each for the plant’s overhaul for a total investment of about $263 million. The investments were confirmed by a government source.

Honda’s expenditure would bring its total Canadian manufacturing investments to more than $6 billion since 1986, when it became the first Japanese automaker to build a manufacturing facility in Canada.

Prime Minister Justin Trudeau and Ontario Premier Doug Ford are scheduled to participate in the announcement.

It comes as gasoline prices have soared around the world following Russia’s unprovoked invasion of Ukraine that prompted western countries including Canada to ban imports of Russian oil and energy products.

Honda has promised to go fully electric by 2040, making the hybrid vehicle plant announcement a key step on the way toward meeting its goal.

Honda has the capacity to produce more than 400,000 vehicles and 190,000 engines annually, including the Honda Civic and CR-V models for the Canadian and North America markets, as well as for export, the draft news release says. Approximately 100,000 Canadian-built Civic and CR-V units are sold annually in Canada.

Several automakers operating in Canada have made commitments to electric vehicle assembly over the past two years, bolstered by provincial and federal government funding.

The Liberal government promised before last year’s federal election to speed up its goal to see every new light-duty vehicle sold in Canada to be electric. It wants all new cars and light-duty trucks to be zero-emission vehicles by 2035, five years ahead of its earlier plan.

Canada has committed that its economy will either emit no greenhouse gas or offset the pollution driving climate change by other measures by 2050.

Honda’s investment isn’t the first in Canada by an automaker trying to expand its EV offering.

General Motors Co. and South Korea’s Posco Chemical recently announced a deal to spend US$400 million to build a plant in Quebec to produce material for batteries to be used in electric vehicles.

Ford has promised $1.8 billion to retool its sprawling landmark facility in Oakville, Ont., to build EVs while Fiat Chrysler Automobiles plans to spend up to $1.5 billion at its Windsor Assembly Plant to assemble both plug-in hybrid and battery electric vehicles, with at least one new model in 2025.

While Ontario did away with its rebate program for EV purchases, Ottawa offers buyers an upfront discount of up to either $5,000 or $2,500 and sellers then have to claim the incentives to be reimbursed.

However, they represented only five per cent of new cars registered, compared with three per cent in both 2020 and 2019.