Late Irrfan Khan‘s son Babil often goes down the memory lane and shares throwback pictures of the former. Tuesday was no different.

Taking to Instagram Story, Babil shared an adorable picture of his mother and father. In the old image, Irrfan and Sutapa can be seen hugging each other. It is evident from the picture that the couple looks so much in love. 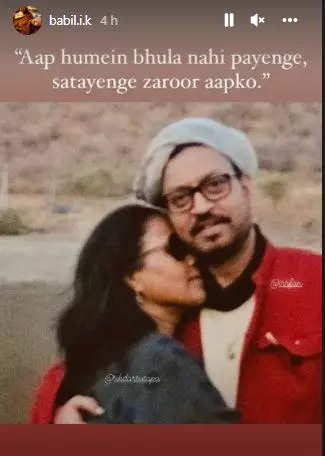 For the unversed, Irrfan’s health had been on the decline ever since he was diagnosed with neuroendocrine cancer in 2018. He had been travelling to London frequently for treatment. Unfortunately, he breathed his last on April 29, 2020.

His elder son Babil is now taking his father’s legacy forward in the field of acting. He is all set to make his acting debut with ‘Qala’ co-starring Tripti Dimri of ‘Bulbul’ fame.