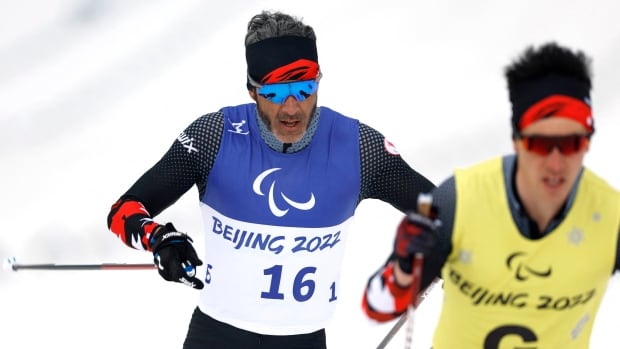 Canada’s Brian McKeever is going out on top.

McKeever announced before Beijing 2022 that he was planning to retire following these Games.

His latest podium appearance is the 20th of his career, and his 16th gold — moving him into a tie for most titles won by a male winter Paralympian with German alpine skier Gerd Schoenfelder.

A legendary finish for a living legend 🐐🇨🇦<br><br>Brian McKeever crosses the line in the men’s visually impaired middle distance event and is poised to win his 16th Paralympic gold medal 🥇 <a href=”https://t.co/ktq9MGSt6y”>pic.twitter.com/ktq9MGSt6y</a>

McKeever, who left the start gate last of 16 competitors, overtook the pace set by the leader American Jake Adicoff around halfway through the 12.5 kilometres and passed most of the other athletes on the course, ultimately crossing the finish line fourth of the skiers.

In the moments following the race, Nishikawa collapsed to the snow with exhaustion as McKeever remained standing and laughing with his guide.

While it was his final individual race, McKeever, who competes in the least severe classification of the visually impaired category, could still be back on his skis for one final event in a team relay on Sunday.

McKeever’s accomplishments are astonishing, but he told CBC Sports in a recent interview that it’s the work and training he’s put into sport since his Paralympic debut in 2002 that he cherishes most.

“The motivation’s always come from within. It’s always been about trying to push myself to be just a little bit better each year than I was the last and experiment with the training, and that’s what I like to do,” McKeever said.

He’s now won all three of his individual races at each of the last four Paralympics.

“I always joke that it’s like making a big presentation to the bosses. It’s not a lot of fun while you’re doing it but if it goes well then you celebrate after,” McKeever said of competing on the sport’s biggest stage.

Well, the presentation is nearly over. It’s almost time to celebrate.