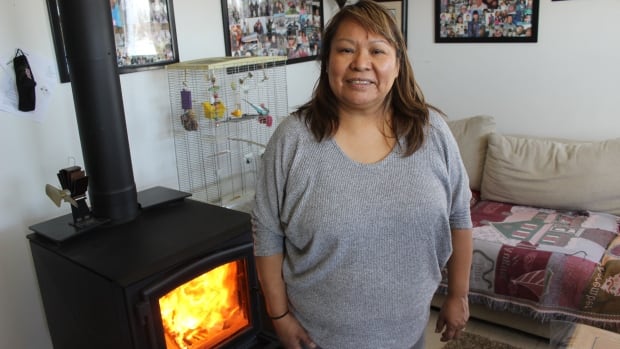 People in Behchokǫ̀ say wood stoves they received for free last fall have been a “blessing” that provide more efficient sources of heat in their homes.

“The old stove wasn’t warming up the whole place,” said Alice Michel Rabesca.  It was in the home home before she moved in, in 1996. She was also told that, because it’s hearth pad was missing, it wasn’t safe.

The program provides EPA-approved wood stoves to homes that didn’t have one before, or that had an old one. The aim is to increase safety and to save money. The new stoves also burn more cleanly, reducing air pollution, and creating more jobs for local wood harvesters.

The Arctic Energy Alliance estimates those 92 stoves saved people from burning 70 cords of wood and 8,500 litres of heating oil. A spokesperson for the organization said the stoves save wood because they’re more efficient, while the oil savings stem from both efficiency and the fact that some recipients didn’t have a wood stove before.

According to the alliance’s annual report, those 92 stoves also reduced greenhouse gas emissions by 25 tonnes — which is the equivalent of recycling 1,000 bags of garbage instead of putting it in the landfill.

“You can put it on low and then [it] can be on all night and it keeps the whole place warm.”

Her home, in the community of Rae, has a furnace too — but it’s expensive to run and Michel Rabesca estimates her household was spending between $5,000 and $6,000 a year on fuel. It’s “much better” to keep the family busy chopping wood instead, she said.

Ernestine Weyallon agrees. She received a wood stove last year too, and said chopping wood is “good exercise” and a “good family get-together.” She went with her brothers and her 18-year-old daughter for the first time last fall.

“My brothers, they chop. My daughter hauls it with a four-wheeler. Me, I learn to use the chainsaw,” she said.

A wood stove is also more reliable if the power goes out, she noted.

Richard Bonnetrouge, an elder living in Edzo, buys wood for his new stove instead of chopping it himself. He said it burns more quickly because it’s dry, and is not freshly harvested.

“It only goes for about four or five hours,” he said.

Bonnetrouge said a cord of wood costs about $500, and would last him about two to three months if he was using his wood stove steadily.

It’s expensive, but still, it’s better than relying on the furnace.

Bonnetrouge said the stove they used to have came with the house, when his wife Roberta purchased it 15 years ago. It had a fan to help distribute heat more evenly around their home, and he’s hoping to install a fan on his new stove too — so the furnace doesn’t kick on as often.

“There’s quite a few [people] in Edzo burning wood now because of the fuel cost. So a lot of people are turning to wood stoves,” he said. “It was a blessing when we got this big one because it puts out a little better heat.”