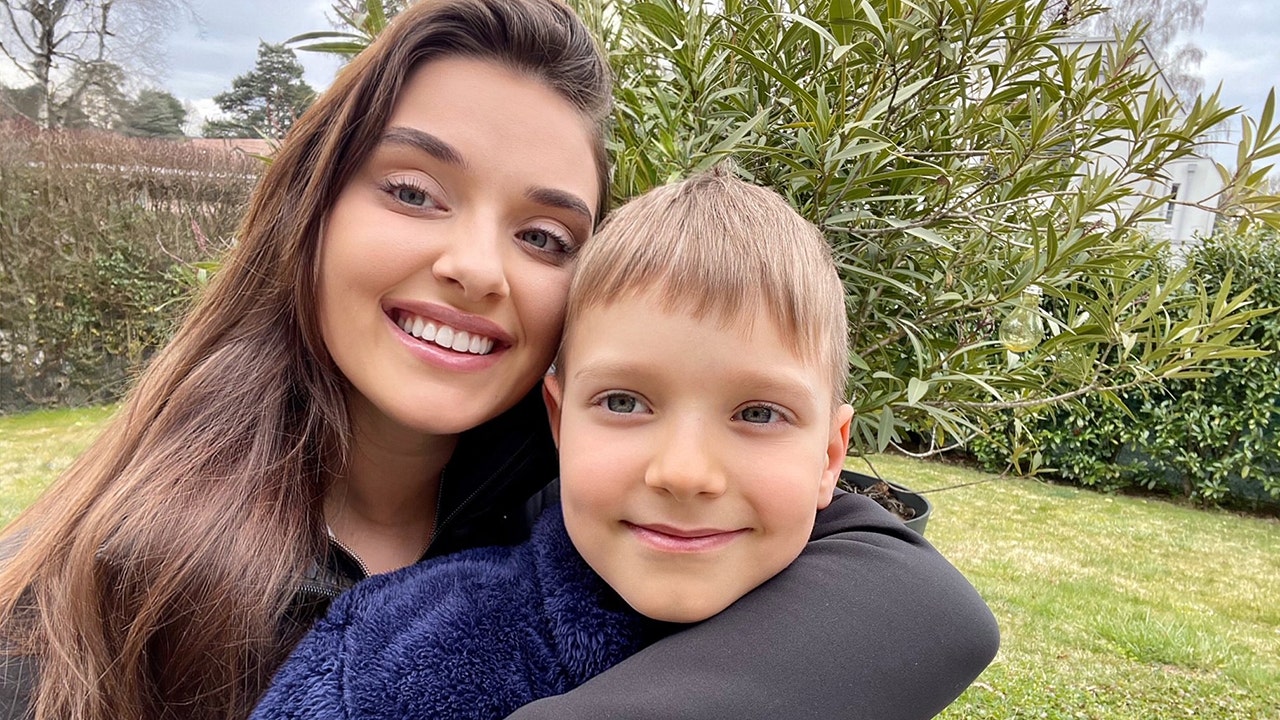 At 5 a.m. on Feb. 24, Veronika Didusenko woke up to the faint sounds of sirens – ones she’s never heard before. They became louder as they got closer.

Kyiv, the capital city of Ukraine, was being bombed by Russian forces as they invaded her homeland.

“I turned on the news and went to my Facebook feed to find out what was going on,” the 26-year-old recalled to Fox News Digital. “I saw my friends were posting things like, ‘The war has started. The Russians have invaded Ukraine and they are bombing Kyiv.’ I was so shocked. I just took all of my clothes – I already had my luggage ready. I woke up my son [Alex], and I took him to my car. I just started driving to the west of Ukraine. I had to get out of there.”

Veronkia Didusenko was crowned Miss Ukraine in 2018.
(The Press Service of Veronika Didusenko)

The beauty queen, who won the title of Miss Ukraine 2018, first realized something was wrong several days before – on Feb. 18. At the time, American President Biden said he was convinced Russian President Vladimir Putin had decided to invade Ukraine and that he believed Russian forces would target Kyiv “in the coming week” or sooner.

“I remember he spoke about how they noticed many soldiers on the border of Ukraine and that they would invade,” Didusenko explained. “Putin had pretty much set the date. After I heard that speech, I really started to get worried about the safety of our country, of my family, and all of those in Ukraine. I would check the news all the time. That’s why I had my suitcase ready. Just in case.”

“I spoke to many of my friends and some said, ‘We’re staying, we don’t believe Putin is going to go this mad, this violent and start a war,’” she continued. “But I was very frightened. Even after Biden’s speech, I remember I went to a café in Kyiv, and there were so many foreigners. I was sitting there, thinking, ‘What are they doing here? Why are they still in Ukraine after all of these announcements and warnings? After the Biden administration said Americans need to leave Ukraine as soon as possible?’ But people were sitting there having their lunch. Everything was peaceful. There was no sign of a Russian invasion to come.”

Since the invasion occurred, hundreds have been reported dead or wounded, including children. According to the United Nations, more than a million Ukrainians have also fled to safety. The attack, ordered by Putin, has drawn condemnation around the world as well as increasingly severe economic sanctions against Russia.

For Didusenko, she was determined to find safety for herself and her 7-year-old. She, along with thousands of other families, left the city. Countless cars formed a traffic jam on the highway on the way out of Kyiv that lasted for hours, she said.

“It took us two days to get out of Ukraine because of huge traffic jams,” she said. “Everyone was rushing to the border as well. I was driving with military cars on one side and tanks on the other side with Russian helicopters flying above my head. I was very scared for my life and my son’s. There wasn’t enough food, enough water. You especially couldn’t sleep with the sirens going on all the time. Every noise from a car or plane made me look around. I was worried that it was a rocket, a bomb or someone shooting. I can’t even begin to imagine what the people who stayed are going through. I knew I had to survive.”

Didusenko admitted that she is still recovering from the sights and sounds she witnessed. Even as she spoke, her voice trembled. Didusenko noted how lucky she was, as not everyone had the chance to flee. She noted that bridges have been destroyed since she left and others have been killed in their attempt to find refuge.

“All that mattered to me was saving my son’s life,” she said. “I just took my stuff and left quickly. At that moment, you don’t care about anything else. You’re just thinking of finding safety, a place where there are no rockets, bombs or sirens. It’s the only thing you can think of to try to save your life.”

According to Didusenko, she and her child traveled through three countries before they finally arrived in Switzerland, where she had friends. After arriving in Geneva, she headed to Los Angeles, where she was scheduled months in advance to speak alongside Gloria Allred on March 8 – International Women’s Day. Her goal this time, she said, was to make a public plea on behalf of Ukrainians under attack.

“I wanted to speak about the war, about the devastation in Ukraine that I witnessed with my eyes,” she said. “I wanted people to understand what was going on. I have a U.S. visa, but my son doesn’t have one. I went to the United States embassy in Luxembourg to apply for a visa for him. But he was denied. The embassy did not issue a visa for my son. I was so shocked. They said to me, ‘You can leave your son in Europe with your friends and go to the U.S.’ And I was like, ‘Are you serious? After the bombing in Kyiv, after everything we experienced, I now have to leave my son in Europe?’”

“This is a horrible situation,” she said. “So many women and children who’ve fled cannot truly enter the United States because they cannot be issued a visa in time. During my press conference with Gloria Allred, we spoke about the fact that women and children fleeing for their lives must be given something like temporary protected status or humanitarian parole so that they can have a chance to go to the United States if they wanted to.”

Didusenko said friends in Switzerland, who had moved to Geneva six months prior, volunteered to care for Alex while she traveled to Los Angeles. During her talk with Fox News Digital, Didusenko was headed to LAX to take a flight back to Geneva. She has since been reunited with Alex.

“It’s so traumatizing for a child to experience war,” she said. “Whenever he talks to our friends, he tells them, ‘My mommy took me away from Ukraine so that I don’t get shot.’ He understands the whole situation, how serious it is. But he also understands that I would do everything to protect him.”

Didusenko’s news conference with Allred wasn’t the first time she spoke up about issues impacting women in her native Ukraine. Just days after she was crowned Miss Ukraine in 2018, Didusenko was stripped of her title for being a divorced mother, which is against entry requirements, People Magazine reported. According to the outlet, she started the nonprofit Right to Be a Mother in hopes of changing the rules for the Miss World and Miss Universe pageants.

Despite the ongoing conflict, Didusenko commended Ukrainian President Volodymyr Zelenskyy for being “an amazing leader.”

“He’s handling this extremely well,” she said. “He’s a leader trying to do everything possible to unite our people, to keep them strong… This war is a tragedy for Ukraine. Now people are forced to fight or flee for their lives. It is terrorism against a peaceful, independent, democratic country.”

When asked what is giving her hope today, Didusenko replied, “you don’t need any hope.” But she is certain that “one day, sooner or later,” Ukraine will thrive as “an independent, free country that is more united and strong.”

“You just have to do the best you can to fight for yourself, for your future, for the future of Ukraine,” she said.