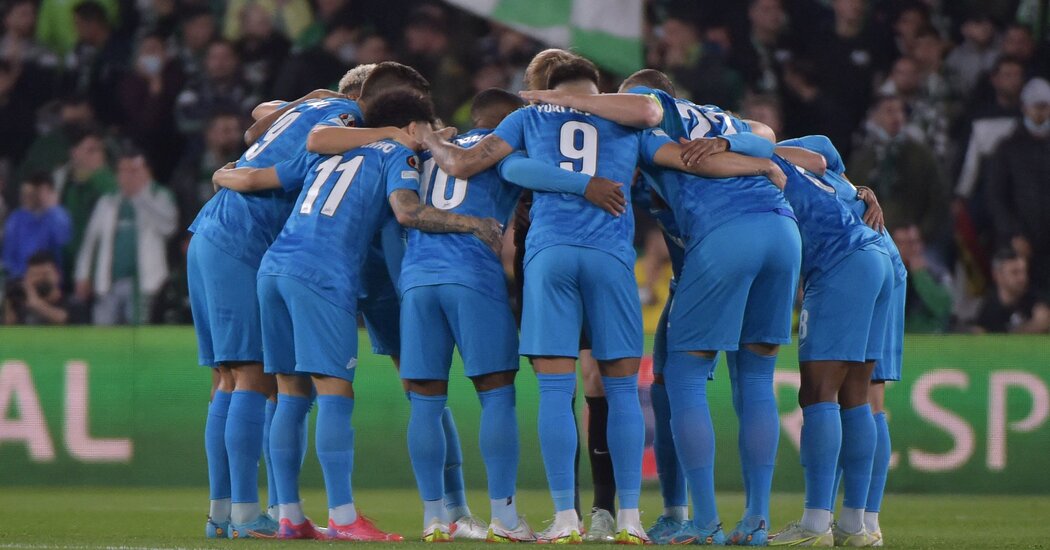 Having decided that Russian teams cannot play international soccer for an indefinite period because of the country’s invasion of Ukraine, soccer’s governing body is now planning to announce that foreign players contracted by Russian teams can suspend their contracts and move elsewhere — at least temporarily.

The decision will affect about 100 players, who will be able to set aside their Russian contracts and sign with new clubs through to June 30. The measure stops short of what groups representing players and worldwide leagues had requested. In a joint letter, reviewed by The New York Times, FIFPro, the largest players union, and the World Leagues Forum, an umbrella organization for more than 40 competitions, had asked FIFA, soccer’s global governing body, that athletes be allowed to leave Russia permanently.

The request has created an awkward situation for FIFA. The organization had broken precedent when it moved to punish Russia for its actions in Ukraine — including barring Russia’s national team from qualifying matches for this year’s World Cup — but allowing players to break their contracts, especially outside of soccer’s traditional winter and summer windows, was potentially far more problematic.

Talks over the weekend between the player groups and FIFA, which also included lawyers for European soccer’s governing body, UEFA, and club representatives, failed to reach a consensus, with officials said to be concerned about setting a precedent. Instead, FIFA has decided that players who want to leave Russian teams can do so but must return after June 30.

An official statement is likely to come as soon as Monday. In their letter, FIFPro and the leagues group suggested that some players were no longer comfortable playing for Russian teams after the invasion of Ukraine.

“These foreign players may rightfully consider that they are not willing to represent any longer a Russian team and should be able to immediately terminate their contract with their employer without facing any sanction whatsoever from international bodies and to be registered in a new club without being restricted by transfer period regulations,” the letter said.

Under local rules, Russian clubs can have as many as eight foreign players, known as legionnaires, on their rosters. The current Russian champion, Zenit St. Petersburg, has five Brazilians, a Colombian, a Croatian and a player from Kazakhstan on its squad.

At least one club, Krasnodar, announced last week that it would allow its foreign players and coaching staff to suspend their contracts. Its German coach, Daniel Farke, the former manager of the English Premier League club Norwich, quit less than two months into his contract without overseeing a single game. But foreign players continued to suit up for Russian teams in the most recent round of domestic league games over the weekend.

Russia’s declaration of war has exposed gaps in the statutes under which sporting organizations like FIFA are organized. After the invasion began, and drew worldwide condemnation, FIFA lawyers and officials scrambled to find a way to take action that could be justified under its regulations. At first, officials proposed measures that stopped short of an outright ban: Russia was to be prohibited from playing on home soil and barred from using its flag and even its name. But that punishment unraveled within 24 hours when Russia’s opponents — and about a dozen other countries — announced that they would refuse to share a field with Russia wherever, and whenever, games were to be played.

A day later, FIFA threw Russia’s teams and its clubs out of world soccer. But its lawyers are already bracing for a fight over the decision. Russia’s soccer federation has called for an expedited hearing at the Court of Arbitration for Sport in order for a decision to be made before March 24, the date when it was supposed to host Poland in a World Cup qualification playoff.

Protests in Russia. Amid antiwar rallies across Russia, the police said more than 3,000 people were arrested Sunday, the highest nationwide total in any single day of protest in recent memory. An activist group that tracks arrests reported detentions in 49 different Russian cities.

Russia has argued that FIFA does not have legal standing to eject it from the competition.

FIFA officials are privately anxious about the case, knowing that Russia may be able to test the legitimacy of the decision. FIFA’s argument is expected to rely on the organization’s supremacy as the World Cup organizer to have a smooth-running tournament and ensure the safety and security of its participants.

Russia already has approached potential arbitrators for the case. (Both sides are able to appoint one, with the president of the arbitration panel appointed by the court.) The hearing, regardless of the outcome, is likely to lead to renewed scrutiny of the court, a largely opaque body that holds most of its hearings behind closed doors.