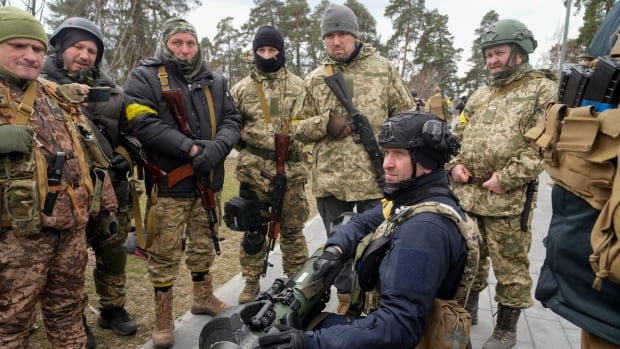 The risk of Canadian weapons shipments being lost, stolen or otherwise misused is growing as the war in Ukraine enters a chaotic and uncertain new phase.

And with shipments of Canadian weapons still due to arrive in Ukraine, some are warning that parts of those shipments could end up on the black market or be turned against the Ukrainian people by the Russian military or local paramilitary groups.

“There is the real threat that the Ukrainian government can potentially not control all of these weapons,” said Kelsey Gallagher, a researcher with Project Ploughshares, a Canadian non-government disarmament group.

“They could end up anywhere.”

Since the start of the Russian invasion, Canada has pledged military aid to Ukraine valued in the tens of millions of dollars. The promised aid includes anti-tank systems, rockets, handguns, machine-guns and ammunition.

Those weapons are being provided exclusively to Ukraine’s ministry of defence and its armed forces — but experts say it’s impossible to know for certain where those weapons might eventually end up.

While Russia has escalated its attacks across Ukraine in recent days, the Ukrainian military has so far managed to fight off Russian advances on most of its largest cities, leaving the outcome of the war entirely uncertain.

“We cannot exclude entirely the possibility that some of that weaponry will end up in the wrong hands,” said Costanza Musu, a University of Ottawa professor specializing in international security.

Musu described how Western weapons shipments to Afghanistan, Saudi Arabia and Libya went missing or were misused in the past.

The chaos that followed the 2011 Libyan civil war resulted in the spread of weapons across Africa. Some of those weapons went to the terrorist groups Boko Haram and al Qaeda via the black market, the United Nations has said.

What could happen to weapons in Ukraine?

There are many possible outcomes for the weapons being sent to Ukraine by Canada and NATO allies, although nearly all of them include the risk of materiel going missing.

“Whenever this conflict does subside … these weapons aren’t just going to go ‘poof’ and disappear,” Gallagher said.

“Of course I support the possibility of giving these to the military units of the Lugansk and Donetsk people’s republics,” Putin said on March 11.

The Kremlin specifically listed anti-tank systems — which Canada is providing to Ukraine — among the weapons that could be handed over to those groups. It’s not clear if any Western weapons have been captured by Russia.

Gallagher also said he worries about paramilitary groups now operating in Ukraine, some of them linked to far-right extremism.

“I do think that surging huge amounts of weapons into Ukraine, where there might not be the capacity to fully absorb them and to ensure that they’re going into the hands they’re supposed to be going, could in the long run be a disservice to the Ukrainian people and civilians in the region,” he said.

A drawn-out conflict could also lead to Canadian weapons turning up on Ukraine’s small-arms black market, described by the Global Organized Crime Index as one of the largest in Europe.

What Canada is doing to keep track of its weapons

In a statement to CBC News, the Department of National Defence said only that its military donations to Ukraine “are controlled with end users certificates provided by the MoD of Ukraine.”

Those certificates typically stipulate who is allowed to use a weapon and for what. The government did not provide specific details about those agreements.

Canada also has responsibilities as a party to the Arms Trade Treaty, which governs the international trade in weapons.

The treaty would require that Canada conduct a thorough risk assessment before sending weapons to Ukraine. The government has not made public details of that process, but experts say it would have examined the possibility of weapon shipments being diverted.

Musu said Canada and Western allies appeared to reach the same conclusion — that the need to help Ukraine defend itself outweighs the risk of Western weapons being misused.

“There are not that many alternatives,” Musu said. “What most governments have felt is that the only thing they can do to shift the odds a little bit … is to support Ukraine militarily.”