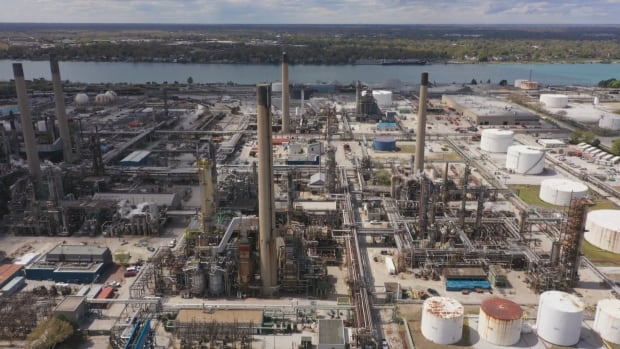 In November, the province ordered Imperial Oil, Shell and Suncor in Sarnia to reduce their emissions of sulphur dioxide — a pollutant that affects the respiratory system — by 90 per cent. Another facility in Mississauga must reduce its emissions by 80 per cent.

The decision states that feedback was carefully considered, and the change was made “as facilities stated they need more time to make these significant changes to their operations.”

Some regulations, however, will still be in effect as of Dec. 31, 2026, resulting in a 20 per cent reduction in emissions in the Sarnia area, the decision states.

The environmental law charity Ecojustice is upset with the delay.

Community groups including Ecojustice were asking the government to set a deadline earlier than 2026. MacDonald says the two-year delay will further affect the health of people in the Sarnia area.

“Canada’s way behind other jurisdictions and particularly the U.S. in terms of regulating pollution from refineries, ” she said.

The oil industry asked the government for an extension on the grounds it needed more time to make the necessary changes to the equipment and facilities.

“Some of the measures that are needed to be put into place require extensive planning and major equipment is required. Some are difficult to source and some need to be ordered well in advance,” said Lisa Hanke, the director of government and stakeholder relations for the Canadian Fuels Association, which represents the transportation fuels industry.

“If a part needs to be brought in from far away, it needs to be ordered, it takes time to produce the specific part and then the facilities can’t just shut down. They need to do it on a schedule that they already have, and that has to be planned well in advance,” said Hanke.

However, Ecojustice says the industry has had plenty of time. MacDonald says they should have started upgrading their infrastructure in 2016, when Ecojustice and the province started talking about updating air quality standards.

“If they had prioritized it, they could have started years ago in getting ready for the new sulphur dioxide standard,” she said.

Ecojustice is also disappointed the new regulations don’t do anything more to address emissions in a process called flaring — where excess gases are burned off.

“The thing with flaring is that the emissions are very intense and can be in a very short period of time, which causes spikes in air quality concerns,” said MacDonald. “So the air quality can go up quite a bit during a flaring event because of the massive amount of sulphur dioxide that can be emitted during a flaring event, depending on what they’re flaring, particularly if they’re flaring something called acid gas.”

However, Hanke says flaring actually reduces emissions that would otherwise be going into the atmosphere.

Sarnia Mayor Mike Bradley says he thinks “everyone has a common goal. We need to reduce the emissions.”

Bradley isn’t sure if the industry needs two more years to do that, but he says it has to be done in a way that doesn’t put too much burden on the industry.

“The reality is our competition is Alberta and the Gulf Coast in the U.S. and all we’re saying is, yes, we support the environmental agenda, but you also need to look at how you’re treating our industry as it relates to regulation and taxation,” said Bradley.

The Aamjiwnaang First Nation, which sits in the shadow of an oil refinery, wanted the timeline shorter too, but a spokesperson tells CBC news that officials there aren’t ready to make a comment on the extension.